“All too often in the academy, modesty shields the accomplishments,” Provost Michaele Whelan said at a Faculty Appreciation Reception held during Faculty Assembly on September 25 in the Bordy Theater. “Let’s invoke Walt Whitman [and] sing one another and enjoy.”

The following are faculty who were recognized at the Appreciation Reception, plus some late entries not necessarily mentioned at the event. FAFGs are Faculty Advancement Fund Grants, awarded to tenured and tenure-track faculty to enhance creative or scholarly work. AFDF’s are Affiliated Faculty Professional Development Fund grants, do the same for affiliated faculty.

Associate Professor Ruth Grossman was awarded a FAFG for her project, “Social Signals During Partnered Classroom Engagement of Children with Autism Spectrum Disorder”.

Assistant Professor Rhiannon Luyster received a Family Research Grant from the American Philosophical Society to support a lab-based study of language use in children with autism spectrum disorder. Luyster and her students had two posters accepted to the annual meeting of the International Society for Autism Research. She also participated in the Research Mentoring Pair Travel Award Program at the 2017 American Speech-Language-Hearing Association convention in Los Angeles, mentoring a Boston University doctoral student.

Sandy Cohn Thau, director of clinical education and Graduate Program director, won the 2018 Massachusetts State Clinical Achievement Award for “contributions to the advancement of knowledge in clinical practice in audiology or speech-language pathology.”

Professor Phil Glenn co-edited Studies of Laughter in Interaction, which received a favorable review in the latest issue of the New York Review of Books.

Chair Greg Payne was recognized for 35 years of teaching at Emerson.

Associate Professor and Assistant Dean of the School of Communication Paul Niwa was awarded a FAFG for his project, Senator Inouye: Making a More Perfect Union.

Associate Professor Seounmi Han Youn won a Best Paper Award for “The effect of Facebook newsfeed ads on teens’ information disclosure: The interplay of persuasion knowledge, benefit-risk assessment, and ad skepticism” at the 17th International Conference on Research in Advertising held in Valencia, Spain in June.

Professor Sam Binkley published “Biopolitical Metaphor: Habitualized Embodiment Between Discourse and Affect” in the journal Body & Society in May. In April, Binkley gave a presentation titled “The Shameful Body of Whiteness: Against Racial Interiority” at the annual meeting of the Foucault Circle in Cleveland.

Associate Professor Nigel Gibson co-authored a book, Frantz Fanon, Psychiatry and Politics, published in the last year. For the launch, Gibson and Achille Mbembe discussed Fanon’s ethnopsychiatry at a special event last July at Wits University in Johannesburg, South Africa. Gibson also was a keynote speaker at the 5th Annual International Conference of the Centre for Phenomenology in Johannesburg.

Assistant Professor David Kishik gave a keynote address this spring at a conference at the University of Jena in Germany titled Urban Walking: The Flâneur as an Icon of Metropolitant Culture, where he presented his paper “The Schizoid City.” This summer, Kishik read his paper, “The Work of Dance in the Age of Sacred Lives,” at the Jacob’s Pillow Dance Festival in Becket, Massachusetts, as part of the world premiere of Paramodernities by choreographer Netta Yerushalmy.

Senior affiliated faculty member Cynthia Miller edited Divine Horror: Essays on the Cinematic Battle Between the Sacred and the Diabolical. She also co-edited Horrific Humor and the Moment of Droll Grimness in Cinema.

Assistant Professor Tylor Orme received a FAFG award for his work on “The Impact of ‘Let’s Play’ Videos on Video Game Revenue.”

Professor Eiki Satake delivered a research paper, “Teaching Probability and Decision Making Theory Through the Game of Squash,” at the 44th Annual New England Mathematical Associaiton for Two-Year Colleges (NEMATYC) convention in April. He also was recognized for his 30 years at Emerson.

Assistant Professor Diana Sherry co-edited The Arc of Life: Evolution and Health Across the Life Course.

Professor Tulasi Srinivas won a senior short-term fellowship from the American Institute of Indian Studies for her forthcoming book, The Absent Goddess: Religion, Ecology and Violence in Urban India.

Assistant Professor Erika Williams received a FAFG award to work on Versions and Subversions of Genre and Gender in Modernist and Contemporary Africana Literature. In May, she presented a paper, “Subversions or ‘Perversions’ of Passing?: Race, Gender, and Queer Sexuality in Linda Villarosa’s Passing for Black and Helen Oyeyemi’s Boy, Snow, Bird” for the American Literature Association’s annual conference in San Francisco. Williams also presented two public lectures at UMass-Amherst as part of her fellowship at UMass’ Du Bois Center and this fall, will be a visiting scholar participating in Bentley University’s Valente Center Humanities Research Seminar of 2018-2019, which will explore “Intersectionality at the Intersect of Disciplines.”

Distinguished Artist-in-Residence P. Carl is spending Fall 2018 in Germany on a Berlin Prize fellowship while working on his forthcoming book, Becoming a White Man.

Associate Professor Kathleen Donohue was recognized for 40 years of teaching at the College.

Affiliated faculty member Jennifer Farrell completed the first year of her doctoral program. She also choreographed Guys and Dolls and directed and choreographed Damn Yankees for the Priscilla Barn Theatre in Plymouth, Massachusetts.

Assistant Professor Bethany Nelson won the Ann Flagg Multicultural Award from the American Alliance of Theatre and Education. She had pieces published in journals Applied Theatre Research (“Radical Practice: Devising as Activism”) and Youth Theatre Journal (a book review of Jay Gillen’s Educating for Insurgency: The Roles of Young People in Schools of Poverty). Her paper, “Loyalty, Longevity, and a Community of Influence: Playmaking with Urban Young Adults,” has been accepted for publication in Youth Theatre Journal in April 2019.

Associate Professor Magda Romanska won the Elliot Hayes Award for Outstanding Achievement in Dramaturgy from the Literary Managers and Dramaturgs of the Americas, and she was an Apothetae and Lark Theatre Playwriting Fellowship Finalists for writers with a disability, supported by the Time Warner Foundation. Romanska also co-edited Reader in Comedy: An Anthology of Theory & Criticism.

Professor Maureen Shea was recognized for 30 years of teaching at the College.

Senior Distinguished Artist-in-Residence Scott Wheeler received an Arts and Letters Award from the American Academy of Arts and Letters, and a MacDowell Colony Fellowship in Summer 2018. He also contributed songs to the album, Light Enough, and was recognized for 40 years at Emerson. 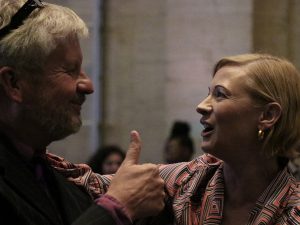 Affiliated faculty member Gautam Chopra received an AFDF for What Are Your Thoughts on Bowling?

Professor Tom Cooper was recognized for 35 years of service to the College.

Assistant Professor Leslie McCleave received a FAFG for The Work of the Science Filmmaker.

Affiliated faculty member Tanju Ozdemir received an AFDF for Alexander at the End of the World.

Professor Shujen Wang was recognized for 20 years of teaching at Emerson.

Associate Professor Jabari Asim was named a Trustee of the Boston Public Library and received a Live Arts Boston grant.

Senior Writer-in-Residence Lise Haines published her novel, When We Disappear.

Senior affiliated faculty member Alden Jones wrote the piece “My Son Loves Guns” for The Cut. It was reprinted in the New York Magazine issue on “how to raise a boy.” Jones also moderated a roundtable discussion on travel writing that appeared in The Chattahoochee Review, and on the podcast Deviate. She co-directs the Cuba Writers Program, and is core nonfiction faculty at the Newport MFA Program in Creative Writing at Salve Regina University.

Affiliated faculty member Katherine Kim received an AFDF grant to work on The Language of Haunting.

Chair Maria Koundoura was recognized for 25 years of teaching at Emerson.

Affiliated faculty member Vassiliki Rapti published Ludics in Surrealist Theatre and Beyond, and translated Avaton by Dimitrios I. Bafaloukos; Light Breeze in Paradise by Carmen-Francesca Barciu; and translated and edited Nightfall Hotel: A Surrealist Romeo and Juliet by Nanos Valaoritis.

Affiliated faculty member Matthew Scully received an AFDF grant to work on Refractions of the Subject: Identity Politics and Voting. Scully’s review of Scott Henkel’s Direct Democracy: Collective Power, the Swarm, and the Literatures of the Americas, was accepted for publication in the June issue of sx salon: a small axe literary platform. His article “Plasticity at the Violet Hour: Tiresias, The Waste Land, and Poetic Form” appeared in the spring 2018 issue of JML: Journal of Modern Literature and his post “Disordering Modernism: On T.S. Eliot’s The Waste Land,” was published on the JML blog in August.

Professor Daniel Tobin published The Stone in the Air: A Suite of Forty Poems from the German of Paul Celan, and was awarded the Boston Authors Club’s Julia Ward Howe Award for his book-length poem, From Nothing.

Senior Distinguished Writer-in-Residence Jessica Treadway was recognized for 20 years of teaching at the College.