Then and Now: The Little Building’s Big History

This is the fifth and final in an Emerson Today series looking at old Emerson College properties as we reopen the Little Building. Read about the history of 6 Arlington Street, 100 Beacon Street, 150 Beacon Street, and 69 Brimmer Street. 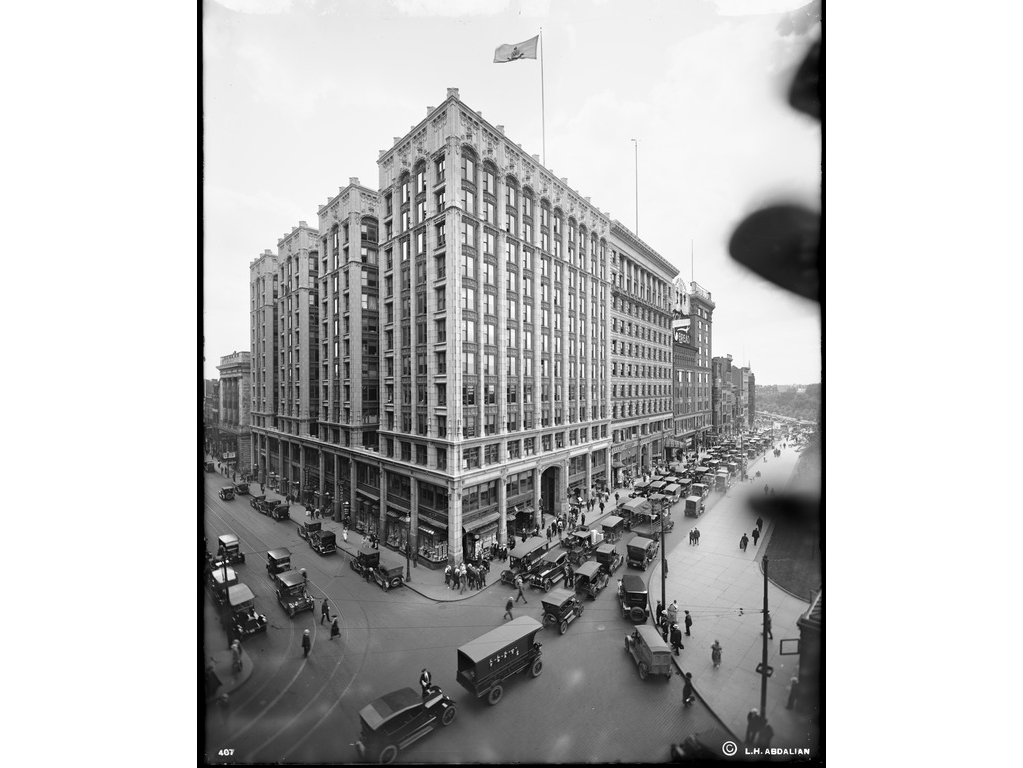 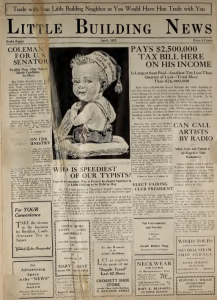 Not too many buildings can boast having its own newspaper. The Little Building can boast away!

Designed by Clarence Blackall and named after John Mason Little, the Little Building was built in 1917 on the site of the Hotel Pelham, when Emerson College was called the Emerson College of Oratory. The Little Building, located at 80 Boylston Street, was truly ahead of its time, being one of today’s trendy development buzz words — a mixed-use development — with retail, commercial, and office space.

The Little Building News was published by tenants of the building from 1922 to 1925. The paper included photos; a directory; events; news, such as new shops in the subway station; facts and articles about the building, like “How Much Do You Know About The Building Where You Work?;” cartoons; advertisements; and more. The Little Building News was later donated to Emerson College’s Archives.

Who Was John Mason Little?

Born in 1848, his family’s lineage traces back to Plymouth colonists. Little began his career in a dry goods store about a block away from the Little Building on Washington Street, according to Bob Fleming, former Emerson College archivist and library executive director. Later in life, his primary business interests were real estate and management of the Pelham Trust… which was responsible for the construction of… the Little Building. As we all know, it’s often about who you know, or who controls the cash.

Little would be happy to know that Emerson College chose to restore the building that bears his name, as he was a big supporter of preserving historic landmarks in Boston, and was a founding member of the Society for the Preservation of New England Antiquities.

Who Was Clarence Blackall?

A New Yorker, Blackall came to Boston in 1884, and was a senior partner in the architectural firm Blackall, Clapp and Whittemore, where he designed the first entirely steel-framed office structure in Boston in 1894, reported Fleming. Blackall is best known for designing 14 theaters, including the Wilbur, Metropolitan (now the Wang), and the Colonial. He was a member of the Boston Society of Architects and the first president of the Boston Architectural Club. 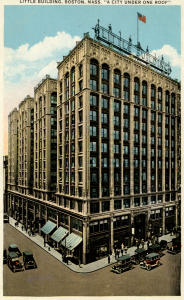 Postcard of the Little Building from Emerson College’s Archives

Blackall designed the Little Building in the Modern Gothic style with a steel frame and a two-story Tudor-arched entrance on Boylston Street. The original facade was granite and cast stone, and the floors were made from reinforced concrete.

After being completed in 1917, the building was considered significant enough that it was featured in American Architect and Building News. Historian Walter Muir Whitehill said the Little Building was “the most glamorous office building of the era of World War I.” It was later dubbed the “The City Under One Roof,” as it housed 600 offices, 37 stores, a post office, a restaurant, and underground passageways connecting to the subway and the neighboring Majestic and Plymouth theaters. The passageways have since been blocked off.

The shopping arcade on the first two floors allowed people to stroll and shop without dealing with the noise of Tremont and Boylston streets, or the New England weather.

A Boston Landmarks Commission report in 1978 said the area around the Little Building thrived until the Great Depression hit, and for many years after the Depression, the three major sources of vitality of the area – clothiers, music and piano companies, and theaters – continued to suffer.

Emerson College purchased the Little Building in March 1994 for $5 million, and began renovating the interior in January 1995. The first students moved into the building in September 1995. The building housed 715 students on floors 3 to 12 in one-, two-, three-, and four-bed rooms, as well as suites. There was also a dining hall and meeting spaces on the second floor. Through the years, the first-floor commercial spaces had different tenants during Emerson’s ownership, including a bank, a Dunkin’ Donuts, a Baskin-Robbins, the school’s bookstore, and more.

Faced with the deterioration of the Little Building’s cast stone facade, Emerson decided to renovate and reinvigorate the entire building, rather than raze the beautiful structure that anchors Emerson’s modern campus. Over the past two years, with a design by Elkus Manfredi Architects and construction by Suffolk, Emerson added a 13th floor to LB, expanded it to 1,035 beds, and added glass community rooms that fill in the finger-like spaces on the Tremont Street side. Last week, Emerson’s Class of 2023 moved in.

There’s also a whole lot more to today’s Little Building. Stay tuned for a feature on its rebirth…

Debating the Pros and Cons of Virtual Forensics