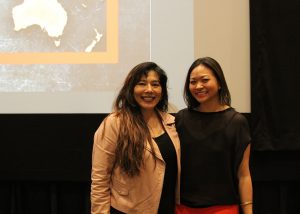 Emerson College alumna Adele Lim ’96 has dropped out as the co-writer to the Crazy Rich Asians sequels due to making far less than her male co-writing counterpart.

Last year’s surprise #1 box office hit, Crazy Rich Asians, took in $238.5 million worldwide, so you’d think that Lim would be paid like her male colleague. But the pay she was offered was staggeringly different. According to The Hollywood Reporter, Lim was offered $110,000-plus by Warner Bros., and co-writer Peter Chiarelli, was offered $800,000 to $1 million.

Lim’s reps were told that Chiarelli was offered more based upon his experience. Prior to Crazy Rich Asians, Chiarelli had two film screenwriting credits, one for the Sandra Bullock rom-com The Proposal in 2009, and Now You See Me 2 in 2016, according to IMBD.com. Crazy Rich Asians was Lim’s first film writing credit, but she has written for numerous television shows, including One Tree Hill, Las Vegas, Life on Mars, Private Practice, and more.

Warner Bros. feared that making an exception would set a precedent, reported The Hollywood Reporter, and debate on the issue went all the way up to studio chairman Toby Emmerich.

There was hope Crazy Rich Asians’ success would usher in a better representation of Asian cultures, characters and behind the scenes people, as it was the first film in “…25 years since the world saw a predominantly Asian cast in a big-budget Hollywood — with 1993’s The Joy Luck Club — that isn’t about martial arts, nerds, or a period piece with subtitles,” reported the New York Film Academy.

“Being evaluated that way can’t help but make you feel that is how they view my contributions,” said Lim. She also said women and people of color often are regarded as “soy sauce” — meaning they’re hired to sprinkle culturally specific details on a screenplay, and are not credited with the substantive work of crafting the story, said The Hollywood Reporter.

Lim was also given another offer closer in scale to Chiarelli in February, and he also offered to split his fee. But Lim didn’t want to go that route.

“Pete has been nothing but incredibly gracious, but what I make shouldn’t be dependent on the generosity of the white-guy writer,” said Lim, according to The Hollywood Reporter. “If I couldn’t get pay equity after CRA, I can’t imagine what it would be like for anyone else, given that the standard for how much you’re worth is having established quotes from previous movies, which women of color would never have been [hired for]. There’s no realistic way to achieve true equity that way.”

Earlier in 2019, well before the news broke, Lim was at Emerson College as the keynote speaker for the 2019 New England Graduate Media Symposium and talked to students about what it takes to be a successful TV writer.

Then and Now: The Little Building’s Big History