This is the second of an Emerson Today series looking at old Emerson College properties as we lead up to the August reopening of the Little Building. Click here to read about the history of 150 Beacon Street. 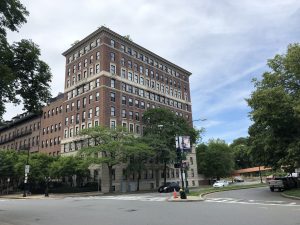 Many Emersonians remember their days of living at 100 Beacon Street, which was used as dormitory for more than 40 years. Being mere feet away from the Hatch Shell provided opportunities for students to hear live performances from their rooms. The prime location leant itself to a quick jaunt to the Esplanade and the Public Garden. 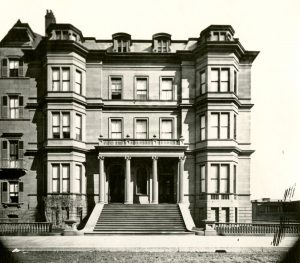 But the current building was not the first structure on the site. That was a residence built for George Hovey in 1856. The Hovey family owned that three-story building until 1900, according to backbayhouses.org. William Spaulding and Dudley Pickman would become the next owners of the property, and leased it to the Noble and Greenough School from 1901 to 1922. The City of Boston then leased it as an annex to Girls’ High School.

On September 23, 1923, 100 Beacon was acquired from William Spaulding and Dudley Pickman by Mary Macdonough. The building was razed in mid-1924 and the current structure was built as a 40-unit apartment building designed by Clifford Albright and George Nelson Jacobs, according to backbayhouses.org and the Emerson College Archives Department’s files. 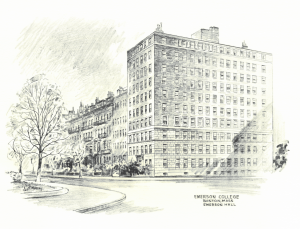 The College purchased 100 Beacon Street on April 29, 1960, from Beaconside Realty for $445,061.77. Two years later, the building underwent a major change to the exterior when much of the ornamentation, including stone roof cornices, pre-cast stone plaques, and more, was removed due to safety concerns.

The College sold the building on August 29, 2006, to BosProp Investors LLC, and at that time it was assessed at $5,766,400.00 by Boston’s Assessing Department. Today it is a 16-unit condominium building. 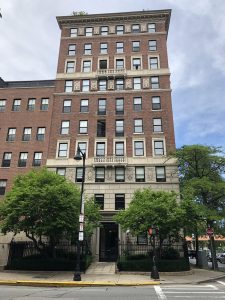 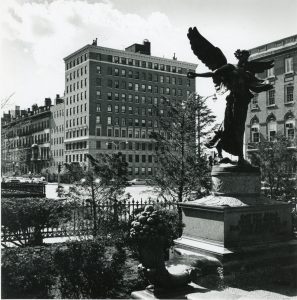 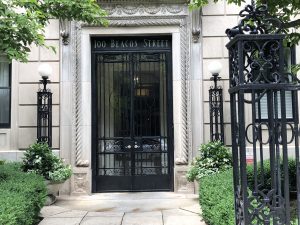 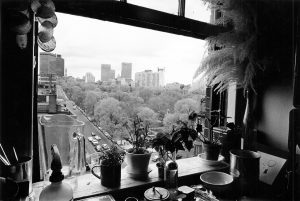