Emerson’s Advancement Group for Love and Expression (EAGLE) and London Mulan, father of the Boston chapter of House of Mulan, are hosting the College’s first ever Vogue Kiki Ball, a celebration of culture and creativity, on Friday, April 26, in the Bobbi Brown & Steven Plofker Gym (which you won’t recognize).

According to Christopher Henderson-West ’20, EAGLE president and mother of Haus of Emerson, Friday’s event, with the theme, “End of an Era,” will be the first ever ball of its kind – with experienced competitors and $3,000 in prize money — put on by a college.

“Emerson is giving their students an open door to experience more than just the everyday college life,” said Lamont Mulan of House of Mulan, co-sponsor of the Ball. “They’re basically saying, ‘It’s O.K. to be yourself, it’s O.K. to experience new things in life. Go for it.”

Typically, balls are sponsored by health clinics or just put on by people in the scene, said London Mulan.

“Emerson’s the only one to actually take it and let it become part of their own teaching. There has never been that type of link between colleges and the culture,” he said.

Kiki Balls spring from the queer and trans people of color (QTPOC) community, and offer opportunities for young (18-24) performers to get experience before entering mainstream balls. As with mainstream balls, contestants “walk” against each other in a number of categories (Emerson’s will have 12 major categories), which include Performance, Runway, Face, Realness, and Glitz & Glamour.

An important part of the Kiki scene is its sense of community. Kiki balls are often sponsored by health centers and are held in community centers. Proceeds of Emerson’s ball will be split between the Office of Student Success’ Student Assistance Fund and Boston GLASS, a nonprofit serving LGBTQ+ youth of color. 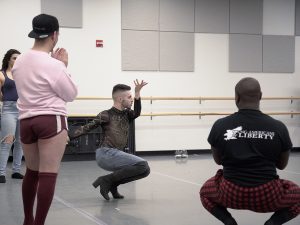 The theme, “End of an Era,” has multiple meanings. For London Mulan, it refers to the Boston Ballroom scene, which is consistently overlooked and having a resurgence. This weekend there will be people coming to Boston from across the country and across the Atlantic to watch and compete in more mainstream events in the city, London said, and some are expected to turn up at Emerson.

For Henderson-West, it reflects the changes EAGLE has undergone in the past year: overhauling their constitution; broadening the meaning behind their acronym (from Emerson Alliance of Gays, Lesbians and Everyone to Emerson’s Advancement Group for Love and Expression); starting Haus of Emerson, the College’s first ballroom house system.

“EAGLE has been rebranding and shifting our focuses, so that we are also kind of ending our own era,” he said.

While there are elements of drag in the competition, the Vogue Kiki Ball, Henderson-West wants you to know, is not RuPaul’s Drag Race.

Another change EAGLE has undergone this year has been to focus more attention on LGBTQ+ people of color, and the Kiki Ball is an extension of that.

“There are very few people on the Emerson campus who look like me and have the same experiences,” said Henderson-West, who is black. “I feel the best way to counteract that is to have events that highlight people of color and give space to that history and culture.”

Leading up to the event, London Mulan and EAGLE have been offering Vogue workshops to Emerson community members who are interested in competing on Friday. In addition to showing people how to duckwalk, the workshops are an opportunity to teach people about Ballroom culture and history.

“We need this moment of joy and celebration of the culture,” said tamia jordan, director of Intercultural Student Affairs, who has been attending some workshops. “I’m so proud of the way the students have done it, by turning it into not just a good time, but turning it into an educational experience.” 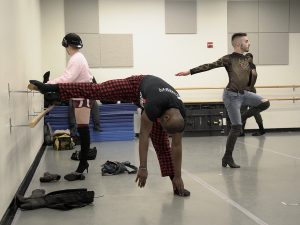 The workshops are also a workout.

As president of Emerson International, Caterina Aragon ’19 is participating in not just the workshops, but the Ball. She’ll be walking in the Virgin Performance competition.

“It requires so much leg strength and so much coordination,” she said. “Having to think about your elements while trying to freestyle and putting your own personality in is really hard. It’s an artform.”

Aragon said she’s been telling as many people as possible about the Vogue Kiki Ball.

“I really want Emerson to see what students can do, the amount of impact they can have on a community,” she said.