Two hundred dollars. That’s all director and writer Peter Horgan ’13 needed to make his short film, Put Your Feet Up, with the help of Rio Contrada ’13 and Cal Ciarcia ’15.

The film will be premiering at the Independent Film Festival Boston (IFFBoston) on April 27. Horgan answered fielded questions from Emerson Today about the film, his career, and how Craigslist inspired him.

Put Your Feet Up Trailer from Peter Horgan on Vimeo.

Q: You wanted to make a short film for less than $200 as a proof-of-concept for a feature length project. Why?

Horgan: I was inspired by filmmakers like Robert Rodriguez, Kevin Smith, Christopher Nolan, and Darren Aronofsky to name a few. People who had made their first features with micro budgets and succeeded in launching careers with those films. I had written a number of feature films I’d like to direct, but they all have budgets that are out of my reach at this time, so I wrote a feature script based around people, places, and props I already had access to. I made the short as a trial run, but also to get people excited for the feature. I knew I’d need a lot of help making a feature so I saw this as a way to get people behind it.

Q: Did you set the budget at $200? Did you have to scratch things that you wanted to do so you wouldn’t go over budget?

Horgan: Originally, I planned on making this short for nothing. I was going to use my wife’s DSLR and shoot it myself. I just accepted that it was going to look and sound rough. [I r]eally didn’t have any festival hopes for the project. Then I showed the script to my friend and producing partner, Rio Contrada.

Rio managed to make this project significantly more legitimate than it ever would have been if I went ahead with my original plan. He convinced our [director of photography], Zach MacDonald, to give up a weekend of his time and to bring his camera and a few tools along with him. Rio was able to borrow some lav mics from another friend. He even managed to get our re-recording mixer, Bob Pepek, to volunteer his expertise to the project. So nothing was scratched out from this project. Every person who joined us and every piece of equipment we used was a gift. The $200 I spent was on a hard drive and food for the cast and crew.

Q: Do you have an idea of a feature length movie you’d like to create and a budget for it?

Horgan: The feature script has already been written. The short is actually just a series of scenes that have been pulled from the feature script.  If need be, I’m prepared to shoot this feature over the course of six weekends at the end of this year with volunteers for cast and crew. That being said, my goal is to raise $150,000, so I can pay my cast and crew for a 12-day shoot and cover all of the costs that come with post-production. 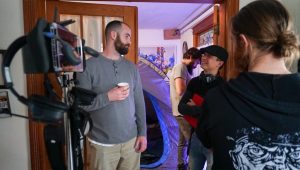 Peter Horgan, left, with Rio Contrada, right with the hat and arms folded, at a recent film shoot.

Q: The short film, which is premiering at IFFBoston, is called Put Your Feet Up and is a “sex positive” short film. What does sex positive mean?

Horgan: The sex positive movement is about accepting every type of sexuality, as long as it’s safe and consensual.

Q: Why did you want to make a short film about this topic?

Horgan: I believe in the ideas of the sex positive community. There’s still too much shame and stigma regarding sexuality in the world. People can’t help what turns them on. So if your desires are safe and consensual, then by all means you should find a willing partner and embrace your sexuality, whatever it may be.

There are two characters in this film. One is an asexual woman. The other is a man who has a fetish for being a footrest. When I tell people about it a lot of people laugh or express to me how strange they think it is. It may be a unique fetish, but I don’t see anything wrong with it. I think the only thing wrong here is that some people never embrace their sexuality because they’re ashamed or embarrassed by it. The main character is one of those people, until this young woman helps him accept his sexuality.

I showed the movie to a handful of friends when we were finished with the edit. I think the best reaction I got was a friend who said that by the end of the film she felt that wanting to be a footrest was normal.

Q: In the film, a man with a unique fetish meets a woman on Craigslist to help him. Can people still meet on Craigslist?

Horgan: Well, personally I don’t do that. But the inspiration for this script came from an actual ad I found on Craigslist. I was living in Athens, Greece, for over a year with my wife. I was working at a British school there and wasn’t making much money. So I took to Craigslist in search of opportunities to make some extra cash. It was there that I found a British man visiting Athens, offering 20 euros an hour to anyone who would put their feet on his back.

My wife wants me to make it clear that I didn’t end up taking this man up on his offer. At the time, I had argued this was an easy way for me to make 40 euros while watching a movie.

Q: What are other projects you’ve worked on?

Horgan: Since graduating in 2013 I’ve written 10 feature-length screenplays, I’ve directed a number of rap videos around Boston, and I wrote and directed a short film called Summer Breeze, about a young mother on Cape Cod dragging her son around in search of her next high. I moved to LA for a bit and then to Greece. Since moving back to Massachusetts in 2017, I’ve teamed up with my old Emerson friend, Rio Contrada, to start producing content. We made Put Your Feet Up together and then I produced and assistant directed two shorts that Rio wrote and directed in 2018 and 2019. We have another short coming up in June that Rio will be producing and I will be assistant directing, but our next focus is making this feature happen.

Also, the narrative feature film The Death of Dick Long, directed by Emerson alum Daniel Scheinert, will be screened at the IFFBoston at the Brattle Theatre on April 25 at 9:30 pm. Click here for more information about the movie.