Emily Blodgett ’16 is running her second Boston Marathon, and raising funds for Tedy’s Team, an organization dedicated to raising awareness and fighting strokes.

Thousands of people participate in the Boston Marathon in a plethora of ways. Emersonians have their hands and feet involved in the marathon in many ways, be it as a runner, one of the thousands of volunteers, or those who work all year with the Boston Athletic Association to make sure the marathon runs smoothly. 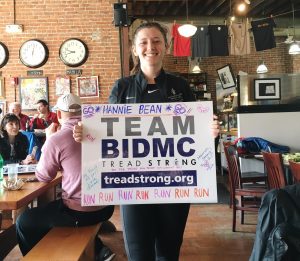 For many runners like Hannah McKeen ’19, it’ll be their first time running the vaunted course. As a Journalism major with a double minor in Marketing Communications and Sociology and Anthropology, Hannah is (Mc)keen on time management.

“There are many mornings before class I wake up and really don’t want to run, but it’s all mental. I’ve learned about self-discipline,” said McKeen, who primarily trains on the Esplanade, running from her Fenway apartment to Cambridge or Charlestown or wherever the sidewalk takes her.

Hannah is also running for the kidney disease research fund at Beth Israel Deaconess Medical Center, so she’s been training with the Heartbreak Hill Running Company.

“After my (grand) papa’s passing in 2001, not a day goes by without thinking about him,” said Hannah, whose father donated a kidney to his father in 1995 after he was diagnosed with kidney disease and renal failure. “My dad’s scar is a symbol of hope and resilience, and I am so proud to tell people their story. My dad and my papa are truly my heroes and running the Boston Marathon for Team BIDMC is the greatest honor.”

Like McKeen, Emily Blodgett ’16, she ran her first Boston Marathon as an Emerson student in 2014.

“When I finished my first Boston Marathon, for a number of reasons, I remember thinking ‘When can I do this again?’ But as excited as I was coming off of that finish, a marathon can be a daunting distance to commit to,” said Blodgett. “I’ve covered the course during the Jimmy Fund Walk with my family multiple times in the last few years, and each time I felt more and more like I could be ready to run it again. When I got the opportunity to do so this year, I didn’t hesitate.”

Blodgett has given herself two goal times — one she’d be happy with, and one as an aspiration. Blodgett is fundraising for Tedy’s Team, an organization dedicated to raising awareness and fighting strokes.

“Running a race like the Boston Marathon gives you a platform, and I knew that if I had the opportunity, I wanted to use that platform to raise awareness about something important and close to my heart,” said Blodgett. “The mission of Tedy’s Team is one that I’m closely aligned with, and I’ve been really grateful to be a part of their team. My mom is my ‘why’, [as] she had a stroke in October and is the embodiment of the Tedy’s Team saying, ‘We Survive, We Run’.”

For Brendan Beauregard ’22 running his first Boston Marathon is about saving his brother’s life. In 2017, his brother Patrick, a corporal in the Marines, was diagnosed with stage four colon cancer, which had spread to his lungs. Patrick has since been through 33 rounds of chemotherapy.

The brothers went on to run a 5K together after Patrick’s diagnosis, but Brendan wanted to go an extra 26.2 miles and run the Boston Marathon for the Cam Neely Foundation, which provides support to cancer patients and their families.

“He’s trying to fight for his life, trying to live on so it’s what I want to do and I just think about that whenever I hit a tough mile or a tough hill,” said Brendan to WBZ-TV.

While that trio of Lions run from Hopkinton to Boylston Street, Alaina Belanger ’16 will be coordinating the 9,700 volunteers for the Boston Athletic Association. Along with one other full-time employee, Belanger directs more than 200 volunteer team captains dispatched across the marathon’s course.

During the year Belanger helps with volunteer recruitment, assignments, recognition for service milestones, and communications. Leading up to race week she is one of a quartet who packs all 9,700 volunteer jackets and organizes credentials. On race weekend, she manages the 1,500 volunteers at the marathon expo. 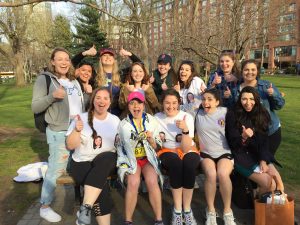 Alaina Belanger, in 2016, with her Kappa Gamma Chi sisters after finishing the Boston Marathon.

Belanger said the Boston Marathon has always held a special place in her heart, as her family would regularly come into Boston to watch the race on the corner of Boylston and Hereford streets. In college, she watched many of her Kappa Gamma Chi sisters run the race, and she also ran it her senior year. This year she’s excited to watch her sister, mom, and friends run the race.

“It is so special to me to work behind the scenes for a race that brings the city together for a day and lets the spirit of Boston shine on a global scale,” said Belanger. ”

One of the many volunteers Belanger is working with is Mike Testa ’80, MSSp ’85, who has been volunteering for the Boston Marathon for 35 years. He previously received a special award in recognition of his 30th year as the Photo Bridge Captain at the finish line.

In his position, Testa coordinates staff that monitors entry and exit for press, VIPs, camera persons and stagehands loading in and out television equipment. They also make sure that all media outlets are in their designated locations on the bridge, check credentials for anyone trying to gain access to the bridge, and Testa said there are a lot people sent away. 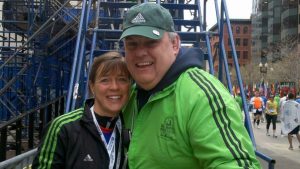 He is also proud of what his team did in 2013, the year of the bombings, and what they accomplish every year.

“My staff and I stayed put on the bridge to help everyone around in need with no fanfare, the way it should be. I enjoy helping people whether they are looking for their friend or spouse who is running, looking for their seat in the bleachers, helping a runner who just crossed the finish line and needs medical assistance, and just congratulating a runner for finishing the grueling 26.2-mile run.”

Testa isn’t much of a long distance runner, although he did play on Emerson’s baseball team and captained the defunct wrestling team, but he does have 35 Boston Marathon jackets at home from every year of volunteering.

“Every year I get to work with many people who I went to Emerson with and I don’t get to see that often,” said Testa. “I have been there for 35 years so the mayors, governors and friends I have worked with [in my previous job as the Director of Special Events for Boston and Massachusetts] stop and say hello. It’s a gathering spot at the press bridge. I really enjoy all the camaraderie.”