The event is intended as a celebration of comedy past, present, and future at Emerson, said Assistant Professor Matt McMahan, assistant director of the Center for Comedic Arts, which is presenting ComEx.

“This year it’s an inward-facing event, but we’re really hoping this is the kind of event that [in the future] comic talents across the country would want to be a part of,” McMahan said. “Our goals are lofty in terms of what this event can become.

“It should be one of the crown jewels of the Emerson College experience.”

Friday evening, April 5, will offer two shows: a selection of material from nine of Emerson’s 11 official comedy troupes, and a smorgasbord of 14 stand-up comics. Saturday, April 6, will feature a sketch revue written for ComEx by students in the first-in-the-nation Comedic Arts BFA program, and the Jess Ilias Clavelli Comedy Competition, an award given annually to a junior or senior comedian.

The festival ends with “ComEx Tonight,” a late-night interview show-style panel (and networking opportunity) featuring Emerson alumni talking about the biz. Alums include Grown-ish writer Hailey Chavez ’15; Eric Drysdale ’93, an Emmy Award-winning writer for The Daily Show, The Colbert Report, The Late Show with Stephen Colbert, and most recently, Full Frontal with Samantha Bee; stand-up comic Val Kappa ’00; The Tonight Show with Jimmy Fallon writer Jon Rineman ’05, who is teaching in the Comedic Arts program this semester; and Stefani Robinson ’14, writer and producer on Atlanta. 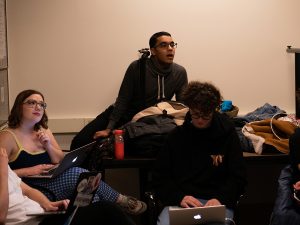 Months ago, when Ratcliff saw the call-out for the festival, he first considered trying for a spot in the lineup. But at the time, he happened to be watching Empire, the FOX drama series about a hip hop industry dynasty.

As it turns out, producing an Emerson comedy festival is less fiery ambition and fur coats, and more, well…

“A lot of producing – you can write this down – is a lot of sitting in a room, watching people,” Ratcliff said. “But people are coming to make us laugh, so it’s definitely not boring.”

Now that the auditions are over, Ratcliff’s job is to direct the Comedic Arts showcase, which consists of a lot of sketches and improv, and some musical numbers.

Ratcliff said he hopes ComEx will put an exclamation point on Emerson’s reputation as a comedy powerhouse.

“I feel like comedy at Emerson has always … been really big and really bright, but having a whole two-day festival saying ‘This is comedy at Emerson’ is really going to put it in the limelight,” he said. “I think it’s a big stage, specifically for the Comedic Arts students, because [the program] is very new.”

But the story of comedy at Emerson is bigger than just the Comedic Arts program. 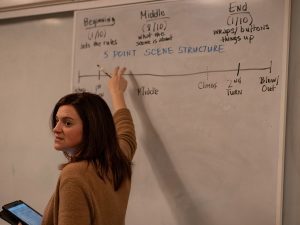 McMahan said one of the benefits of the festival is that Comedic Arts faculty have the opportunity to collaborate with non-majors who are performing in one of Emerson’s many, many … many troupes.

Nearly every college or university has an improv group and maybe some “element of standup,” McMahan said. What makes Emerson stand out is that there are close to a dozen comedy troupes for a student population of roughly 4,500.

“It’s just insane the amount of comedy that’s being produced here,” he said. “And it’s notoriously difficult to get Emersonians to show up to anything, but they’re going to these comedy shows, so it’s not just a culture of creation, but a culture of support and patronage.”

Professor Martie Cook ’82, MFA ’99, founding director of the Center for Comedic Arts, said bringing a comedy festival at Emerson was part of the strategic plan back when she first proposed creating the Center.

As a co-creator of the EVVY awards – the largest student-produced live television show in the country — Cook said she has a great model for developing ComEx.

“I took a big lesson [from the EVVYs] that it’s really important to start small with something that is manageable, that you can get a lot of buzz out of, because that gets people interested, and then grow it over time,” said Cook. “I think that was the smartest thing we did with the EVVYs.”

That’s Schwall’s model for ComEx too.

The improv and comedic acting instructor said she’d like the festival to get to the point where it’s completely run by students, particularly Comedic Arts majors who are studying to write, perform, and produce comedy.

“I would love for this to one day be a three-day long weekend festival where it’s not just our students performing, but also outside professional companies and guest artists coming to perform and maybe run workshops. I’d love to have big honorees every year come and talk to students,” Schwall said.

The Comedic Arts program is very new, and there aren’t any alumni from the major yet, so students and faculty are still working to form a strong identity on campus, Schwall said.

“[ComEx] is something they can be proud of as we build and grow this major.”

For more details about ComEx, visit the festival’s webpage.

A Gathering to Remember Lucas Flint '20