Emerson Works to Shed Light on Screenwriters of Color

Wikipedia, although one of the most widely used online reference sources, often under-represents and omits information about certain groups, but on October 12, Emerson College students and librarians came together to improve entries for one underrepresented topic: screenwriters of color.

As part of Emerson’s third annual Teach-in on Race, the Iwasaki Library put a spotlight on screenwriters of color during a Wiki Edit-a-Thon, where students were given an opportunity to improve and add information about underrepresented screenwriters with the help of librarians.

During the event, students worked quietly but collaboratively with one another, making their way through citation problems and triple-checking links. Cate Schneiderman, outreach coordinator at the Library, guided students through the sourcing process.

Schneiderman’s aim was to combine the messages of a teach-in and a “source-in.”

“We want to make the articles more robust,” Schneiderman said. “Often, students don’t get a chance to showcase this kind of work.” 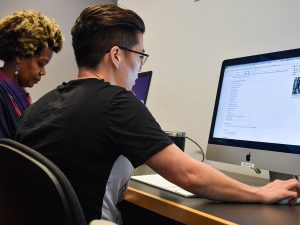 A Wiki Edit-a-Thon participant works on an entry.

She explained that articles containing more quantifiable and relevant information are more likely to be used by the public. More citations for screenwriters of color could increase the likelihood that their work is used and cited in projects and sources.

“Perhaps some of the edits are made to last and be useful to someone,” she said.

Rae Shaw, a new assistant professor of screenwriting at Emerson, led a discussion during the Edit-a-Thon about her own work researching and giving screenwriters of color more online representation.

Shaw is working to develop a database that would preserve the work of writers of color, and would include feature film screenplays. She noted that Wikipedia, although not the “most reliable source,” is very “culturally reflective” of what people are interested in and what people are most curious about.

“We’re trying to give writers of color more of a voice,” Shaw explained. 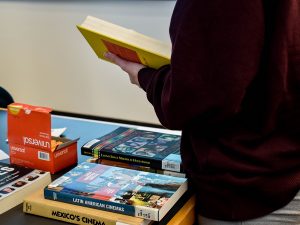 One Visual and Media Arts student in attendance Caroline Keosaksith ’22, said she didn’t know of very many screenwriters of color, which is why she wanted to contribute to the webpage.

“In any situation, [representation] is very important,” Keosaksith noted.

Emerson students and faculty made more than 1,000 edits were made to various Wiki-documents over the course of the event.

Schneiderman hopes that students recognize the importance of citation through the hands-on experience.

“The library is here to be an actor of diversity,” she said.

Time's Running Out to Register to Vote