Emerson’s third annual Teach-in on Race kicked off at the Cutler Majestic Theatre last Friday with a discussion led by scholar, writer, and activist Rachel Kuo, as well as several of Emerson’s most prominent student social justice leaders.

Kuo is a contributing writer for Everyday Feminism and a social justice educator based in New York City. In her keynote, she pointed to the importance of student-led movements for justice.

“Many radical movements have grown from college campuses and have been led by students of color,” she said, mentioning her own background as a student organizer at the University of Missouri.

Today, Kuo is involved in the Asian American Feminist Collective in New York City, and works on social justice issues ranging from feminism to immigrants’ rights.

Kuo emphasized the interconnectedness and relevance of all movements, saying that “attacks on the connected issues of gender equity, justice for poor and working-class people, justice for queer and trans people, and the movement for black lives don’t get left behind at the classroom door.”

Following Kuo’s opening address, four Emerson students at the forefront of the justice movement were invited to join her on stage in a Q&A. The students spoke about each of their respective organizations and the work they are doing to make Emerson a more inclusive campus.

The groups spoke about various approaches to inclusiveness, from fostering a familial atmosphere for South Asian students (DESI), to creating a space for women of color to express themselves through art and performance (Flawless Brown).

The students also spoke to the struggles that can come with being a student of color at Emerson.

“I remember walking into my first class and being the only person of color,” Lia Kim ’21, president of Asian Students for Intercultural Awareness (ASIA), said. “I sat in the front row just so I wouldn’t have to look at the rows upon rows of only white people in front of me. Seeing it would just be a reminder of how othered I felt.” 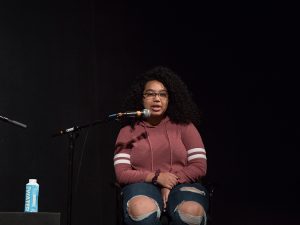 “I found that culture shock is very real,” Solano-Sanchez said. “No matter how much I tried to explain my identities as a person of color to my white peers, there was a part of me that knew they would never understand.”

In the face of this struggle, Solano-Sanchez found herself eliminating parts of her identity in order to fit in. “It’s unfair that I have to wash myself out to get my education,” she said, adding “but I don’t do that anymore.”

Student groups were cited as a great way to connect with other students who might share similar experiences.

Sara Pirzada ’21, president of the South Asian Student Association known as DESI, referred to the organization as “tight-knit family.”

“I could spot a South Asian person on campus, and immediately say to them ‘Hey, you’re brown, you’re already a part of this family,’” remarked Pirzada.

Not only do student groups provide a necessary safe space, but their activism also produces visible change on campus.

“There has been a lot of progress with making sure that people feel included and comfortable,” said EAGLE president Christopher Henderson-West ’20, adding that the administration’s support was crucial in the success of the milestone bathroom initiative.

When one student asked how white students could support the movements, Solano-Sanchez presented a simple solution: “Just show up.”

“At Flawless Brown, all of the art that we create is socially conscious art. It’s about being a woman of color in this space and in this country. So if you come support our art in our element, you might also learn something while you’re there,” said Solano-Sanchez.

All four students on stage agreed that the best way for others to show support was to demonstrate a willingness to learn and contribute, whether that meant coming to a show or even to a group meeting.

“I think there’s a lot of hesitancy from people about coming to a cultural organization if they’re not a part of that culture. I can’t speak for all organizations, but speaking for mine, anyone is welcome,” said Pirzada.

Although this year marked the third annual Teach-In on Race, it was the first time students were brought on stage to offer their perspectives.

Professor Jabari Asim, who has organized the event for the past three years, related to the students’ messages.

“As a student of color years ago, we raised the same complaints across the country at schools like Emerson,” Asim said. “Today, students are still reporting micro-aggressions and race-based problems. It feels like two steps forward and one step back.”

Luckily, students do not have to fight for justice alone. In an era of widespread discrimination, Kim, the ASIA president, pointed out that students are working across different backgrounds and identities to create change.

“We’re all a part of a community of cultural organizations,” she said. “We’re all fighting for diversity and representation. In the end, we all exist together.”

Two Emerson e-Polls: Republicans with Edge in US Senate and Governor Races in Nevada; New Hampshire Races come into focus