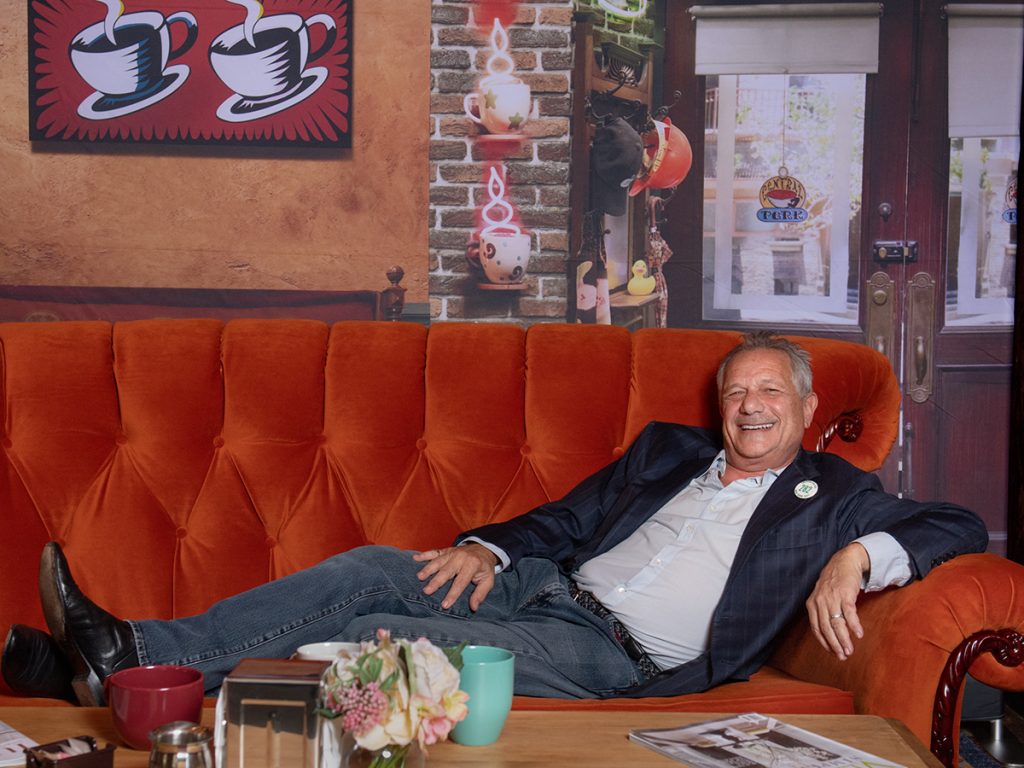 Kevin Bright ’76 celebrates the 25th anniversary of Friends on a replica couch of the TV show’s coffee shop. (Photo taken by Derek Palmer for Emerson College)

The celebration of the beloved sitcom Friends‘ 25th anniversary has been at a fever pitch this month. To commemorate the show, Emerson hosted a replica set of the show’s iconic coffee shop, Central Perk, thanks to alumni Lisa Gregorian ’83, marketing executive at Warner Bros. TV, and Board of Trustees member Kevin Bright ‘76, executive director of Friends.

On Sunday, September 22, Bright visited the Cutler Majestic Theatre to take a seat on the orange couch, talk with students, and field questions about Monica and Chandler’s love, directing the show, and what he thinks the characters would be doing in 2019.

Q: So at what point did you know the show was going to be a smashing success?

Bright: Boy, we knew for sure the second season when during … Actually, during the first season, during the summer reruns is when we knew, because usually your ratings go down in the summer, because everybody who wants to watch you has already watched you. But I guess the buzz had gotten to a point where a lot of people were watching us during the summer [who] had never watched us before, and over the summer we became the number one show in television.

So we just decided to pick the central element of the show and call it, “The One With...”, and that’s the way we always referred to it, anyhow.

Q: You directed 54 episodes, including most season finales and the series finale. Was that something that you were like, “I need to do this. I want to do this.”?

Bright: Well selfishly, as the producer of the show, you kind of have an inside track on what might be the better episodes to direct. So yeah, those episodes, we always tried to have a cliffhanger. We always tried to leave the audience in a place of surprise. And also a lot of times those episodes were larger in size than the other episodes. So I enjoyed doing the big ones.

Q: I’m sure this is a question you get asked all the time, but were Ross and Rachel on a break?

Bright: They were definitely on a break as the way I saw it. But you have to get the answer from 50 people to see if they were really on a break, 25 men and 25 women, and it will forever be a tie.

Q: Were there plot lines you would’ve liked to have expanded?

Bright: I don’t think so. I feel like over the 10 years everything played out exactly for the period of time it should have. I think that we made a very wise decision early on to not put Ross and Rachel together too early. I think that would have really diffused the whole show in a certain way. So no, I think everything we did just lasted as long as it was meant to.

Q: What do you think the Friends are doing 25 years later? Like Monica and Chandler, are they still living in Westchester?

Bright: Oh boy. You want a happy ending for everything, but if you’re going to be realistic from life, there’s no way that happens. So I’m going to say Ross and Rachel didn’t make it. Married 10 years, broke up, two kids. It’s that type of thing where you never know and they just could get back together. But somehow they’ve managed to still stay friends.

Q: What point did you decide Monica and Chandler would be together? Was that from viewer feedback…?

Q: Of all the cameos, and there were lots of famous cameos, were there ones that you really liked the best?

Bright: Well, I liked the cameos that contributed consistently to the fabric of the show. So that’s people like Giovanni Ribisi, that’s Elliot Gould, that’s Christina Pickles. Those were secondary characters on Friends, not just guest shots. So while they were on as guests stars, they really made a big contribution to the show.

Q: Were there any cameos that you wanted to get badly but you weren’t able to get for scheduling or for other reasons? 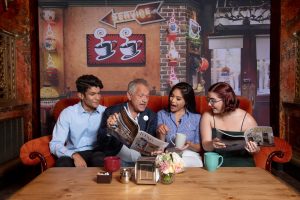 Q: Do you ever have any Friends nightmares?

Bright: Oh, there are many Friends nightmares, but they’re nightmares about production. They’re not nightmares about, I’m in the story room, and I’m observing the six of them doing things. It’s more about, you get to the stage and it’s locked and nobody’s there, those kind of nightmares.

Q: Like you’re back in first grade and you haven’t studied for the test or you wet your pants or something like that kind of?

It didn’t sound like it. They didn’t use the original, master recordings because they were too expensive. And to me, part of six people in their 20s, and doing scenes with them, is people in their 20s listen to music, and they listen to contemporary music and not by the soundalike band. So I feel we used music in wonderful ways in the show, and sometimes it doesn’t get noted as much.

Alumna Elected to Writers Guild of America West's Board of Directors