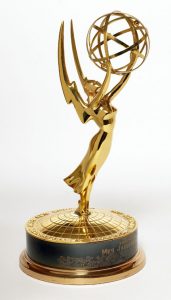 Randy Barbato ’82 took home an Emmy as an executive producer on RuPaul’s Drag Race (VH1), and Raquel D’Apice ’02 was honored for her work as a writer on HBO’s Last Week Tonight with John Oliver.

Barbato also was nominated as an executive producer of RuPaul’s Drag Race: Untucked, which was up for Outstanding Unstructured Reality Program. Barbato has been nominated for a total of nine Primetime Emmy Awards.

D’Apice has been nominated twice, winning both times.

Related: What Do People Do With Their Awards After Winning Them?

Last weekend, a number of Emersonians came up winners at the Creative Arts Emmys, including television legend Norman Lear ’44, who became the oldest person ever to win the statuette for Outstanding Variety Special (Live) as executive producer of Live in Front of a Studio Audience: Norman Lear’s All in the Family and The Jeffersons (ABC).

This was Lear’s fourth Primetime Emmy since 1971, and his 16th nomination.

In addition, David Klotz ’94 won his sixth statuette for Sound Editing for his work on Game of Thrones. Klotz has won twice before as music editor for the HBO juggernaut, as well as twice for his work on Netflix’s Stranger Things and once for American Horror Story: Asylum (FX).

Alumni, School of the Arts, Visual and Media Arts