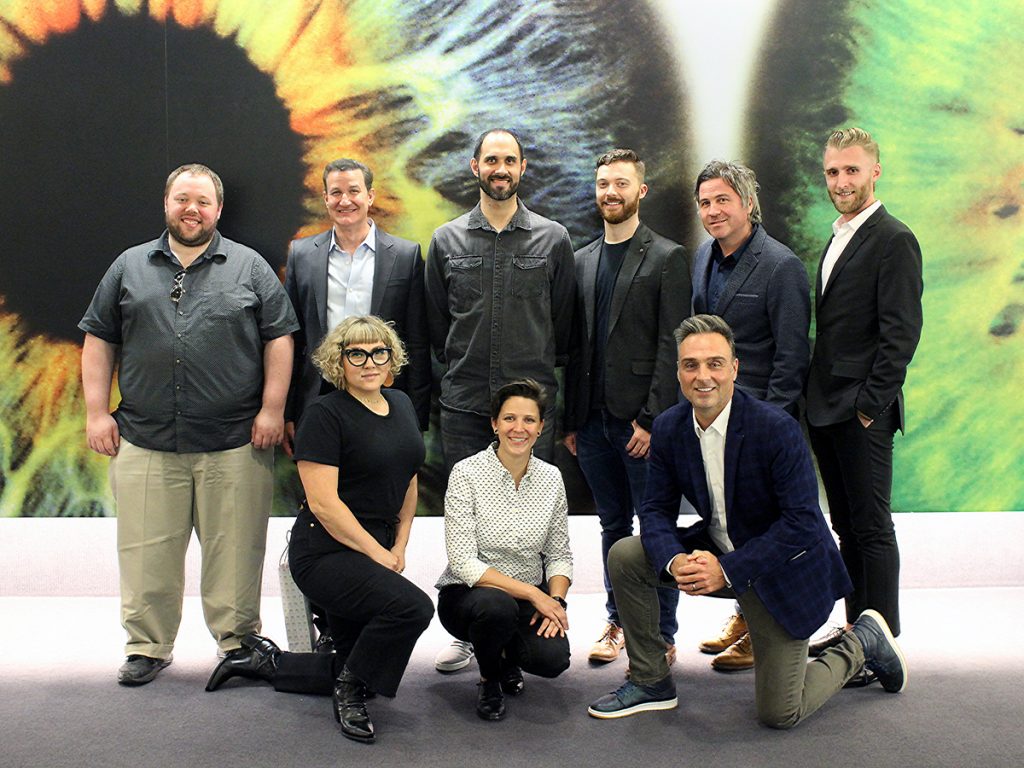 Emerson College students, alumni, and friends celebrated the 20 Emersonians nominated for Emmy Awards this year at the WME Screening Room in Beverly Hills on Thursday, September 12. Nine Emmy-nominated alumni spoke on two panels during the second annual Emerson Emmys Celebration, which was moderated by alumnus and Trustee Doug Herzog ’81.

“I love being part of my music and sound community and feel honored that the shows I work on get recognized,” said David Klotz ’94, a music editor who took home his sixth Emmy at the Creative Arts Emmy Awards this year. “Coming out to LA after graduating was daunting, but having a group of Emersonians with me helped jumpstart my career and it’s incredible to celebrate with everyone.”

Legendary alumnus Norman Lear ’44 also took home an Emmy this year, making him the oldest person ever to win the coveted statuette. Other winners at the Creative Arts Emmys included Ian McGlocklin ’99, who won for outstanding technical direction camerawork for his work on The Late Show Carpool Karaoke Primetime Special 2019, and Jessica Petruccelli ’07, who won for outstanding production design for her work on Russian Doll.

Klotz spoke on a panel with Larry Benjamin ’88, a re-recording mixer nominated for sound mixing for his work on AMC’s Better Call Saul; Danielle Malambri ’11, a visual effects producer at Barnstorm VXF, nominated for outstanding special visual effects for her work on the Amazon series The Man in the High Castle; Steve Miloszewski ’14, an editor nominated for picture editing for an unstructured reality program for A&E’s Born This Way; and Ric Schnupp ’08, a re-recording mixer who won for outstanding sound mixing for his work on National Geographic’s Free Solo. 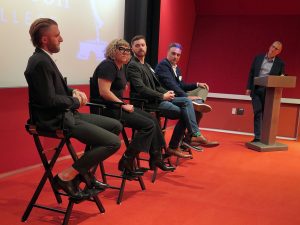 “Everything at Emerson is helpful, even if it doesn’t seem like that right now,” said Malambri. “You think you know your path somewhere and it doesn’t always turn out that way.”

In the audience listening to the panelists speak was Afsara Alvee ’19, a post-production assistant at Sony.

“I’m a recent graduate and when I see all these people with such success it makes me very proud to be part of this community,” said Alvee.

The event not only allowed Emersonians to come together to celebrate this year’s nominees, but it also unveiled special connections. Klotz and Benjamin, who worked together previously on the Fox drama Prison Break, each discovered they were Emerson alumni through the event.

‘It’s a small world, smaller town,” said Benjamin. “Any time I meet someone from Emerson, I’m excited. It’s fun to meet the next group of filmmakers.”

Brittany Martin Porter ’10, a three-time Emmy-winning supervising producer at The Voice, shared a story about how she interned at Comedy Central and had the opportunity to have a one-on-one meeting with Herzog.

“I always knew she would be an Emmy winner,” Herzog joked.

Joining Martin Porter on the second panel was Dicky Eagan ’95, a nominee for writing for a variety special for his work on Carpool Karaoke: When Corden Met McCartney Live from Liverpool; Michael Poisson ’08, a first-time Emmy nominee for his work as a writer on the Adult Swim series Robot Chicken; and Jared Wyso ’11, a producer at The Voice.

Eagan said meeting Paul McCartney was the highlight of working on the Corden special. He told the audience he always loved watching late-night TV, but that he floundered for a while, even getting rejected from sketch comedy groups.

“As soon as I got involved with like-minded people, that was it for me,” said Eagan. “In the morning, I would get up and write jokes.”

Poisson didn’t even know he would be nominated for an Emmy. No one told him that the episode he helped write was submitted for consideration. He found out about his nomination after receiving an email from the show’s boss.

“I feel very lucky to be nominated. To be recognized and talk to fellow Emersonians is exciting,” said Poisson. 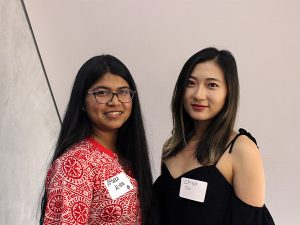 At the end of both panels, Herzog asked alumni to share advice about what they would tell their younger selves.

“Other people’s success is not your failure,” said Miloszewski.

“Be open to where the road takes you,” said Schnupp.

“You might not know what you want to do, but don’t stay inside of something you hate,” said Martin Porter.

“The early jobs you get in the industry are often very thankless,” said Wyso. “Those two years of taking hard jobs pales in comparison to a wonderful 30-year career, so stick through the tough jobs.”

Herzog added his own advice: “If you can see where you want to go, it’s really helpful. That clarity helps you make a lot of decisions.”

Gia Galligani ’98, Emerson LA Alumni Chapter chair, said that she was excited to have packed the WME Screening Room with so many alumni and students.

“I love that we are back at WME for the second year in a row thanks to alumnus (and WME partner and co-head of the agency’s non-scripted television department) Lance Klein ’92,” said Galligani. “And to have Doug Herzog moderate the panels is incredible.”

Owyn Cooper ’19, a market research interviewer, said Malambri’s advice about being okay changing your path struck a chord with her.

“The fact that she said you should feel free to explore your passions was very valuable,” said Cooper. “Emersonians are so passionate about what they do. It’s a great community to be a part of.”

The 71st Primetime Emmy Awards, which honors the best in primetime programming, acting, directing, and writing, will be held Sunday, September 22, where Henry Winkler ’66 is nominated for his second Emmy for Outstanding Supporting Actor in a Comedy Series for his work on HBO’s Barry. Three alumni are up for Outstanding Writing for a Variety Series: Eric Drysdale ’93, for Full Frontal with Samantha Bee (TBS); Raquel D’Apice ’02, for Last Week Tonight with John Oliver (HBO); and Opus Moreschi ’99, for The Late Show with Stephen Colbert (CBS). Moreschi was also nominated in the Outstanding Interactive Program category for The Late Show.