Emerson Alumni Up for Emmys in Multiple Categories 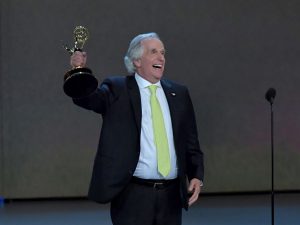 Emerson alumni were well represented among nominees for the 71st Annual Primetime Emmy Awards, announced Tuesday, July 16. Three of the nominees will be looking to repeat 2018 wins during this year’s awards ceremony, which will air Sunday, September 22, on FOX.

Henry Winkler ’67 was once again nominated for Outstanding Supporting Actor in a Comedy Series for his portrayal of acting coach Gene Cousineau in HBO’s Barry. Winkler took home his first Emmy for the role last year.

Three alumni are in contention for Outstanding Writing for a Variety Series: Eric Drysdale ’93, for Full Frontal with Samantha Bee (TBS); Raquel D’Apice ’02, for Last Week Tonight with John Oliver (HBO); and Opus Moreschi ’99, for The Late Show with Stephen Colbert (CBS). Moreschi is also nominated in the Outstanding Interactive Program category for The Late Show.

Other Emerson alumni who were nominated include:

Stephanie Schwam ’92, executive producer of Who Do You Think You Are? (TLC), in Outstanding Structured Reality Program

Marni Senofonte ’94, costume designer, Homecoming: A Film by Beyoncé (Netflix), in Outstanding Costumes for a Variety Program or Special