Joking that he wrote his acceptance speech 43 years ago, Winkler, who was getting his first win after six nominations, recalled something Hollywood attorney Skip Brittenham told him years ago.

“If you sit at the table long enough, the chips come to you,” said Winkler, who was nominated three times between 1976 and 1978 for his role as the Fonz on Happy Days. “And tonight I get to clear the table.” 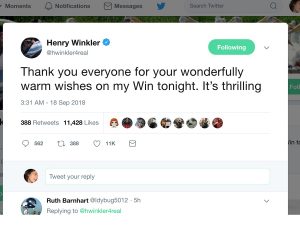 Winkler joins a number of Emerson alumni who went home with statuettes this year.

Kirk J. Miller ’12 won his first Emmy for Outstanding Lighting Design/Lighting Directon for a Variety Special as a lighting director on Jesus Christ Superstar Live in Concert (NBC). The win follows two nominations in the same category: for NBC’s Hairspray Live! in 2017 and The Wiz Live! In 2016.

And in what was perhaps the most emotional moment of the night, an Emerson parent, Glenn WeissP’19, won his second Emmy for directing the Oscars before proposing to his girlfriend, Jan, onstage.

Note: This story may be updated with additional winners.