A few years ago, School of the Arts Dean Rob Sabal and Distinguished Curator-in-Residence Joseph Ketner II worked to get some more art on the walls of the College.

They commissioned artist Julia Csekö to paint a mural based on the text of media philosopher Marshall McLuhan on a wall in the Walker Building, but about year after its installation, the wall had to be torn down in order to build the new Dining Center, and the mural was destroyed.

“Some months later, I went to see Joe in his office,” recalled Sabal. “Leaning against one wall was a 4-foot piece of drywall with some of Julia’s mural.”

Ketner, also the Lois and Henry Foster Chair in Contemporary Art Theory and Practice, is being remembered this week by colleagues and students as an art historian who believed in the power of art to change the world. He died late last week after a battle with cancer.

“He was a remarkable man who lived a remarkable life and who will leave behind a remarkable legacy that will long outlast his days with us,” President Lee Pelton wrote in a message to the community. “He was at once gracious, ethical, unassuming, and humble, but also an inexhaustibly vibrant and intellectually curious person who was ever confident in the transformative power of art.”

Ketner came to Emerson in 2008 from the Milwaukee Museum of Art, where he was chief curator, acquiring pieces by the likes of Sol LeWitt, Nam Jun Paik, and Amy Sillman, and coordinating exhibits by Andy Warhol, Francis Bacon, and Bruce Nauman.

Grafton Nunes was founding dean of the School of the Arts a decade ago, when he tried to lure Ketner away from the museum to come to Emerson. Ketner was “very engaged” in Milwaukee, Nunes said, but eventually decided to take the Emerson job and head back to the Boston area, where he had been the Henry and Lois Foster Director of the Rose Art Museum at Brandeis University from 1998-2005.

Nunes called Ketner a “spectacular person,” with energy and vision, who was able to transmit both his deep knowledge of and passion for modern and contemporary art to his students and the public.

“Joe was truly a force of nature, dogged in his determination to expose Emerson and Boston to the best in contemporary visual art, installing distinctive shows in spaces great and not so great,” Nunes, now president of the Cleveland Institute of Art. “He always agitated to make Emerson a center for contemporary art appreciation in Boston as essential for our students’ and our community’s understanding of how art reflects and affects our collective soul.” 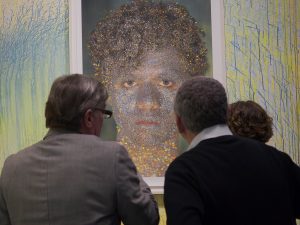 Joe Ketner, left, and others look at a piece from Oliver Herring’s Areas of Action in October 2016. File photo/Sean Jacobson

Professor John Craig Freeman, whose virtual and augmented reality exhibit, Portal to an Alternative Reality: Chinatown Station with Service to Wuhan, was shown in the gallery in November 2017, was on the committee that brought Ketner to the College, and co-founded with him and Professor Cher Knight Emerson’s Public Art Think Tank (PATT).

Before he came, Freeman said, Emerson had several faculty members who were practicing artists, but not a cohesive fine arts vision.

“When he came here, part of the discussion that evolved over time was how Emerson would distinguish itself in the arts, and so what role could we play that was different” from other colleges and universities in Boston, Freeman said.

Ketner, whose background and expertise was in modernist art of the 20th century, decided that Emerson would concentrate on the emerging art of the 21st century: video installation, augmented and virtual reality, and digital arts of all kinds.

His vision was to project that new work out to the city at large – sometimes literally, with installations like last winter’s Uncommon Project, which projected works onto the wrapped façade of the Little Building, or the Paramount Urban Screen, a three-story high LED video projection on the face of 559 Washington Street.

Emerson took a great leap forward in its effort to lead the conversation around contemporary art with the 2016 opening of the Media Art Gallery on Avery Street. Ketner was instrumental in bringing the Media Art Gallery to life, giving the College a street-level, public facing venue for Emerson students and faculty, as well as international multimedia artists such as William Kentridge, Oliver Herring, and Camille Utterback.

This commitment to engaging the public with emerging and provocative art was a huge part of Ketner’s legacy, Freeman said.

“I hope the community and institution can be true to that legacy,” he said. “I, for one, am really going to work to maintain this commitment to art of the 21st century with programs that are outward facing.”

Media arts production major Katie Alfin Johnson ’18 took a class with Ketner last spring. She said she would frequently argue with him about creative interpretation, especially around feminist art.

“[B]ut I think that was intentional on his part and I appreciate that,” Alfin Johnson said. “It helped me challenge my own beliefs and see the world of art from many perspectives beyond my own.

“It’s sad to think the world lost someone so passionate and in love with his work,” she went on, “but the fact that I ever got to meet him and learn from him, however often we argued or challenged one another, means a lot to me.”

Prior to his time at the Rose, Ketner was curator and director of the Washington University Gallery of Art, and curator of the Fort Wayne Museum of Art.

Ketner earned both bachelor’s and master’s degrees from Indiana University, where he wrote his master’s thesis on the African-American artist Robert S. Duncanson, and has since become the preeminent scholar on his work.

Ketner leaves his wife, Patty; son Joseph III, his wife Caitlin, and sons Owen and Julian; and son Alex and his fiancée Emily. In lieu of flowers, donations may be made to the Joseph D. Ketner II Memorial Fund to benefit Emerson Urban Arts.

Information on the Shared Sick Bank Program for Staff

Winkler '67 "Clears the Table" at Emmys, Joins Other Alumni Winners