Kyler Schelling ’13 is the director of the newly released Showtime documentary 100% Julian Edelman, about the New England Patriots star. The movie is the first film from Coast Productions, which was founded by Julian Edelman and Assaf Swissa. 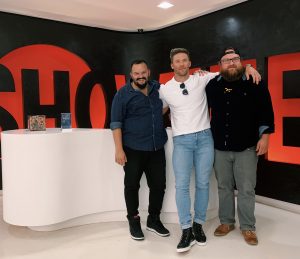 Schelling: We’ve been working for about six years with Julian and started with random off-the-wall viral videos like [the] Smoothie Tymes, Burgertyme. We’ve been doing a lot of creative content for a while. It’s kind of grown. We’ve always had an eye on larger content and narrative projects.

In 2017, we worked with the NFL Network and Coast Productions and followed Danny Amendola and Julian to Mexico City to promote the Patriots’ upcoming game against the Raiders. It was a half-hour special. It was cool, but it was really an NFL Network project. I think they did an amazing job, but there are limitations that exist because of the NFL shield, because it’s a large company.

When Julian tore his knee, we were coming right off that project in 2017, and a lot of people came up to us to do a shoot about Julian’s knee. Me and Assaf [Swissa] said, “Let’s just shoot it ourselves.” We got a camera and camera guy and started rolling footage. Julian was totally onboard on opening the curtain and letting people into his life. It grew with time. It’s a capstone to the crazy short-form videos we’ve been doing. I feel this is the capstone to Julian as a content creator for the last six years.

Q: How did you get in touch with Julian?

Schelling: I was introduced through Swissa, who has an ad agency called /superdigital. I got in touch with /superdigital — honest to god — through craigslist.

I played hockey for Emerson’s club team with Max Collins, and we created Atomic Beard Productions. We had some equipment and no work, and a gig came up on craiglist. It was a lot of work… not a lot of money… basically no money. But me and Max decided to do it. That’s where Assaf and I had our Beatles Hamburg moment, we got into a grind and banged out 100 videos. After that project, Assaf said he was doing Julian’s social media in 2013 and said let’s shoot some short video content. 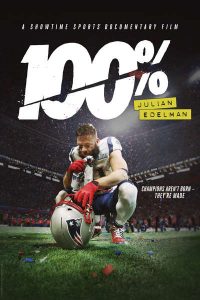 Q: What surprised you about working with Julian Edelman?

Schelling: I would have to say how open he is to testing boundaries and how creative he is, how much he wants to be involved with the process. We came up with crazy ideas to test boundaries and never thought we’d be able to get them through, and Julian said, “Let’s do it.”

In the documentary, we had an early cut for him to review and his notes and insight really elevated the project. Julian is more than just an athlete who wants us to film him. He’s very much a collaborator, creatively.

Q: How long did it take you to make this documentary?

Schelling: We started filming in September of 2017 and wrapped production March of 2019. Post-production happened simultaneously, but we really got into the editing room around end of July and August 2018. We had a final cut in mid-May 2019.

Q: Actor Michael Rapaport, who openly states he can’t stand the Patriots, narrates the documentary. Why is he narrating the film?

Schelling: I think the word narrator is a misnomer for this project. He does provide VO (voiceover) for two scenes, but he’s not present throughout the whole movie. Julian and Rap have a relationship; Jules has been on his podcast, and they both had books out at the same time. They’re friendly. We had this idea for a couple of scenes to be narrated from the prospective of a pissed-off New York fan. And Rap was a perfect fit. I love having him provide commentary on the Patriots’ run to the Super Bowl, I think it adds an interesting wrinkle.

Q: You’ve got commentary from Mark Wahlberg, Snoop Dogg, Tom Brady, and Deion Sanders. What did you think about interviewing them?

Schelling: We feature a lot of celebrities, and not just football guys, but random personalities like Guy Fieri and Snoop Dogg. A lot of these guys have insight into Julian’s story from various angles. It was important to utilize them in fun and creative ways that also serve the story. Julian and Guy are friends, and we thought what would be fascinating is to have him explain an ACL surgery. We wanted to test some boundaries and try to breathe some new life into how you can do a sports documentary. We use [Julian’s] famous friends and do it in different ways.

First we asked Guy, and he said yes. Then we thought, maybe we can ask Mark Wahlberg, and he said yes, and then, well, what about Snoop Dogg, he said yes, everyone started saying yes. So we ran with it, had some fun, hopefully the audience feels the same way. 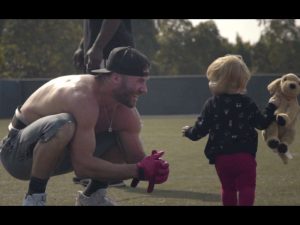 Q: The New England Patriots are known for shunning media. Did you find it hard to gain access to what you wanted for the documentary?

Schelling: No. And here’s why — because we’ve worked with Julian for so long, we understand how the Patriots operate. We’ve always told the story outside of [Gillette] Stadium. It wasn’t even our game plan to tell the story from inside the stadium. We’re telling the story about someone who happens to play football. Not X’s and O’s.

Q: Are you a New England Patriots fan?

Schelling: I am a Patriots fan.

Q: And you must be a subscriber to Showtime to see the documentary? Do you think that will change as time goes on?

Schelling: You can see the doc on all Showtime platforms, VOD, streaming, live. The whole thing.

Showtime really saw what we were doing, and we took risks and did something unique. They knew maybe it wouldn’t work, but they saw our vision and understood what we were trying to do, and Showtime gave us the platform and guidance. I give them a lot of credit for taking a risk with us.

Q: What are you working on now?

Schelling: We’ve got a couple of different projects in the works at various levels. Some scripted, non-scripted, short-form and long-form. It’s too still early to say now. We’ve got some cool things down the pipeline.

Q: How did your Emerson College experience prepare you for your career?

Schelling: I will have to say that my biggest influence from Emerson was my professor, [Senior Director-in-Residence] Robert Patton-Spruill. I had three directing courses with him. He could take the info in the books, about what you’ll hear about in an interview, and he put it in a real place for me. We got to rehearse screen direction with real actors and got to see how it happens, and that film and movie making isn’t just practical things. He gave me a toolbox, and taught me about directing as an actual craft. He came with me and his daughter to the movie when it was premiered. It was important to have him there because he was a big inspiration.

What’s great about Emerson is the mentality across the college to work in the extracurriculars, as well as work in the studio. But really to learn gaffing on your friends’ project, holding sandbags… It’s all these different ways… These projects aren’t going to show up in your transcript, but it shows up in your repertoire as a filmmaker. Emerson really understands it and helps people really understand the project, learning about the project and the craft, and how to make a short film work on $1,000 … when you don’t have the fancy equipment. So when you do have the fancy equipment, you can take advantage of it.

Q: What else would you like people to know about the documentary, yourself or anything else?

Schelling: I would say I’d like people to know about the doc. I would just say, hopefully, it’s something you’ve never seen before. I want people to walk away and be inspired on how to tell sports stories differently and breathe new life into a sports story.

Emerson Alumni Up for Emmys in Multiple Categories