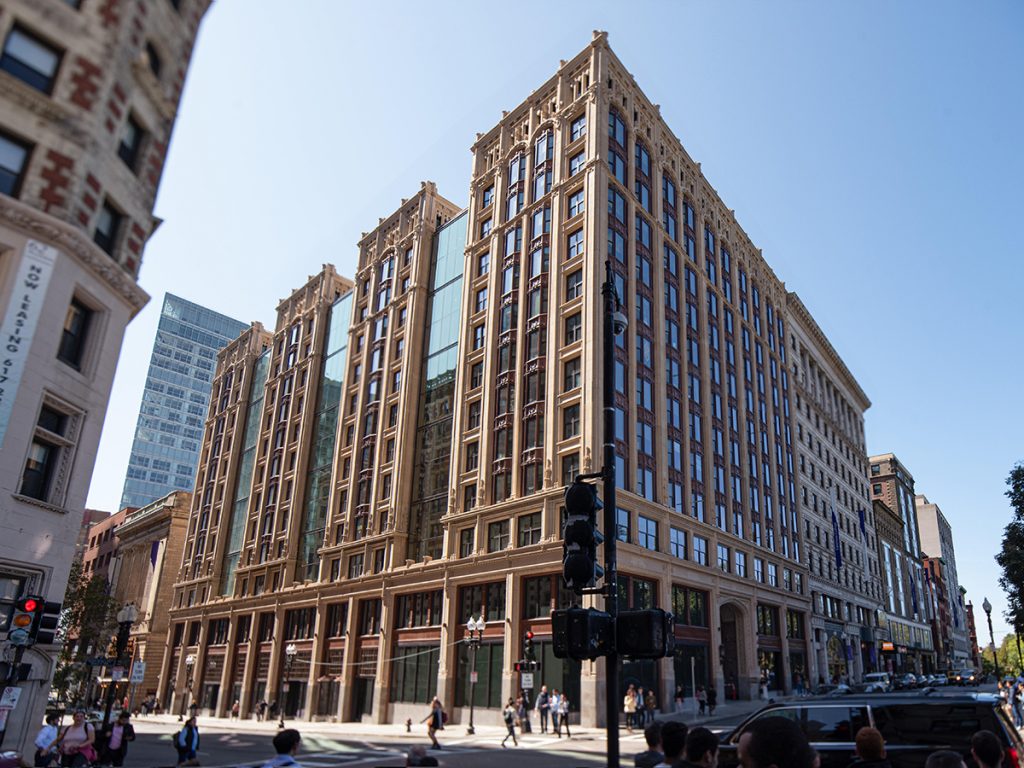 Emerson College did not have to restore the Little Building. The College could’ve easily razed the original structure built in 1917 and erected a brand-new building.

The Little Building wasn’t on a historic building registry, but the reimagining of the Gothic-style structure is akin to Emerson’s previous renovations.

“Emerson College has great pride in the care we have taken to restore and modernize many buildings on the campus — the Cutler Majestic Theatre, Paramount Center, and the Emerson Colonial. Boston’s history is important to us,” President Lee Pelton said. “It was important to the College also to preserve the Little Building’s stunning and historic architecture as we looked to renew the building for student use. We are thrilled the Little Building has opened to students and hope that both Emerson and local community members will enjoy it for many years to come.” 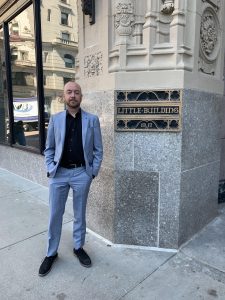 “The goal was to reinvent the Little Building, to give it another 100 years of life, and bring it into this century,” said Ross Cameron, Vice President at Elkus Manfredi Architects. “I say that because it’s much loved by Emerson. We’ve often referred to it as the cornerstone of campus, and architecturally, it’s a beautiful building.”

The Little Building’s facade was failing, so Emerson sought out to not only renovate, but make it even better. After stripping the building down, it was learned the materials up to the third floor could be restored, but much of floors four to 13 needed to be replaced.

Emerson wanted to answer the call of Boston’s mayor for colleges to house more students. By adding a 13th floor and reworking floor layouts, the Little Building went from having 750 beds for students to 1,035, and three resident director apartments.

The most notable change is the new community rooms that now take up what Cameron refers to as the “fingers” of the building, which were empty cavernous spaces on the Tremont Street side of the building. Each floor now has three community room spaces that are two levels high. While those community rooms are more pleasant spaces with natural light, they were also integral to incorporate the necessary seismic bracing.

Seismic bracing typically goes straight down from the top of the building to the foundation, said Cameron. But because there were historical elements of the building that were being preserved, it led the architectural team to realize the end of the “fingers” were the best way to accommodate that bracing, which could go through the community rooms. 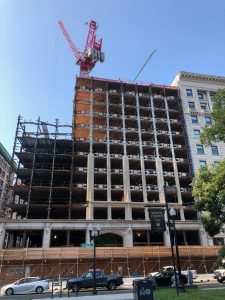 Repurposing the Little Building versus tearing it down limited construction waste, and the renovations provided an opportunity to create some green features.

“We’re harvesting all the rain water that lands on the building and storing it in giant tanks in the basement,” said Cameron. “It’s gray water. It gets filtered and we use it to flush toilets. We’re not using potable water from the city to do that type of thing.”

One of the hardest parts of the renovations was replicating the outside of the building. The entire facade was in bad shape, with the original aggregate of the cast material exposed. That meant the Little Building of 2014 was not what it looked like in 1917. Elkus Manfredi Architects laser scanned the entire building to an accuracy of 1/32nd of inch. That data provided billions of laser points, dots that trace the exact form of the building.

Those dots also picked up all the of the building’s blemishes – every stone out of alignment, every scrap of metal that was used to keep it in place – and those blemishes needed to be corrected.

Elkus teamed up with Autodesk BUILD Space, a research and development workspace located adjacent to Elkus’ Boston offices, to create 3D models. Those models provided the architectural team the ability to communicate to Béton Préfabriqué in Montreal, which created molds to replicate the original building. Then utilizing high-performance concrete, the architecture team was able to replicate the building, including ornate details, like the stone lions that decorate the façade. The new concrete also weighs 50 percent less than the original concrete, which will put less stress on the steel foundation. 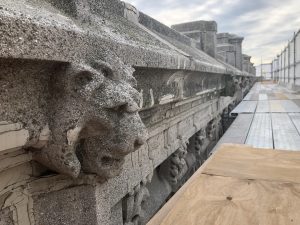 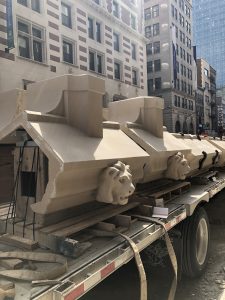 The replica lion features before being erected on the facade of the Little Building. Photo/Elkus Manfredi Architects

And while the Little Building is now abuzz with student life, the renovation is not yet complete. When finished, there will be two cabaret theaters, one with capacity for 154 and the other for 94. There will also be two studio spaces, three rehearsal spaces, a small production space, a green room, and two full dressing rooms.

The ongoing renovations also will include a mix of five or six independent retailers, harkening back to the building’s original life that housed offices, and a shopping arcade at street level, and was a precursor to America’s malls. 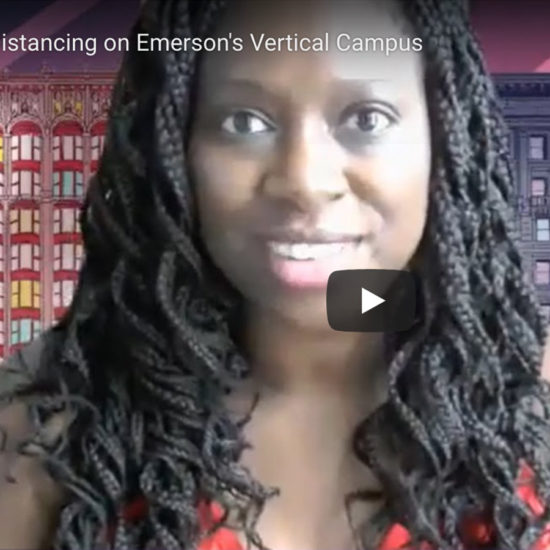 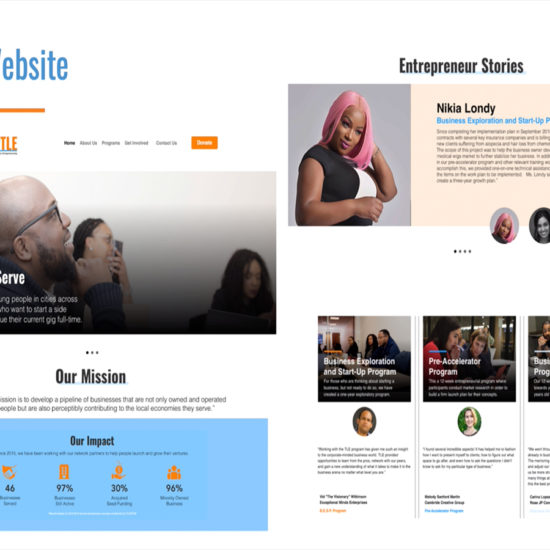 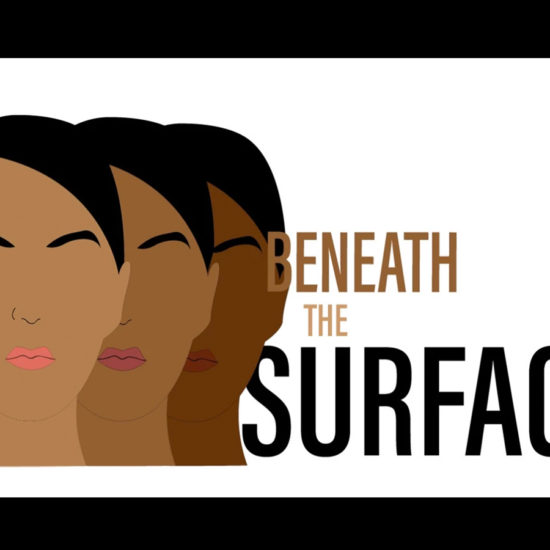