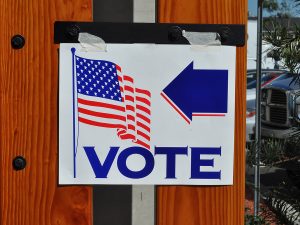 Those figures come from the National Study of Learning, Voting, and Engagement (NSLVE), an initiative of the Jonathan M. Tisch College of Civic Life at Tufts University, released this month. The study collected and analyzed student voter registration and voting rates at more than 1,000 higher education institutions, all of which participated voluntarily.

In 2018, 44.8 percent of Emerson students voted, either absentee or in person on Election Day, and just over 81 percent of eligible students were registered to vote. Emerson’s voting rates were 4 percentage points higher than the average of other private master’s institutions.

Meier and his team have good reason to be “blown away” by Emerson’s 44.8 percent 2018 voting rate. Just four years prior, the College’s voting rate was 11.5 percent, versus a national average of 19.7 percent.

In response to that low number, they launched “Ace the Midterms,” Emerson’s full-throttle drive to get students engaged in the political process.

Working with student organizations such as the Communication; Politics and Law Association (CPLA); residence assistants; and orientation leaders, Meier and company used everything at their disposal to get students registered and voting.

During orientation 2018, whenever students logged into the EmConnect platform, a popup prompted them to register to vote. It gave them information on how to register in their home states (or here in Boston, if they preferred), and allowed them to set reminders to vote or bone up on the issues in their area.

“[You would get] pretty good nonpartisan information about what would be on your specific ballot so you could be educated about what was going on,” Meier said.

Once students registered and had their absentee ballots in hand, they could come to the Campus Life offices where a stack of envelopes and stamps awaited them.

David Fadul ’20, a Political Communication major and CPLA member (now co-president), helped run voter registration tables on campus, which he converted to absentee voting and ballot information stations once the deadlines for registering passed. He also stocked his tables with envelopes and stamps, along with absentee ballots for the 15 most represented states at Emerson. On Election Day, Fadul walked locally registered students to the polls.

“I think the key to getting our generation to vote is to remind us in different ways of the importance of voting and honestly, how easy it is to vote,” Fadul said. “I think a lot of [students] see it as this amorphous, opaque system that, because it is difficult, in their opinion, to move past, they don’t even try. My number one [goal] is explaining how easy it is,” he said.

Journalism major Hannah Lemke ’20 voted in the 2016 presidential election, but 2018 marked the first time she voted in local races. She said a big reason why she did was seeing students such as Fadul, who cared deeply about participating in democracy.

“Knowing that David and some of my other friends are politically passionate drives me to become more politically involved, and therefore holds me accountable in doing so,” said Lemke, who noted that most of her friends voted in 2018.

Fadul and Meier likely got help making their case from the intensely politicized environment in 2018, one that persists today. It’s actually difficult not to pay attention to politics these days, Meier said.

“With instant access, with social media, with … news at our fingertips, it really is just omnipresent. I think it does help create some enthusiasm for participating in that process,” he said.

But even with political passions running high, it’s important to put systems into place that encourage students to translate that excitement into votes. Meier said the College will try to keep the momentum going into and beyond the 2022 midterms with annual registration efforts.

“[Students] have a voice in how this country is governed, how their state is governed, and using that power to enact change … is really, really important,” Meier said.