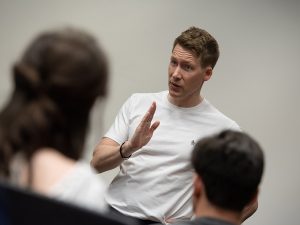 Oscar-winning screenwriter Dustin Lance Black gave students in Emerson’s low-residency MFA in Writing for Film and Television pointers on how he puts a script together, what producers and directors are looking for, and his theory of film as a “culture bomb” this week.

Last year, he won the WGA Valentine Davies Award for his body of work, which includes the screenplays for Virginia (2010), starring Jennifer Connolly and Ed Harris; and J. Edgar (2011), starring Leonardo DiCaprio and directed by Clint Eastwood. He also created When We Rise (2017), the award-winning ABC miniseries about the gay rights movement, and was a staff writer on the Emmy-nominated HBO series Big Love.

Here are some insights Black shared with students during a master class on Tuesday, August 20.

On the length of your screenplay:

“One of the first things they do is look at the page count, and if it’s over 105, it goes right to the bottom [of the pile]. Any movie over two hours has to really earn its keep in a theater because that’s one less film they can screen that day. … [And] a lot of bladders can’t handle it.”

On creating a “guiding principle” for your script and sticking to it:

“If [a scene] doesn’t have something to do with setting that up, complicating it, or fulfilling that idea, it might be a great scene, but it has to go.”

On putting yourself into your work:

“As personal as you make these, and as specific as you make them to what you believe… if it’s yours, then you’re going to be tapping into that very unique voice and there’s nothing more marketable than a new voice.” 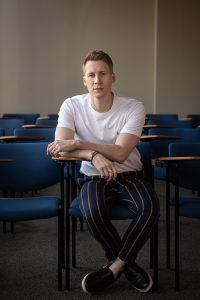 On staying flexible through most of the process:

“I never want to get locked into something because it’s easier to leave it that way. Better to kill those precious babies in this stage.”

On knowing if your script is ready:

“If you’ve got a story that can be told in very few beats … you might have a movie there. I would ask you to examine whether there are enough complications to your character’s main challenge to be interesting. Are there enough turns in it that it’s going to be compelling, surprising, unique?”

On leaving your house:

“Get out in the world. That’s the best advice you can give any writer. Go put yourself in a similar situation as what your characters are going to be in, walk around in it with your eyes and ears open, and I guarantee you’re going to come home with a whole lot of new story.”

“Most of the scripts you write in your lives, even if you’re wildly successful, will never get made. If you have one out of four or 10 produced, you’re like a superstar.”

On possibilities in writing:

“The truth about screenwriting, as opposed to literature, is that it’s an incredibly new language. It’s not even a century old, so we’re still figuring it out. … [When you watch films, think about] how can you borrow from that language and build on it.”

“I’ve never had a director be upset because [I’ve] given them too many clues. … Tell them what to do. That doesn’t mean they’re going to do it, but [often] the director says, ‘O.K. let’s do that.’… You, as writers, can give that, and directors can appreciate that.”

On film as a “culture bomb”:

“Our medium is incredibly powerful, but it has the power to be a little bomb. It kind of breaks things up and creates chaos – and I mean that in a good way – that can change our civilization.”

On screenwriters as clairvoyants:

“We have to tell the future, because unlike a book, or even a play that can be written and produced fairly quickly, movies take a long time to make … Best-case scenario from when you put pen to page, maybe you can do it in three years, but really [it’s likely] three to six years. You have to know the ways in which you’re [going to be] speaking to your fellow man in six years.”

On listening to advice:

“Nothing I say is absolutely true. Nothing that I’m giving you as an example of process do you need to do. I just want to share with you what I’ve figured out works for me.”

“There’s one rule about being a good writer that is true: The way to be a great writer is to keep writing. Write every day. Rewrite.”

Graduate and Professional StudiesSchool of the ArtsVisual and Media Arts

Come on In: Take a Video Tour of the Newly Renovated Little Building