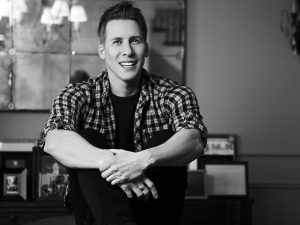 Black, who won an Oscar for Best Original Screenplay for Milk (2008), will conduct a master class and workshop for students in Emerson’s low-residency MFA in Writing for Film and Television program, followed by a public screening and discussion of Milk on Tuesday, August 20, 7:00 pm, in the Bright Family Screening Room.

“The Semel Chair endowment enables the MFA Program in Writing for Film and Television to interact with some of the best writers working in media today. The August 2019 Semel Chair continues this exceptional opportunity for our students,” said Senior Scholar-in-Residence Jim Lane, director of the program.

“Dustin Lance Black has merged his social activism in the LGBTQ world with his love for writing and entertainment,” Lane said. “He has particularly focused on historical figures and events, and then brought them to life for the big and small screen.”

In addition to his Oscar, Black won two Writers Guild of America (WGA) Awards for Milk, the story of gay rights activist-turned-politician Harvey Milk, starring Sean Penn and Josh Brolin. In 2018, Black won the Valentine Davies Award from the WGA for his body of work.

Black also wrote the screenplays for Virginia (2010), starring Jennifer Connolly and Ed Harris; J. Edgar (2011), starring Leonardo DiCaprio and directed by Clint Eastwood; and was the creator of When We Rise (2017), the award-winning ABC miniseries about the gay rights movement. In the 2000s he wrote for the Emmy- and Golden Globe-nominated HBO series Big Love, and wrote the screenplay for Pedro, about Pedro Zamora, the openly gay, HIV-positive cast member of MTV’s The Real World.

He is a founding board member of the American Foundation for Equal Rights (AFER), which successfully sponsored the federal marriage equality cases that challenged discriminatory legislation in California and Virginia. Black also is one of the co-founders of the Uprising of Love Coalition, which works to raise awareness of violence and discrimination against LGBTQ+ people worldwide, and served on the board of LGBTQ+ youth hotline the Trevor Project for three years.

Black wrote 8, a play based on the federal Proposition 8 trial, in 2012. The play, casts of which have included George Clooney, Brad Pitt, Morgan Freeman, Jane Lynch, Martin Sheen, and John Lithgow, has been staged in eight countries and all 50 states, with proceeds benefitting global LGBTQ+ equality efforts.

This spring, Knopf published Mama’s Boy, Black’s memoir of growing up in a conservative Mormon home in Texas. He currently is at work on a limited series adapted from Jon Krakauer’s book Under the Banner of Heaven, as well as a biopic about civil rights organizer Bayard Rustin and a limited series about Charles Lindbergh. He is set to direct The Statistical Probability of Love at First Sight, based on the book by Jennifer E. Smith.

Emerson’s MFA in Writing for Film & Television brings award-winning film and TV writers to its Boston and Los Angeles campuses each year to serve as Semel Chairs.

FacultyGraduate and Professional StudiesSchool of the ArtsVisual and Media Arts