Hip-hop legend Bobbito Garcia with Wes Jackson, Director of Emerson’s Business of Creative Enterprises program, at an April 2, 2019 event that included a screening of Garcia’s most recent documentary and a a Q&A session.

Emerson’s Business of Creative Enterprises program kicked off its Work Speaker Series in April with two events — one with a legendary hip-hopper, and the other with a Spotify executive.

Bobbito Garcia came to Emerson College to screen his documentary Rock Rubber 45’s on April 2. Garcia directed, wrote and produced the doc, which is about the connection of basketball, sneakers, and music lifestyles.

After the screening Garcia did a Q&A with Wes Jackson, Director of the Business of Creative Enterprises program.

Garcia came onto the hip-hop scene in the early 1980s as a member of the Rock Steady Crew. After founding Fondle ‘Em Records, he signed rapper MF DOOM and went on to produce music for artists such as Jay-Z, Biggie Smalls, and Big L. He has also hosted NYC basketball tournaments, done voiceover work EA’s NBA 2K video game series, designed sneakers for Nike, Adidas, and Puma, and has published two books on sneaker culture.

Event attendees included Emerson’s Hip-Hop Society, Converse employees who had heard about the talk through BCE’s Instagram page, as well as Emerson students.

Garcia’s message to Emerson students was that, “…being open to new opportunities is not just good for your career, it’s good for your life.” 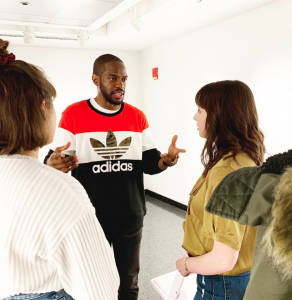 Xavier “X” Jernigan, Head of Cultural Partnerships at Spotify, speaks with Emerson College students at a BCE event on April 9, 2019.

One week later, Xavier “X” Jernigan, Head of Cultural Partnerships at Spotify, sat down with Jackson for a Q&A. During the session Jernigan spoke about his career ascension and his role at Spotify as a playlist curator for global events and cultural significance.

Students asked Jernigan about how he balances work and life, bringing empowerment to others, the power of positivity, and seizing opportunity.

“If there is not a position there that fits the need, create one. One of the best things is writing and creating your own job description,” said Jernigan.

The BCE at Work Speaker Series will return next semester with more industry leaders and creative entrepreneurs. Follow @bce_emerson on Instagram to stay informed about upcoming events hosted by The BCE.