Without any previous trips to forensics competitions prior to joining the team, Emerson’s five-person forensics team won first place in multiple categories in a national tournament while competing against 500 other students.

“Each student started the team with no previous experience; to start a season completely new to the activity and then win a national title is amazing,” said Hawkins to Emerson Today.

Dewji  joined the team to get better at speaking in front of an audience.

“As a [Business of Creative Enterprises] major it’s imperative to be comfortable, to be confident in front of audiences as you pitch a marketing strategy or a new business venture to get people to trust you enough to give you the big bucks to make your dreams a reality. So when the opportunity came up to join the team, I took it to try something new, to force myself out of my comfort zone.” 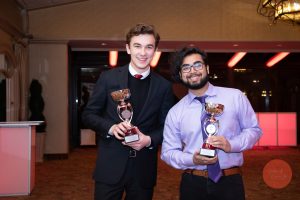 The fearsome five of the forensics team participated in debate and speech individual and team events.

“I like to explain speech/debate like track and field: There are tons of different events, but they all come together for a team award,” said Hawkins. “Students in debate have no control over their side or their topic; the topics range from pop culture issues like ‘Freddie Mercury is better than Elton John,’ to political issues like ‘Beto is the Democrats’ best chance at a 2020 win.'”

Dewji’s favorite topics in competition and practice included: Ocean exploration is more important than space exploration; North Korea is a bigger threat than Saudi Arabia; GMOs do more harm than good; Trump has lost touch with his base; and Thanos had the right idea.

Dewji pivoted from speech to debate in a very short time period before the tourney.

“I spent roughly three to four weeks perfecting my [Program Oral Interpretation]. However, I wanted to do it justice and simply felt I wasn’t going to be ready enough in time for our first competition. So within a week and a half of our first competition, I learned how to debate. I went 2-2 and kept on that same line. …My teammates really helped me in practicing and Deion left no stone unturned to ensure that I was prepping my resolutions the right way.”

Dewji said that outside of competing, the team’s camaraderie is something to be cherished.

“The Emerson team truly reminds of home. I feel 100 percent accepted and can be my truest self when I’m around them,” said Dewji. “Though forensics is a competitive sport, it never feels like there’s competition between each other. There alway 110 percent support, love, laughter, and endless singing.”

But of course, Dewji also loves the competition.

“I think my favorite part of forensics is the adrenaline that pumps through you at the start of any round. I grew up in sports, so there’s a thrill in watching Joey Logano race around the NASCAR track at 190 miles per hour or watching Eli Manning throw that football to [Odell Beckham Jr.] for a one-handed catch to make that winning touchdown, or watching Carmelo Anthony make that buzzer-beating three-pointer,” said Dewji.

For Hawkins, he harkened back to the College’s origins when reflecting upon the team.

“They have excelled the entire year at the regional and national level. Emerson started off as an institution devoted to oratory, these students remind us why that is so important,” said Hawkins.