About a year ago, Sheldon Brown ’14, an actor living in Chicago, was shot while walking home from an L station. What followed were months of slow recovery, an outpouring of support from friends, and Brown’s determination that not only would he continue to live his dream onstage, but that he would use his art to bring out social change.

To honor his commitment to storytelling as a bridge between cultures and perspectives, President Lee Pelton awarded Brown the President’s Award for Creative Courage on Tuesday, April 2.

Brown, a member of About Face Theatre, a company in Chicago that advances LGBTQ+ awareness, understanding, and art, said he was “beyond grateful and thankful” to return to Emerson and see his former teachers and mentors, two of whom — Performing Arts Chair Bob Colby and Senior Distinguished Director in Residence Regge Life — also gave remarks.

“I’m so excited and grateful and blessed to be here, and I hope to continue … motivating and inspiring people the way that I was when I came to this place,” Brown said.

Earlier in the event, Brown talked about seeing, Moonlight, the Oscar-winning coming-of-age film about a young gay black man, for the first time, and recognizing the power of seeing someone who looks like you in a piece of art.

“I’d never seen a story like that on screen,” said Brown, who also stars in the indie film Cicada, premiering in New York later this month, as a man in an interracial gay relationship. “There are so many black and brown kids who do not see themselves on stage and on screen. … I’m very, very excited to make this theatre tell more stories like that.” 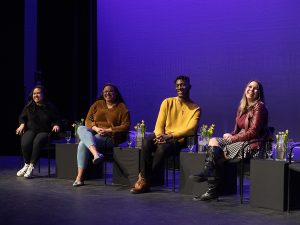 Before receiving his award, Brown sat down with a panel of current Performing Arts students – Dana Chittavong ’21, Davante Jackson ’21, and Angelika Menendez ’20 — who asked him about how Emerson prepared him for a career in theatre, ways people can be an ally to people of color or LGBTQ people, and what he’d like students to take away from his experience and story.

Brown said that while he came out of his ordeal feeling “empowered,” there are forces in this country that want to point fingers at the man who shot him and claim that he’s “inherently violent” and undeserving of opportunity.

“We, as young people, have to mobilize, because we are the future,” Brown told students. “We, as young people, have a voice. We have the ability as artists to steer this country in the right direction. …And as artists we can do that through telling stories, stories that don’t often get told. Changing companies, changing audiences, changing the voices that we have in a room to make productions, changing institutions that have professors and presidents and board members and everything that affects the policies and the learning that we get as young people.