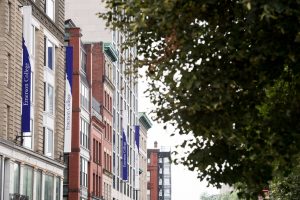 Emerson was one of only 10 journalism programs in the country to be awarded funding through the 2018 Challenge Fund for Journalism Education Innovation – a program of the world’s largest association of digital journalists, the Online News Association (ONA).

The $35,000 grant will enable the College to engage Boston communities with local reporting, and also train local journalists and Emerson students on the use of the Freedom of Information Act (FOIA), which allows individuals to obtain documents and information controlled by the government.

“We couldn’t be happier that Emerson Journalism has been awarded a 2018 ONA Challenge grant,” said School of Communication Dean Raul Reis. “The grant recognizes the excellence of our proposal, as well as the importance of engaging our local communities and training a new generation of investigative journalists.”

The grant will be the beginning of a larger project where journalists and communities will work together through the FOIA process, said Associate Professor Paul Mihailidis, director of the Civic Media: Art and Practice graduate program, who applied for the grant.

“The outcome is going to be a series of reporting and visualizations, and also the transparent process of how FOIA worked,” Mihailidis said.

In Mihailidis’s vision for the grant, journalism and civic media students will use FOIA as an anchor to bring journalists and the community together to figure out how to tell more impactful, immersive, and engaging stories. He said he plans to work with Boston-based nonprofits MuckRock and the Boston Institute for Nonprofit Journalism (BINJ) to offer workshops over the course of the fall semester and make project content available on a newly developed investigative website.

Through FOIA, journalists have the ability to hold public institutions and governments accountable, and gain access to information that was previously classified or inaccessible, Mihailidis said.

Boston Institute for Nonprofit Journalism, among other things, collaborates with partners on sustainable journalism models and civic engagement initiatives. BINJ was founded, in part, to extend opportunities to up-and-coming journalists who might not be able to access college programs.

“Emerson is different in this regard,” Faraone said. “We are excited that [Emerson] actually wants to engage with the city in which the school is located, and we are thrilled to help them do just that with this project.”

Making the process of FOIA more accessible is the mission of MuckRock. Mihailidis, who has been informally collaborating with the organization in and outside of the classroom, said the growing nonprofit is good at helping people file FOIA requests, but is challenged when it comes to getting people engaged with the information that comes from FOIA via storytelling.

“I think we were chosen for this grant because we have a project that is dynamic,” Mihailidis said. “We’re in the heart of Boston, and we’re partnering with two organizations committed to the practice of journalism as a form of justice.

“To recognize Emerson shows that we’re continuing to evolve as a leading journalism school in the country, and this [grant] further solidifies it.”