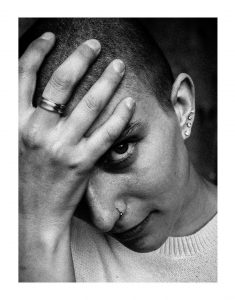 And Hao Zheng ’15, who attended a graduate program at the American Film Institute, was one of three winners in the Narrative (Domestic Schools) category for The Chef.

Patron Saint, which reimagines religion and history as queer deities wearing Jamall Osterholm fashions interact with a mystical landscape, was West’s graduate thesis project. A number of Emerson students worked on the production.

“I am so immensely honored to be recognized by the Academy and extremely proud of my crew – all of whom I met while at Emerson and remain my closest and dearest collaborators,” West, also an affiliated faculty member in the Visual and Media Arts Department, said.

“I am feeling incredibly grateful to have worked with Jamall, who is making groundbreaking designs that elevate bodies and identities with an innovation that inspired and built a world for Patron Saint to exist in. I am excited to showcase queer media that is magical and experimental at the [Student Academy Awards].”

The Student Academy Awards are presented by the Academy of Motion Picture Arts and Sciences, the same body that awards the Oscars. Past winners have included Robert Zemeckis, Cary Fukunaga, Patricia Cardoso, and Spike Lee.

“Taking the risks that are necessary to convey and heighten concepts of underrepresented creatives within the fashion industry is something that makes [Georden] so special,” said Osterholm, a Rhode Island School of Design graduate and former Project Runway contestant. “‘Through [Georden’s] collaboration with myself and many other queer, LGBTQ+ creatives, [their] rise into the highest spaces of excellence is paving way for our community to be recognized and respected.”

Zheng’s The Chef is set in a world where human workers are being replaced by humanoid robots. Pu, a Chinese chef, is ordered to pass along his cooking skills to his humanoid replacement.

“I hope to continue to take risks with my team to create films that explore the intersection of identity and magical realism to evolve experiential interactions between the historically forgotten and contemporarily silenced,” West said.