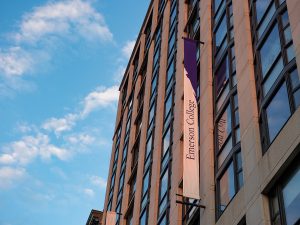 Emerson is once again ranked among the top 10 in the U.S. News & World Report Regional North category, and climbed to #5 in Most Innovative Schools among northern universities.

Emerson tied Ithaca College at #8 in the 2020 U.S. News rankings. This is the fourth consecutive year the College has been in the top 10.

“We are thrilled to once again be recognized for our commitment to making Emerson a leader in global arts, communication, and the liberal arts,” President Lee Pelton said.

Emerson was tied for fifth Most Innovative Schools (Regional University North) with the University of Scranton and Marist College, a list that recognizes those colleges and universities “making the most innovative improvements in terms of curriculum, faculty, students, campus life, technology or facilities,” and tied University of Scranton at #12 for Undergraduate Teaching (Regional University North), a list based on a Spring 2019 survey of top college administrators.

Last month, in its list of “The Top 25 American Film Schools,” the Hollywood Reporter once again ranked Emerson #10. The publication touted the Emerson Los Angeles internship program, the College’s exchange program with FAMU in Prague, as well as its virtual reality lab, audio and postproduction suites, digital production bays, and TV production studios on its Boston campus.

“Boston is small enough to make it on your own, but large enough to learn your independence,” Henry Winkler ’66 told the Hollywood Reporter about his alma mater.

In addition, ranking and college search company College Factual currently ranks Emerson’s Journalism program #1 in the nation. It ranks the College #4 in Radio, Television, and Digital Communication; #7 in Film, Video, and Photographic Arts; and #8 in Communication and Media Studies.

A New Way to Engage