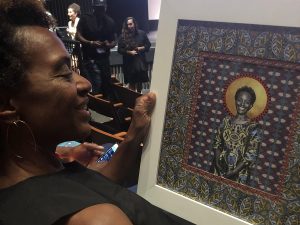 Marcia Smith ’80, founder of documentary production company Firelight Media, was honored with a Luminary Award from the BlackStar Film Festival, a celebration of the visual storytelling of the African diaspora and communities of color, in Philadelphia in early August.

“I think the BlackStar festival is really groundbreaking in that over 11 years, they have cultivated probably the most diverse film fan base of any festival that I’ve seen, and I’ve been to a million festivals,” said Smith, who is president of the media company she founded with her husband, documentarian Stanley Nelson, in 2000.

“They’ve got a really engaged audience, they host really important conversations, and the diversity of their audience is really unparalleled, so it was really an honor for me to get that award from them,” she said.

Firelight’s Tell Them We Are Rising: The Story of Black Colleges and Universities, premiered at the Sundance Film Festival in 2017, and won a Black Reel Award for Outstanding Independent Documentary. The Black Panthers: Vanguard of the Revolution (2015) broke PBS records for broadcast viewership, streaming, and social media; won an NAACP Image Award; and was nominated for an Emmy. In 2021, PBS will air Firelight’s four-part documentary series, Creating the New World: The Transatlantic Slave Trade, as part of Independent Lens, according to the company’s website.

Smith has an Emmy nomination for writing, won the Writers’ Guild Award for best nonfiction writing, and was presented with a Muse Award from New York Women in Film & Television in 2016.

She said both audiences and resources for documentary films have grown in the 20 years since she co-founded Firelight. In 2000, PBS was one of the few outlets screening documentaries, she said.

Smith said she and Nelson initially founded Firelight to “build an infrastructure around documentary film production which is unstable, unpredictable, and since Stanley and I were doing this together, we wanted to try to make this sustainable.”

Today, premium channels like HBO and Showtime, streaming services like Netflix, and even urban cinemas produce or screen a steady flow of documentaries. And increasingly, the stories being told are reflecting a broader and more diverse audience, Smith said.

“There’s definitely progress. The kinds of strides that have been made in the diversity of content is significant,” she said. “I would also say we have seen that kind of progress before, and it can be ephemeral.”

The level of representation in front of the lens is not necessarily indicative of who’s behind the camera. Smith said while there are more people of color directing docs and determining their content, she suspects the diversity isn’t trickling down as much.

“Producer jobs, editor jobs, camera operators, all those kinds of craft jobs – writing jobs – my guess is not as improved [in terms of opportunity] as directors, and directors have a long way to go,” she said.

Smith herself came to her current career “the long way around.”

She said she chose to attend Emerson because the College offered “applied knowledge,” and the ability to learn hands-on skills that would help her throughout her career. Once out of school, she began teaching, then worked in politics. Throughout her career, she encountered the types of stories she would eventually tell as a writer and film producer. After starting Firelight, Smith took detour to serve as senior vice president at The Atlantic Philanthropies, a multi-billion-dollar charitable foundation.

“When I was at Emerson, I was interested in telling stories about dispossessed communities, political issues,” Smith said. “I came around the long way, but I came back around.”

Her advice to current Emerson students who are interested in telling stories via film: Persevere.