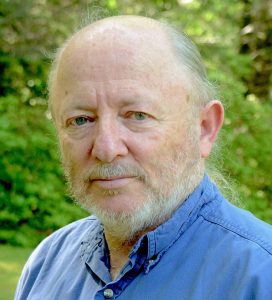 In addition to his five decades making and exhibiting photographs, Akiba also passed along his craft at colleges and schools throughout the Boston area, including at Emerson, where he taught generations of Emersonians from 1992 until his retirement in May 2018. His wife, Jane Akiba, also is a senior affiliated faculty member in the Visual and Media Arts Department.

“He truly loved the medium and was more than happy to share everything he knew about it if you wanted to learn,” said Brian Baldeck ’08, who said he took every class he possibly could with Akiba, including a directed study his senior year.

Baldeck said Akiba was unusually calm and patient when working with students on projects, and had a way of picking out small details in their photos that changed the whole meaning of a shot.

He remembered bringing a “rather moody photo” of Boston Common after a thunderstorm to a class critique. Akiba honed in on a pigeon standing on the path that  cut through the photo, which Baldeck hadn’t even noticed when he made the picture.

“David picked up on the ‘little friend’ in the middle of the path that helped turn the image from a rather dull snapshot into something of a more compelling photograph,” Baldeck recalled.

Baldeck called working with Akiba on a directed study on high-speed photography “truly a gift.” When it came time for his final review, Akiba joked that he may have learned more from Baldeck than vice versa.

“The truth is, I learned so much from David that I still hold close today, there is rarely a time I pick up my camera where I don’t think of something he taught me,” Baldeck said. “David will truly be missed by so many, certainly by me, but I’m so glad I have a lot to remember him for.”

In addition to his work teaching students, Akiba also helped establish the Affiliated Faculty of Emerson College, American Association of University Professors (AFEC-AAUP), something he told Writing, Literature and Publishing senior affiliated faculty member Leslie Brokaw he considered one of his great achievements. A “cool-headed leader” throughout the initial negotiation process, Akiba went on to be the union’s second president.

“David was funny and clear headed and down to earth – in addition to being an amazing photographer – and just one of the world’s really great people,” said Brokaw.

Akiba received an MFA from the Rhode Island School of Design, according to his website. His work is in the collections of the Museum of Fine Arts – Boston, the Library of Congress, Harvard University’s Fogg Art Museum, the Brooklyn Art Museum, the DeCordova Museum in Lincoln, Massachusetts, and the Boston Public Library, in addition to other public and private collections.

Brandeis University’s Rose Art Museum held a retrospective exhibition of his landscape photos, and the Wiggin Gallery of the BPL held an exhibit of his work spanning nearly 30 years, according to the site. A Separate Journey, a show featuring his family photographs, was exhibited at the 92nd Street Y in New York.

Akiba also photographed studio rehearsals, backstage scenes, and performances during the Boston Ballet’s 50th anniversary season, which was exhibited at the Chase Young Gallery in December 2014. He also has published numerous photography books, including Received on Earth, photos of Saturn take from the spacecraft Cassini.

Remembrances may be made to the Trustees of Boston Public Library, c/o President’s Office, 700 Boylston Street, Boston, MA  02116, or www.supportBPL.org; please specify “in honor of David Akiba.”