Jessica Phillips ’94 Back in Boston with ‘Dear Evan Hansen’ 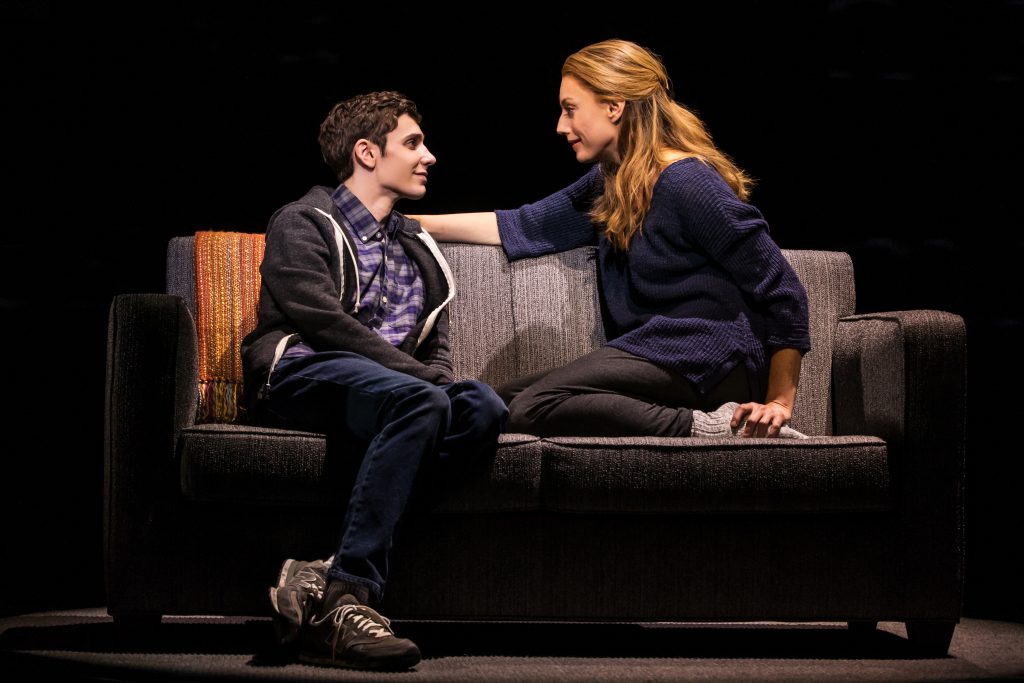 Jessica Phillips graduated from Emerson College in 1994 with a BFA in Musical Theatre, and studied under the tutelage of the revered Leo Nickole. Phillips is starring in the national tour of the Tony and Grammy Award-winning musical Dear Evan Hansen as Heidi Hansen.

The tour is at the Boston Opera House through August 4. While in Boston, Phillips spoke with Emerson Today about the musical, how she was like Evan Hansen in high school, her Emerson experience, and provided advice for those just beginning in the acting profession.

Q: You’re currently starring in the national tour of Dear Evan Hansen as Heidi Hansen. What do you like about the role and the musical?

Phillips: The musical is a spectacular version of real life. The characters are written to reflect real people, who speak like real people, are flawed and make mistakes like real people. And it’s really an incredible standalone score, and if you lift the score out the book it would stand alone as a really beautiful play.

That said, the score is infectious and I think Benj Pasek and Justin Paul, who wrote the lyrics, are geniuses. So is Steven Levenson, who wrote the book. It’s one the greatest pieces of theater I’ve ever been a part of.

I think the character for me is a lot of those same descriptions. This is a woman who doesn’t get it right, but wants to and is trying to, and as a single mother, is struggling to better herself, better her life, and connect to her son in a digital age where all kinds of parenting decisions are in question for all parents. And as a single mom, she is really trying to find her way through raising this teenage boy who struggles with social anxieties in the best way she can possibly do with limited resources and limited access to what’s going on underneath all the drama — the social drama at school. [W]hat I love about playing her, she has this… I don’t like to use the word “journey”… her arc through this story allows her to come to a beautiful resolution with Evan.

[I]t’s not necessarily a happy ending, or resolving the story for everybody, it is just Heidi’s ability to walk into a moment where she finally connects with her son, which has been her goal for the entire story. That she gets to do that, and have this moment of resolution with her son, and connection with her son, is deeply gratifying. 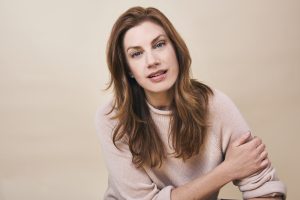 Q: What do you like about doing a national tour? And are you scheduled to be on the tour through its end in September 2020?

Phillips: I won’t be on it indefinitely, but there will be more info coming out.

I love the fans. I love meeting fans in every city and seeing the effect that this show has on people from every state and every socioeconomic class and level of education. I like seeing families at the stage door, and it’s a universal experience no matter where I am. I love seeing the country, experiencing the culture in every little pocket of the United States I’ve been able to sit down for a little bit. I’m trying great restaurants in every city. I’m walking and hiking, seeing landmarks and going to museums. It makes me feel very connected to my fellow Americans. It stabilizes me to get out and meet people and see the country. I ask, ‘Can I live here? Maybe I can live here.’ Just immersing myself has really given me many great opportunities as I’ve travelled.

Q: You’re playing the same character in dozens of performances — how do you keep the character fresh? Do you add little nuances?

Phillips: Every show is different. My job is to tell the truth. And there are obviously some days when I’m more vulnerable, or more tired, or more affected than other days. And I just have to bring what I have to each performance as truthful and honest as I can. The experience of doing something over and over again, it’s really meditative for me because I can’t multitask. I can’t let my mind wander. I really need to be present — at least with this material and the gravity of this material and emotions attached to it. I find it actually satisfying to go through it every night. And the result is it’s a little bit different every day. I don’t try to do that, it’s just me showing up and bringing that particular performance to what I have on that day. 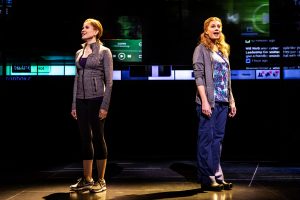 Q: What’s your favorite musical you’ve been in?

Phillips: My favorite musical is always the one I’m doing in that moment because I’m inside of it. It’s this one. Heidi Hansen has become part of my respiration, my heartbeat, and she flows through my veins. And I like it that way.

Q: What’s your favorite musical of all time?

Phillips: Not sure it’s been written yet.

Q: What are some of your favorites?

Phillips: I love Ragtime. Ragtime is only one I haven’t done that I’m really in love with.

Q: If you could play one role, be it in on Broadway, film, or television, what would it be?

Q: What advice would you give to someone who wants to be a Broadway/musical actor?

Phillips: The first thing I’d say is you got to have grit. The process of being in the arts in general is about living with uncertainty, and the lack of any guarantees, or planning for that matter. And being an actress in particular is needing to be available at a moment’s notice to take a job you didn’t know was coming. And frankly, it’s about being prepared to manage rejection, because most of what I do is walk into a room and make myself available for a job I don’t get.

Q: You get rejected a lot?

Phillips: Now I’m in a different stage of my career, but out of 100 auditions I’d get 99 ‘no’s. It’s about managing that and having enough confidence that this wasn’t a match for me. And not taking that ‘no’ to say that you should get out of this line of work.

In general, I tell people a lot there’s just not one path forward to any success in the arts, Broadway, or as an actor. Some people are going to get swept up out of college to star in their first Broadway show. Some people are going to be in their 50s when they get their first Broadway show. Some people start as children and then take 20 years off and come back. There’s no one way to get there and no right way. Trust on working on your craft if you know who you are, and your craft, and have a strong work ethic and you keep showing up, eventually you will find your lane.

Q: How did your Emerson College experience prepare you for your career?

Phillips: I was just having this conversation with Jim Howard (’95), who is also an alum. We both agree that what was magnificent about our Emerson experience is we were forced to engage ourselves or we were left behind. I got a lot out of my academic experience, my many interactions, my professors — but I learned just as much from doing every extracurricular activity I could get my hands on. I did stuff at the radio station, Emerson’s TV station. I did plays, musicals, mini-musicals… I did class projects, I went over to other colleges in the [ProArts] consortium and did plays there and took classes there.

I threw myself in, and those who did that, by and large, came out of Emerson excited and motivated, and prepared to function in the real world. And in the process of that, we formed really terrific relationships with each other. My Emerson colleagues are also out now working in the world, in the arts, and that means there is this really rich alumni community that is part of the support system out in the professional network. 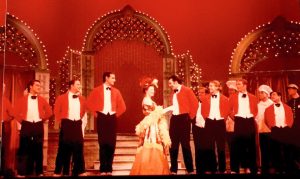 Q: What musicals were you in at Emerson?

Phillips: I was in Hello Dolly, Cabaret, and City of Angels.

Q: Have you done any of those since Emerson?

Phillips: I’ve done several productions of Cabaret. And I keep waiting for City of Angels to come back as a revival, but it hasn’t come back to the United States yet.

Q: So how does it feel to be back in Boston? What have you done or want to do with any spare time?

Phillips: I’ve already been to a Red Sox game. I’ve been eating in all these new restaurants, which are blowing my mind. I ate at Fox & The Knife — I don’t know if I’ve had a better meal. I want to get back to over Beacon Hill because I lived there for three out of my four years. I want to go over to the Charles River and see the Hatch Shell. I want to wander my old beat.

Is The Wall still there? No? That’s too bad. It was a meetup spot. We didn’t have cell phones or email. When you wanted to try to run into somebody, your best guess was you were going to run into them at The Wall. And also remember, campus was kind of spread out. There wasn’t a quad or central location. That was sort of in the middle. My dorm, I was in Charlesgate. So I was all the way over there.

Q: Did you see any hauntings in Charlestgate?

Phillips: No hauntings. Just a raccoon that lived in the middle of the building, in the atrium.

Q: Was it a nice raccoon?

Phillips: (Laughs) Yes, it was nice.

Q: Have you heard of being a muffin?

Phillips: Yes. If you were in the Musical Theatre department you were a “muffin”. Muffin has been carried out into the real world, I hear it in New York. Maybe it was Ellyn Marsh (’00), who single-handedly started it. Non-Musical Theatre kids were called “skulls”.

Q: Is there anything else you’d want to let people know about?

Phillips: I’m happy to be back in Boston. I really had a terrific experience at Emerson. I got a great education and had a really, really good time. And I came out with terrific relationships and it was a really wonderful time in my life. I love being back here and reliving some of that.

And to not be too on the nose about our show — I was like Evan. When I was in high school, I had a lot of social anxiety. I felt very alone. I felt isolated. Theatre was my way of exploring and managing those feelings. Coming to Emerson allowed me to sort of step out of that and into a community of… other sorts of artists and misfits, and I felt like that was the first time I was around people who saw the world like I did, and I found my tribe. And I was able to figure out who I was as a young adult and set myself on a path toward a career that I really fell in love with. Those were good years.