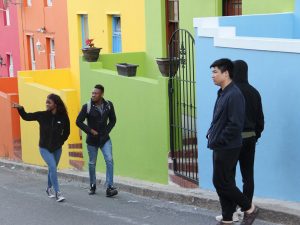 Dessaline Etienne ’20 has collaborated with other screenwriters plenty of times. But for Finding Khaya, the narrative short film he co-wrote with Jo Mbulawa, that collaboration took a little extra effort.

Etienne, a Media Arts Production major at Emerson, and Mbulawa, who studies at AFDA: The School for the Creative Economy in Cape Town, South Africa, would Skype every couple of weeks from 3:00-5:00 pm EST (9:00-11:00 pm in Cape Town), and pass notes and ideas back and forth via Google Docs.

“We did work together from conception all the way to completion,” Etienne said. “We originally started collaborating in late October [2018], and [then] to be in Cape Town wrapping production in early June is sort of mind blowing.”

Finding Khaya was filmed in Cape Town over six weeks earlier this summer. The production itself was a collaboration between Emerson and AFDA students, led by Senior Distinguished Director-in-Residence Regge Life and Associate Professor Harlan Bosmajian, a cinematographer, who co-teach a similar class at Emerson.

“Film production is film production no matter where we are in the world. We knew once the clock started ticking, we had to have a movie,” Life said. “Shooting is done and all of that stuff is in the can, as we say. It’s part of history now.” 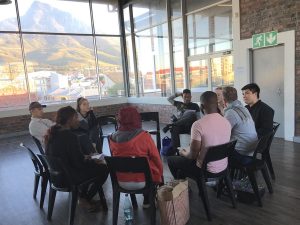 Students do a script read through with Table Mountain in the background. Photo/Harlan Bosmajian

Finding Khaya is about an African American woman, Ana, whose South African husband dies unexpectedly in the U.S. She flies to Cape Town to bury him and attempts to reconnect with his family. In Cape Town, she struggles with her new surroundings, and with a big secret she has been keeping.

For Etienne, it wasn’t just the logistics of collaborating across seven time zones that was challenging. He said his primary concern was maintaining accuracy in the screenplay.

“Even in America, the Black experience is different from family to family, and so things get incredibly interesting when you are shooting a movie based in Cape Town around Cape Town and South African traditionalism,” Etienne said. “It raises questions: How do we do certain things? Does everyone do these things? Are they outdated? What do we not need? What will resonate with audiences? Will people get these themes universally?”

Life said one issue that arose during the film had to do with casting. Finding Khaya was a multigenerational story, and required actors of different ages. Emerson has connections with the Boston area film and theatre communities, so when a student needs an older actor for a project, they can usually find one.

AFDA had no formal connections, something they only realized when they got to Cape Town.

“That was a real uphill battle to find anybody to play the roles,” Life said. 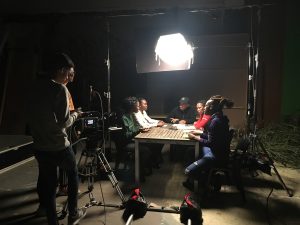 Luckily, Life had met the director of the musical Sarafina years ago, and stayed in touch. He asked the director, who lives in Johannesburg, if he could help out, and later that night, he had the names of 10 local actors, some whom were doing national commercials.

“It’s a much better film because we had these folks with us,” Life said.

McDonald flew to Cape Town believing that acting in film would be much easier than acting on stage.

“I was not able to answer that question fully… because it was just one film, but I do know it was a challenge to stay true,” McDonald said.

In theatre, he said, you rehearse the role over and over before you do it in front of an audience. And once you do perform for others, you feed off the audience, subtly tweaking the performance and discovering new facets of the character. In film, the director says “action,” you do it until he or she feels you got it, and then you’re done. The takes were the rehearsal, he said.

“As an actor, it’s important to learn different styles of acting, and I think it is now forcing me to actually want to do acting for film as a directed study, probably in the fall,” McDonald said. 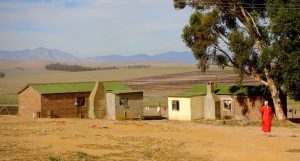 The students and faculty were working all day, most days during the six weeks they were in South Africa. But they did find time to do some sightseeing in the country, including Robben Island off the coast of Cape Town, the penal complex where generations of political prisoners — including future presidents Nelson Mandela, Kgalema Motlanthe, and Jacob Zuma — were incarcerated. They also visited sites in Johannesburg, including the Apartheid Museum, Soweto, and Constitution Hill, site of another notorious prison complex and the current home of South Africa’s Constitutional Court.

Life said he was struck by, on the one hand, all of these reminders of South Africa’s oppressive past, and on the other, its natural splendor.

“You have these touchstones of history, culture, and in many cases, the abomination of what humans can do to each other, juxtaposed against this beautiful city,” he said of Cape Town.

McDonald called the sightseeing portion of the program “visceral and overwhelming.” 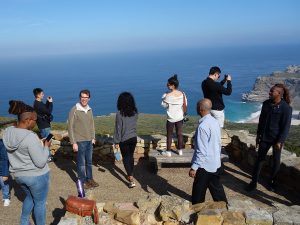 “I was like, ‘Wow, this actually happened,’” he said. “Thousands of lives were lost during this period, and now I am so privileged to be walking around South Africa freely because of what these revolutionaries did to build South Africa to what it is today.”

In mid-June, the Emerson students and the AFDA students sat down in an auditorium in Cape Town and watched Finding Khaya. After six weeks of shooting, they had a good film in the can and strong bonds across the Atlantic.

“All in all, when I think back to the wrap party … great relationships and friendships were formed as a result of this,” Life said.