Emerson Visual and Media Arts Associate Professor Weiko Lin released his first book, Crazy Screenwriting Secrets: How to Capture a Global Audience on July 1 on Amazon and wherever books are sold. From the publisher of Save the Cat!, The Writer’s Journey, and Shot by Shot, Crazy Screenwriting Secrets guides the reader in how to create and develop a screenplay as well as how to navigate the business side of the industry, with an emphasis on creating content that resonates with a global audience.

Why did you want to write this book?

Everyone has a story in them but most feel it’s daunting to do. The hope is this book can be encouraging to potential writers with stories they need to tell. The more points of views in movies, the more accurately they can reflect our world. Some books tend to be theoretical or industry-savvy, loaded with Hollywood lingo. I aimed for this one to lean toward the practical and accessible side.

You take a culinary approach to chapters in the book. Why?

We consume stories by how we eat. The way we eat is how we tell stories. For me, coming from a Taiwanese Chinese family, storytelling was sitting around a table and sharing tales from our day. Wherever you are from in the world, that’s something relatable as a human being. By approaching the book this way, it provides a universal access point. And I love food!

Related: Weiko Lin writes about diversity in Hollywood in The Conversation

Almost everyone I know has a movie idea. Most don’t take it beyond the idea to a story because of fear. When we say “that’s crazy,” it means that’s fearless and out of the norm. If you look at toddlers, they are crazy. They will jump off counters or run into walls and express every emotion at their whim, from laughter to tears. In adulthood, we call that crazy. As we get older, we become much more guarded. We fear consequences of getting hurt emotionally or physically when we do something risky from our heart, whether that’s in a relationship, job, or opportunity.

The idea is that by going back to the crazy, you let go of your hang-ups. It’s really about returning to our inner child, to that curious and bold infant you used to be. Remove that fear. That’s what you have to do as a writer. Because if you’re guarded, you might end up with a cookie-cutter story. 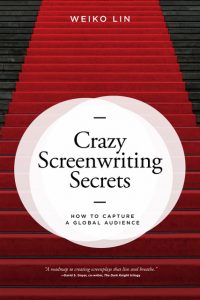 What is one crazy thing you’ve done?

When my mom passed away in the late 2000s, I was working as a professional writer and teaching. I just dropped everything and went to live in Beijing and Taipei for two years to launch my start-up, The Unison Company. Living there was the only way to understand the movie industry and contemporary Chinese audiences firsthand. Mostly, I did it to fulfill a promise I made to my late mother that I would tell Chinese stories and work with Chinese writers to tell theirs. I left every comfort I had. I didn’t know anyone in Beijing when I got there. It was crazy, but worth it.

Explain the second part of the title: How to Capture a Global Audience.

The first part of the book focuses on putting a solid screenplay together. The second half delves into how to create stories that resonate with a global audience, specifically China. No matter what story you’re creating, there’s a global narrative structure, so to speak, that the world is “used to” for a movie. Not necessarily because it’s the best or right structure, but it’s the one that global audiences are used to. For the last 100 years, the American film industry is the significant one that never stopped production. Many countries suffered from war, political unrest, or other calamities. The U.S. has been constantly supplying movies to the world. So, if you want to reach a global audience, no matter what country you’re from or what your specific point of view is, your movie will be more effective by adopting the global narrative structure.

Did anything surprise you while writing the book?

I was caught off-guard by how personal I got, sharing my own loss and infusing my journey into it. I was also able to bring my bicultural identity into it, being someone who grew up in America and also someone who returned to Taiwan and China to reconnect and explore my roots as an adult.

Can you share one example of a movie that you might tweak in a remake to appeal to a global audience, specifically China?

Off the top of my head, let’s take Home Alone. Maybe we’d change it so that it’s a Chinese family in middle America. We’d set the movie during the Autumn Festival (which is like the Chinese Thanksgiving/Christmas) and for whatever reason, the parents are stuck in China leaving their tech-savvy kid home alone to fend for themselves from burglars. It’d have global appeal because this is a cultural fish-out-of-water story. It would also be about the family trying reunite for the holidays.

What’s next for you?

I’m developing a pitch for a dramedy TV series based on a Simon & Schuster memoir I optioned set in the world of addiction and rehab. On the feature side, I’m working on a biopic with a studio producer in process of attaching elements.

LA-area alumni and friends, Weiko will be discussing and signing his book at Barnes & Noble in the Grove on July 25. RSVP here.