What’s the Story Behind the College’s Motto? 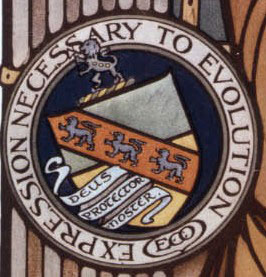 Emerson College has only ever had one motto: Expression Necessary to Evolution. Although it is a short statement, the history and meaning behind it is actually quite complex. The origins of the motto date back to 1878, when founder Charles Wesley Emerson was working as a minister, attending oratory classes at Boston University, participating in the temperance movement, and giving free lectures on various subjects. The stress of these various duties took a toll on his health, and he found himself unable to continue his ministerial and lecturing activities.

After traveling to New Hampshire and the British Isles to cure his “consumption in an incipient stage, and dyspepsia,”[1] in 1879 he obtained a medical degree at the Eclectic Medical College of Pennsylvania. According to several students, friends, and coworkers, Emerson’s training as a minister, orator, and physician led him to create an educational philosophy that encompassed aspects of all three fields. Emerson believed that it was possible for individuals to train themselves physically, mentally, morally, and spiritually to achieve “perfect altruism,” a state in which their lives were focused solely on helping and elevating others.[2] This, to Emerson, was the zenith of humanity’s evolution—in which the mind, body, and soul were perfected.

The question remaining was how to reach this peak of evolution. Emerson believed that the key was studying and perfecting the various methods of expression, as it was through expression that “the attributes of soul are channelled.”[3] Learning proper speaking skills for dramatic, interpersonal, and public activities not only required using one’s intellect to determine the meaning behind one’s words and the best way to portray them, but also developing the emotional awareness necessary to understand the impact and nuances of those words. In that way, according to one of Emerson’s students, “expressional training of the best kind refines the sensibilities, cultivates the beauty of speech, trains the intellect, educates the emotions, broads the sympathies, and gives keen insight into the deeper understanding of life.”[4] 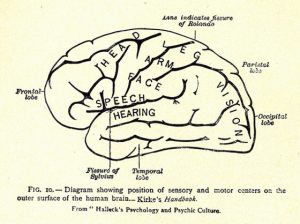 Image of the various centers of the brain and their relation to different types of expression from Charles Wesley Emerson’s Philosophy of Gesture.

Although speech was a key component of an education focusing on expression, Emerson felt it was also very important to focus on physical health and movement. Exercises that focused on building fluid, graceful movements would allow for more perfect expression of ideas, thoughts, and feelings. They would also create a strong, healthy body capable of warding off illness and obeying the commands of the mind and soul.

Emerson’s goal in creating his college was to train students who could implement his educational philosophy. He developed courses—including those titled Oratory, Gesture, Dramatic Interpretation, Physical Culture, and English Literature—that brought all its threads together to demonstrate that proper expression in all its forms was the only way for students to reach their full potential. Therefore, expression was necessary to evolution.