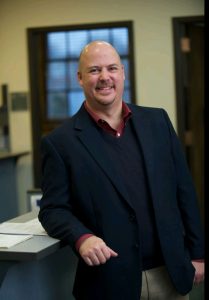 I am excited to announce that John Pestana has accepted the position of Registrar at Emerson College. John will begin at Emerson on July 8, 2019.

Since 2006, John (aka JP) has served as the Assistant Dean & Registrar at Stonehill College, where he co-led the digital transformation of the Academic Division and the implementation of the Ellucian Banner student module. Under his leadership, the Registrar’s Office implemented online course registration and waitlist processes, online grading, implementation of DegreeWorks, a student course scheduling optimizer, a student check-in process, the electronic transcript process, and new transfer policies and processes.

John’s experience also includes chairmanship of the College’s Curriculum Committee, creation of streamlined curriculum development processes, and the development of a digital college catalog. He temporarily led the offices of Academic Services & Advising and the Office of Accessibility Resources during a time of leadership transition and most recently took leadership of the Stonehill Academic Restructuring Team, which proposed and implemented a new school structure at Stonehill.

John is returning to Emerson College as he previously worked for Emerson for 11 years in a variety of positions, including the inaugural Residence Director of the Little Building, Assistant Registrar, Associate Registrar, Acting Registrar, and Associate Director of Professional Studies.

Prior to Emerson, John started his career in Student Affairs and Residence Life at Fitchburg State University. John holds a Bachelors degree from Stonehill College, and an M.A. in Integrated Marketing Communication from Emerson. He also has a culinary certificate from the Cambridge School of Culinary Arts. When not working, John loves to cook and he travels extensively.

I very much look forward to working with JP again.

Emersonians Answer: Why Did You Want to Attend Emerson?