Emerson Graduate student Elisa Hamilton works on her public art project, Drawn Together, which was a collaboration with artist Graham Yeager at the Isabella Stewart Gardner Museum in 2018. (Photo courtesy of Elisa Hamilton)

Emerson College graduate student Elisa Hamilton’s Jukebox public art project was selected from three final proposals by the city of Cambridge, Massachusetts, and will be installed in the renovated-to-be Cambridge Foundry, opening in 2021.

Unlike your typical jukebox that plays music, this Jukebox’s purpose will be to share stories from the Cambridge community.

The Civic Media, Art and Practice major spoke about the upcoming project, jukeboxes, her love for the song “Pulling Mussels (From the Shell),” and why she wanted to attend Emerson.

This interview was edited and condensed. 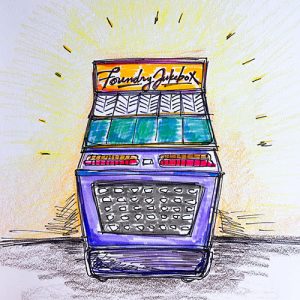 Elisa Hamilton’s Jukebox is a public art project that will debut in Cambridge’s Foundry building in 2021.

Q: Tell us about Jukebox.

Hamilton: Jukebox will be a physical jukebox as well as a live storytelling series. The project encompasses both of those elements. This will be a three-year project, and I’ll begin working on it next month.

Q: What will the project entail?

Hamilton: The project includes the re-imagining of the jukebox itself, a vintage 1960 jukebox, which is going to be converted into a one-of-kind object, part vintage, part computer. The jukebox will have a dedicated space in the lobby of the Foundry. There will also a number of public programs, including the Jukebox live story-sharing series. I’m working with the Loop Lab — a really fantastic organization — to develop the audio content that will be on the jukebox.

Q: Is the jukebox selected at this point?

Hamilton: Yes, it’s at a shop In Lowell. When I started developing this project, I started looking around at where jukeboxes were available to see, and the one that I found in Lowell is the one that really spoke to me.  That will be the physical foundation of the piece. It’s going to be reimagined for this project.

Q: What will go into refurbishing the jukebox?

Hamilton: A number of things, it will be a multifaceted process. I’ve done enough projects to know things change as the project evolves. That’s part of the excitement for me — because sometimes you end up with something even better than you thought you would because things shifted throughout the development of the project. 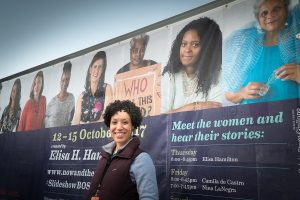 Elisa Hamilton at her art project Slideshow at HubWeek 2017. Photo by Sylvia Stagg-Giuliano

Q: There will be 100 audio tracks from recordings you’re producing in collaboration with the Loop Lab — what will those be?

Q: Have you started recording? What are the recordings of?

Hamilton: No, none of the recordings have been made yet, those will develop as the project does.

So much of this project is about getting feedback from the community and that will directly inform the stories on the jukebox, and the stories that are shared in the live story-sharing series. That’s one of the lovely things about community work: as the artist, I create the creative framework and the vision, but it’s really the community that provides the direction for the content.

Q: Will there be music?

Hamilton: There is so much rich music happening in Cambridge that I definitely anticipate there being music tracks on the jukebox. 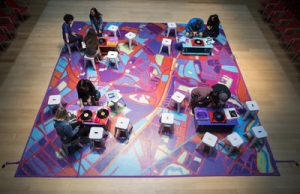 Q: How’d you come up with this idea?

Hamilton: Oh, it was such a long process! It took me a long time to come up with just the right concept for the Foundry. Now it seems so obvious, but there were so many ideas that I scrapped before I got to Jukebox. This project is directly informed by my previous work. [My project] Sound Lab really informed this project. That was a collaboration I did with the Isabella Stewart Gardner Museum in 2017.  I worked with four local community partner organizations over six months, recording the sounds of each organization and leading workshops on close listening. And then I created an interactive Sound Lab at the Gardner Museum that featured the sounds of those community groups on custom vinyl picture discs and allowed museum visitors to come and listen, together, as a community. That project really informed my thinking about Jukebox.

Another specific project that has informed Jukebox is a project called Slideshow, which  I created for Hubweek in October 2017. In that project, I invited 10 Boston area women to each photograph their lives for a week, and then present an analog slideshow about a week in her life in a shipping container at Hubweek. Jukebox is informed by all my work to this point, but by those two projects especially. 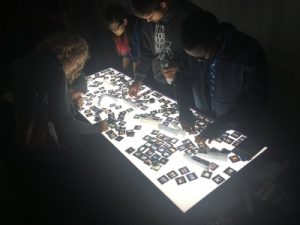 Elisa Hamilton’s Slideshow project was part of Hubweek in 2017, and was a series of curated slide talks and an interactive photo exhibit in and around a shipping container.

I really enjoy analog — for the reason it’s something you can touch and hold. The tactile nature of analog media is really a great entry point to a physical connection to each other. If you can hold something you can touch it and share it with someone else. It’s about building relationships. When the women in Slideshow weren’t presenting in the shipping container, there was an oversized light table of full of the women’s slides where folks could gather around and literally touch and hold these moments. People started piecing together these women’s stories and collecting [for example] all of Tiffany’s moments. [People were asking] Do you see any photos of Tiffany over there?

When I approached the Foundry project, I knew I wanted it to feature community voices in some way, and to have physical elements that were interactive. I had a bunch of ideas and made a lot of drawings. The lightbulb moment happened when I met with the Loop Lab and shared all my ideas with them, and I left that meeting knowing it was a jukebox.

Q: What’s in the jukebox now?

Hamilton: It’s actually empty: it’s a cabinet. It’s in a perfect state to be reimagined.

Q: You’ll be organizing a free public series of live story-sharing events at the Foundry?

Hamilton: Yes, there will be four of those in the first year after the Foundry is open. Those story-sharing series will feature community members sharing their personal narratives, and there will also be opportunities for folks in the audience to gather after the speakers to share their own stories in small groups. Loop Lab will be on site recording and that content will be edited to become audio tracks for Jukebox.

Q: Does it cost money to play the jukebox?

Q: Is this your first foray into working with jukeboxes?

Hamilton: I’ve never worked with jukeboxes before. That was a lot of research that went into every part of the development of this project. Researching jukeboxes was one of them.

Q: Did you use jukeboxes growing up?

Hamilton: Yes, yes, yes. Do you remember those table top jukeboxes? I don’t know where we used to go as a kid, but one particular place had those. I was always delighted by jukeboxes. In my college years, I loved playing the jukebox at Charlie’s Kitchen in Harvard Square. I always played “Pulling Mussels (From the Shell)” by Squeeze. I don’t know what year it was when I went back, but it wasn’t on the jukebox anymore and I was so disappointed. I asked the bartender about it, and she said she was sorry. I think I even wrote to someone, like the manager, and asked them to bring it back. Every time I hear that song, I still think of the jukebox at Charlie’s.

Q: Why did you want to go to Emerson?

Hamilton: I’ve been working as a professional artist for 12 years, and I love the work that I do. I just want to do it the best I can. I felt it was the right time to pursue a master’s. My work has become really community focused. I had considered MFA programs, but when the Civic Media, Art and Practice Master’s presented itself, I felt like it was the right program for me in this moment. It was really attractive to me that it’s a one-year program right in the city. It’s literally a mile from my studio in the South End. I’ve developed my own way of working and my artwork uses many media. I really wanted to expand my toolbox, and make sure I’m really doing the best work I can.

Hamilton: I just feel like this project is a culmination of all of the things I’ve created in the past 12 years. I’m really thrilled to have the opportunity to make Jukebox.

Graduate and Professional StudiesSchool of the ArtsStudents

Lyons on China and the Future of Music Streaming