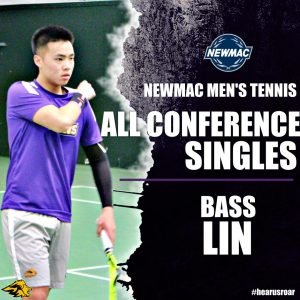 Bass Lin was selected as the NEWMAC Rookie of the Year, and named to the NEWMAC All-Conference Singles Team.

Coach of The Year – Aaron Bergeron; Bergeron led the Lions to a 10-9 record, earning their first NEWMAC victory over the Springfield Pride.

Rookie of The Year – Bass Lin ’22; Lin finished the spring with a 10-3 record in his singles matches, winning three NEWMAC contests, and earning him a spot on the first team.

Singles All-Conference – Maximo Lawlor ’22; Maximo Lawlor earned the final spot for the Lions on the singles side, going 9-3 with four conference wins.

Second Team All-Conference – Jack Fox ’20, Pitcher; The junior finished the season with a 5-4 record and a 3.04 ERA. Fox pitched 68 innings in 12 appearances, striking out 67 batters with one shutout. 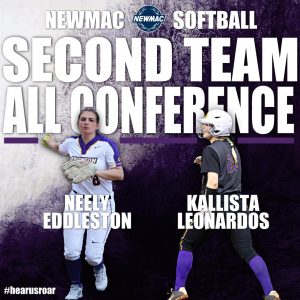 Second Team All-Conference – Neely Eddleston ’21, Pitcher; Eddleston started 24 games for the Lions, finishing with a 13-10 record, striking out 57 batters through 131 innings, and ended with a 3.15 ERA.