Hayley Broderick in the control room prepping for the 38th Annual EVVY Awards.

Being the Emerson College student who directs the school’s award-winning EVVY Awards is a great honor. There can only be one director of the program. This year that honor goes to Visual and Media Arts major Hayley Broderick ’20.

The Mansfield, Massachusetts native answered questions about how someone is chosen to be the director and how she wants to put her personal stamp on the the 38th Annual EVVY Awards on May 10 at the Cutler Majestic Theater.

Q: How did you become the director for the EVVYs?

Broderick: My freshman year I worked on the show. I was on the postproduction team and broadcasting team as a shader. Basically, I was changing aperture, white balancing, throughout the show in the control room. On the postproduction team I edited packages for the show. Last year I was the associate director. I learned a lot from that experience and got to know the show inside and out.

I’ve directed a few (non-EVVY) shows here and there, worked on TV productions, and I felt like this was the next step up for me.

Q: How did you get the job?

Q: How were you selected?

Broderick: It’s an interview process. I submitted my resume. They asked me about my experience with the EVVYs, things I’ve directed before, problems I’ve run into, and then they came to a show that I was directing to see how the production went from the control room. 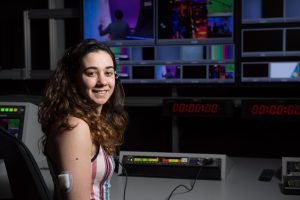 Hayley Broderick ’20 is directing the 38th Annual EVVY Awards on May 10, 2019. Photo by Derek Palmer

Q: What does the job entail?

Broderick: For a broadcast director, it’s definitely different than a screen director. Instead of working with actors and performers, I’m part of the process in creating the show, the elements of the show and ultimately my job comes down to camera work. If you’re sitting in the audience, you’re not seeing what I’m doing. If you’re watching on TV, you’ll see what I’m doing. All the camera work, the planning, and what you’ll be seeing after the show is over. That comes down to my creative vision. I work super closely with the four producers and each of them gets their own element of the show. They create the show, and then I am tasked with getting it remembered for how they want it to be. After the show is over is when people will only get to see how I directed it.

Broderick: Yes, definitely. I go back and watch them from time to time. I haven’t watched all of them because they’re all three hours long. The show is basically one pattern – there’s a performance, then a host bit, then a commercial – it’s learning the elements of the show and learning how they work together. I go back and watch the EVVYs – back to EVVYs 30 is on YouTube.

Last year I worked on the show and was in the control room. I got the director track to listen to how the director was directing throughout the show. Then it’s finding which EVVYs do I enjoy watching the most. And breaking down what makes them most entertaining: Why did they use this camera during the show? Or how did they plan to do this kind of thing?

Q: How do you want to make this EVVY Awards show standout?

Broderick: This year I’ve been working with the producers to involve the audience more, and make it feel like an experience for them. The EVVYs are giving awards to students, but we want it to not just feel like it’s a stage show. We want it to feel like a collaboration with the audience. That’s making sure the camera placement is seeing the audience.

Q: What else have you directed?

Broderick: I’ve directed shows on [Emerson Independent Video], the Emerson Channel, and the National Broadcasting Society. Last semester I directed a big event broadcast of Norman Lear Day. There was this big event for the unveiling of the statue. It was kind of impromptu. It wasn’t in the control room, it was in Center Stage. That was pretty cool and out of my element. One of those elements was that not everything could be planned for, and we had to rolling with the punches and see what happened.

Q: What would you like to do after Emerson College?

Broderick: That’s a great question. I don’t really know. There are a lot of things I enjoy doing I’ve found at Emerson. I’m pretty open to whatever experience comes my way.

One thing in particular is reality competition shows like Big Brother. I really enjoy the challenges they create, and I really like unscripted nonfiction content. You are given what the talents give you, and then you craft a story from the content you have. Creating a story from nothing is super cool.

Broderick: I think it’s a great opportunity to work on something that not many schools can offer otherwise. You work with so many people. It’s about learning, it’s about collaboration and working with different departments. A lot of shows, you show up, you get the script, and you direct the show. With the EVVYs I get to talk to the lighting department, I talk to the producers and ask how does this content create a theme of the show that I want to show? You work with people you don’t always get to work with. It’s a fun process that is great to see. People are putting in 110 percent and it’s such a great feeling once the show is over.

Papernick Set to Mouth Off in Storytelling Championship