Sara Sargent ’19 and Colin McCarthy ’19 perform a stage reading of A Story No One Knows, presented by the BFA Musical Theatre Class.

The canon of musical theater is steeped in works written by white men.

With that in mind, Emerson’s Musical Theatre Program recently performed studio readings of a new musical, A Story No One Knows, by

Hyeyoung Kim and Liana Stillman. The musical is a dark comedy that looks at people in their final moments of life as seen through the eyes of those who come to clean up the mess they leave behind. The musical was influenced by a New York Times article that Kim read several years ago. 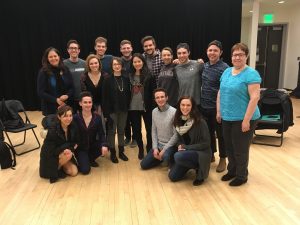 “It’s important to include new voices. Our students coming into the program want to tell new stories,” said Assistant Professor Diane DiCroce. “We have to think about our students who have different life experiences and bring them to the stage.”

Working on a musical that is in the developmental stage also affords students an opportunity that working on, say, West Side Story or The Boys of Syracuse, will not provide.

“It’s important when training young actors to have the knowledge of how musicals are put together, the process and how there are different voices and structures to different musical theater shows,” said Christopher Cavallo, MA ’19, graduate assistant for the Musical Theatre Program. “It’s important because students can learn so much from creating something versus something that’s already been done. We went through additions and rewrites — ‘Alright, add this’ and ‘take this out’ — and [students] learn to be spontaneous to shift the character or the story.”

While DiCroce, Cavallo, and Assistant Professor Sariva Goetz, who was the music director for the reading, corresponded with Kim and Stillman, the students only had about a month to work on the musical without assistance from the creators. The culmination was two readings by DiCroce’s Professional Orientation class attended by Kim and Stillman, which proved invaluable for the musical’s creators.

“Readings are a crucial part of taking a new musical from the page to the stage,” said Stillman. “It’s often not until actors breathe life into your words that you get a sense of what works and what doesn’t.” 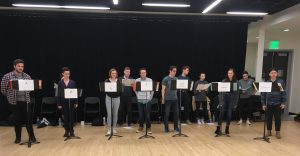 Students read from A Story No One Knows.

DiCroce said students were able to give direct insight and infuse originality into the characters while helping to develop roles.

Students asked Kim and Stillman about characters’ backstories, why certain musical styles were chosen, and why the composer wanted a contemporary rock sound. Among other things, they also suggested stage directions.

The first reading was on a Monday, after which Kim and Stillman took feedback from the students, made alterations, and then the students implemented the changes and performed a second reading two days later.

“We received invaluable feedback throughout the rehearsal process. Diane’s directorial ‘big picture’ thinking influenced the evolution of the show’s dramatic arc, and the expansion of the role of the ensemble,” said Stillman. “Sariva’s musical expertise helped us tighten up the score; and the actors provided a unique insight into every character, helping us hone each voice.”

The readings of A Story No One Knows continue the Musical Theatre Program’s working with musicals in the developmental stages. In 2017, students worked on One Way by Ben Bonnema and Chris Staskel, and Whiskeyland in 2016 by Nik Walker.

“We stress you’re always starting with yourself. It’s always coming from you, in terms of character,” said DiCroce. “It’s about how material is moving through you and how you’re interacting with other people in the scene and on stage.”