Jen Deaderick’s first book is She the People, illustrated by Rita Sapunor (who also drew this headshot).

When it came time for Jen Deaderick ’94 to pick her major at Emerson, she couldn’t decide between writing and acting, so she flipped a coin. Acting won.

The book introduces readers to the women – obscure, famous, and infamous – who have struggled for (and in a few cases, against) equality. At a little over 180 pages, many covered with Sapunor’s evocative images, the book manages to be both richly researched and a quick read. It’s been excerpted in Dame, blurbed by New York Times-bestselling author Rebecca Traister (All the Single Ladies), and congratulated by one Hillary Rodham Clinton. 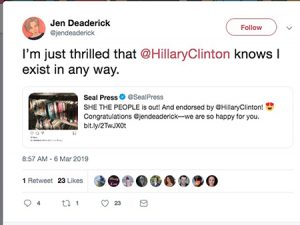 Emerson Today sat down with Deaderick last month to talk about the book. The interview has been edited for length and clarity.

So how did you come to write [an illustrated] history of the women’s movement?

Well, one of the reasons was I wanted there to be a visual representation of the passage of time, so you see these women in different outfits and stuff like that.

But I also just wanted it to be fun. Women’s history is kind of bleak a lot of times. It’s a lot of “And then she wasn’t recognized,” or “She didn’t get any attention for that,” and “Then she wasn’t allowed to.” So I wanted to give it a little bit of fun. [M]y friends who are academics, they could never write a book like this, because this is very smart alecky and very opinionated. And I’m very open about how biased it is.

But there’s something about writing history, you realize how biased all history books are. It’s all about what’s interesting to me. As I do my research, [it’s] “Oh, this is interesting and this connects to this,” but it’s all totally my brain. So having the illustrations is helpful. Rita Sapunor’s the illustrator and … she’s very versatile, so there are different styles of pictures throughout, which is terrific.

I was wondering if you approached the research differently because it’s not a straight history book.

Maybe a little bit, because I did think about pop culture a lot. And there was [a time] early on when I thought even more about a straight-up graphic novel with panels, there were things I thought about in terms of the images themselves. 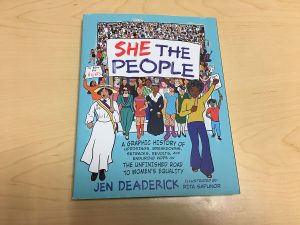 Were there any surprises you uncovered?

I mean, the most fun part for me, because I’m a nerd, was learning about laws. … I hadn’t really known about the colonies. I’d known that there were separate colonies, but I didn’t really know about each colony having its own special agreement with the king and how that reflected later in state laws, which leads to the division over slavery. … And the connections, who was connected to whom was fascinating.

Do you have a favorite feminist now?

Gosh. I guess I’ll have to say [civil rights lawyer] Pauli Murray, definitely. I had to go to Howard University, just to wander the halls of Howard … that was very exciting. And I love her little partnership with … [The Feminine Mystique author]Betty Friedan*. I mean, Betty Friedan is very controversial. She got worried about the lesbians in the movement and that reflecting badly on it, so that got her in a lot of trouble. But I did get to hold her notes in my hands at the Radcliffe Schlesinger Library, and that was really cool.…

For those of us whose mothers were second-wave feminists like mine, it was sometimes difficult because my mom was very worried about me ever embracing anything feminine, because it was a trap to them. A lot of this was also about going back and appreciating and re-enjoying the women who did this in the ‘70s, in the ‘60s, because I had sort of mixed feelings about it. And plus in the ‘80s, we were really encouraged to think of [feminists] as ridiculous women with hairy armpits.

Of course, we accept that more in male historical figures, or in men in general. Like, “Well, he’s difficult because he’s a genius.” With women, it’s just “she’s difficult,” so it discounts everything she’s ever done.

Who did you have in mind for your audience [with this book]?

It was themed in a lot of ways for sort of younger women, who I know are really curious about history now, feminist history. There is this feminist resurgence now which is incredible, I mean, I love that.

Is there anything that you learned at Emerson that you carried into this project or your career in general?

Oh, yeah. I studied theatre, I was an Acting major. And I don’t know, that somehow seems like the best background for everything. I met [Professor and Head of Theatre Studies] Maureen Shea – she taught these great directing classes – and one of the things I learned from her, which I have to say is one of the best lessons I’ve ever gotten, is if you’re directing something, you’re not always going to know exactly what you’re doing. But you have to always look like you know what you’re doing, because the actors need to feel confident.

I think one of the things that I realized in my writing, especially growing up in the ‘70s, you’re just supposed to be expressing yourself all of the time in art, and with theatre, it’s like, no, there’s an audience, and if you’re not connecting to the audience, then you’ve failed. With writing, it’s the same thing.

What I loved about Emerson was that it was just so hands on. I mean, we did art stuff, but it was also very nuts and bolts. And it was so scrappy … I hung lights, I stage managed, I directed, I did all the different stuff, and it was really fun to have all those different elements. And to also get a sense of how it worked, because everyone’s working together, this team.

*Having read Murray’s 1965 paper, “Jane Crow and the Law: Sex Discrimination and Title VII,” in the George Washington Law Review, Friedan contacted Murray about forming an organization that would fight sex discrimination. Eventually, Murray, Friedan, Shirley Chisholm, Anna Arnold Hedgeman, and two dozen others would go on to form the National Organization for Women (NOW).