The Barry star was in the area to do a reading for his latest Hank Zipzer book (co-written with Lin Oliver and illustrated by Scott Garrett), Here’s Hank: Everybody is Somebody, and Lindgren was there to support him.

“Having had such students is one of the joys of being a teacher,” Lindgren wrote on Facebook, “especially when you are remembered.” 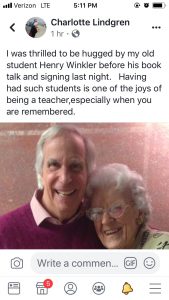 In an undated profile on the Emerson College website, Winkler, who has spoken publicly about his dyslexia, credits Lindgren as one of the people at Emerson who “shifted the course” of his career.

“Charlotte Lindgren, my English professor, was one of the first teachers in my life who understood me and did not judge my learning challenge,” he said.

Winkler, known for playing cool guy Arthur Fonzarelli on Happy Days and inept lawyer Barry Zuckerkorn on Arrested Development among many other roles, won an Emmy last fall for his portrayal of acting coach Gene Cousineau in HBO’s Barry.

But Winkler told the Boston Globe this week that he’s most proud of writing children’s books, because growing up with dyslexia, he never believed he could do it.

Alumni, Faculty, School of the Arts, Writing Literature and Publishing

Emerson Today Catching Up After 52 Years