Visual and Media Arts Professor Kathryn Ramey’s current production, El Signo Vacio (The Empty Sign), a cinematic ethnography interrogating the U.S. occupation of Puerto Rico, was one of just 50 projects selected out of roughly 5,000 for funding and professional support through a Creative Capital grant.

The award includes up to $50,000 in direct funding, plus advisory and career advancement resources and networking opportunities valued at another $50,000.

“It’s a catalyst for growing as an artist and taking your career to the next level, which is why I’m so excited,” Ramey said.

The grant will allow Ramey to travel back to Puerto Rico in the fall to do more filming and production. Nearly everyone associated with the film, apart from Ramey and the occasional technical person, is Puerto Rican. 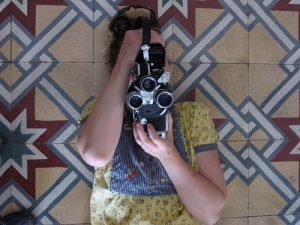 El Signo Vacio uses archival educational, military, and tourism footage that was used to sell the occupation to the American public as a “benevolent gesture,” when in reality America was and is exploiting and extracting resources from the island, Ramey said.

“That’s contrasted by voices on the ground. They’re not directly addressing the media, but actually talking about their own anti-colonialist work, which is actually quite varied,” Ramey said of the artists, activists, climate scientists, politicians, journalists, musicians, farmers, and others she has talked or will talk to.

Since 1898, the U.S. military has used Puerto Rico as a Caribbean base from which to watch over everyone from Spanish colonialists to Cuban communists. A long history of colonial (first Spanish, then American) powers growing food for external markets created an increased reliance of Puerto Rico on food importation, leading to price inflation on the island. Residents of the U.S. territory are federally taxed and eligible for the draft, but have no voting representation in Congress and cannot vote for president.

The fraught and inequitable relationship between the United States and Puerto Rico was thrown into stark relief in September 2017, when the island was devastated by Hurricane Maria, and the federal government’s response was criticized as sluggish and inadequate by people on the island and many in the U.S.

“I think it revealed to more of the world the … just abysmal relationship between the two countries and the absolute radical disrespect our politicians have for them,” Ramey said of the hurricane.

Ramey, who has an MFA in film and a Ph.D. in anthropology, had been thinking about doing something on migration through the Caribbean. Specifically, she was looking at the only American border patrol station outside the contiguous U.S.: Ramey Sector in Aguadilla, Puerto Rico, named for a World War II general and, it turns out, a distant relation to the filmmaker.

“Here is this thing that is literally operating in my name [and] it’s … extending migration and immigration policies of the U.S. government, which are deeply problematic to me, and it’s on land that should be a sovereign country,” Ramey said.

“As I was [investigating] I met all these artists and activists, and I realized this project was much bigger than [the border patrol station].” 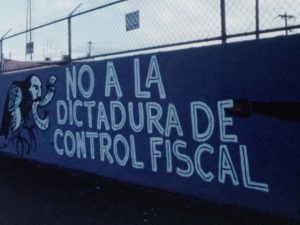 A still from El Signo Vacio

Ramey put the film on hold after Hurricane Maria so she could devote her time and energy to helping her friends and collaborators in Puerto Rico (“No way was I going to make my little movie when the island was a wreck.”).

Now she’s back at it: El Signo Vacio is moving into production. She has trip to Puerto Rico planned in March, over Emerson’s spring break, and a month-long stay coming up in the fall.

The Creative Capital grant will not only help fund travel and production costs, it will pair Ramey with people who can help her find representation, help with branding and promotion, and all the business and marketing aspects of film production that don’t necessarily come easily to an artist.

“That kind of networking, that kind of expertise, you can’t put a dollar value on,” she said.

Emerson alumna Ramona Diaz ’83 also received a Creative Capital grant this year, for her untitled film “explor[ing] fear and the institutions empowered to protect us.” Diaz is the director of the film Motherland, about the world’s busiest maternity ward, as well as documentaries about Imelda Marcos and Arnel Pineda, the Filipino singer/songwriter discovered on YouTube to become Journey’s new lead singer.

Search for a Vice President for Administration and Finance

A Message About the 2019 Super Bowl