Faculty member James Macak poses with a photo with judge Tesha Kondrat ’13 after he received a surprise gift from Boston. Photo/Daryl Paranada

A web series about the aftermath of alien abductions, a comedy pilot about a young mix-raced woman trying to make it in Los Angeles, and a feature-length screenplay about Hollywood actor Nicolas Cage won the top prizes at Emerson College Los Angeles’s fifth annual PitchFest competition, sponsored by Final Draft, on November 8.

Fifteen contestants—seven current students, eight Emerson alumni—pitched their television show, web series, and screenplay concepts to a panel of industry professionals in fewer than 90 seconds. Sean Barclay ’99, a partner at The Gersh Agency; Lourdes Diaz ’93, president of television at AGC Studios; Jesse Harris ’12, a director and writer; and Tesha Kondrat ’13, a writer on Robot Chicken, served as judges for the competition.

Before kicking off the event, Emmy-winner Kondrat moderated a panel on the art of pitching. Judges offered advice to the crowd of 50 on how to pitch ideas in a professional setting. 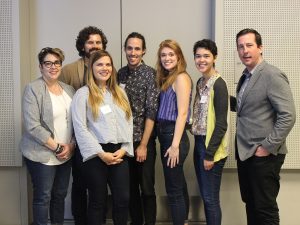 During the competition, contestants took to the mic and received constructive criticism from the judges after delivering their pitches. Alumni and students competed to win the screenwriting software Final Draft and a gift certificate to attend Writers Guild events. Additionally, the audience favorite award was decided by a popular vote among the event’s attendees.

The audience laughed and cheered as their friends and peers presented imaginative, dramatic, and funny television and film concepts. Creative characters dominated the night, from a man who serves simultaneously as a Catholic priest, police officer, and doctor, to an ancient Roman gladiator sucked into a wormhole and brought to a modern-day professional wrestling league.

“It just came from seeing the movie Mandy and thinking more about this guy and who he is and what he’s all about,” Hutchins said.

Atkins and Morse said it was encouraging to receive praise and constructive feedback for their pitches and will continue to develop and write their shows. 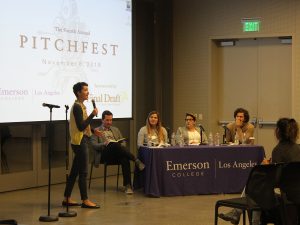 “This year I wasn’t able to guess who our judges would pick as winners or who the audience would choose as audience favorite,” said Macak, who offered coaching sessions to each pitcher before the event. “The sheer number of strong pitches is one of the festival’s major successes, but it’s also a sign that the pitch itself has become its own genre. It’s being taught in more courses and there are more resources available for writers who want to give this a try.”

In recognition of Macak’s dedication to PitchFest, Kondrat announced during the event that the audience favorite award would be renamed in Macak’s honor and presented him with a gift from Boston. The move surprised Macak, who was quick to draw attention back to the true winners of the event: student and alumni pitchers.

“I’m often amazed at how some students and alumni struggle with pitching during their coaching sessions, but then go back to their dorms or homes and really work hard on this activity and turn out some truly amazing pitches,” he said. “The number of pitches that did impress our judges shot up this year.”