“[The National Academy of Television Arts and Sciences ] really loves to support students, especially in this industry, and Emerson is the perfect place to host us,” said Danielle Mannion, a television/film teacher at Millis High School in Massachusetts who serves as national education chair for NATAS, as well as president of the local Boston/New England chapter.

During the event, which was hosted by Dancing with the Stars host Tom Bergeron, about 25 awards were given out in news, craft, and programming categories. More than 200 students were nominated for the competition from the 19 regional chapters of NATAS. This is the second year in a row that Emerson LA has hosted the event, which was live streamed on the NATAS website and its social media channels.

Mannion first approached the College last year about hosting the event in Boston. To accommodate Bergeron’s schedule, she reached out to staff at Emerson LA.

David Michaels, senior vice president of the Daytime Emmy Awards and Events at NATAS, said that one of his favorite parts about working on the event was having students on the crew.

“It’s so great because I get to work with the students who are on camera, sound, lights, and more,” he said. 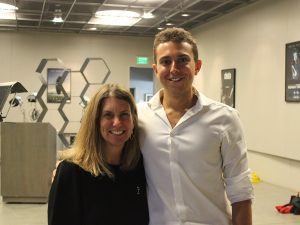 Danielle Mannion, who serves as national education chair for the National Academy of Television Arts and Sciences (NATAS), poses with her former student and Emerson alumnus, Tommy Harkey ’16. Photo/Daryl Paranada

Six Emerson students and alumni worked behind the scenes during the event. Rachael DeSantis ’19, a Visual and Media Arts major, was a camera operator. DeSantis said she enjoyed the experience and was thankful to have been a part of the team.

“It was so cool to work with Tom Bergeron. He’s so talented and hilarious,” said DeSantis. “I love camera operating and finding small gigs like that has been tough for me, so I was lucky Emerson offered me some work.”

Kimberly Perry ’19, a Journalism major, worked as a production assistant.

“To be able to see students in high school who are chasing career paths that all of us at Emerson are here for was inspiring,” she said.

Other Emersonians who served on the crew were Thant Pyone ’19, Caitlin Brown ’19, and alumni Hannah Carpenter ’17 and Tommy Harkey ’16.

“With the crew, you can’t tell whether they’re students or professionals,” said Mannion. “They bring a lot to the table.”

Harkey, a post-production assistant who’s currently writing a film musical, returned to Emerson to volunteer for the event. He said he enjoyed seeing see how excited high school students were about the event. A previous winner of one of the regional awards, Harkey has a special connection with Mannion.

“I never thought I’d be at Emerson College LA with my former high school teacher,” said Harkey, referring to Mannion. “It’s really cool and weird how everything connects.”

Mannion said one of her favorite parts of the event was seeing the reaction of students on social media.

“A lot of our winners are starting to go out and work in the industry,” said Mannion. “The work [students] do gets better and better every year.”