A Visit from Novelist Jennifer Egan

Novelist Jennifer Egan takes questions from Professor Rick Reiken at a Q&A sponsored by Writing, Literature and Publishing and held in the Beard Room on Wednesday, October 24. Egan also gave a reading from her newest novel, Manhattan Beach, later that evening in the Bright Family Screening Room. Photo/Chelsea Dickens, G’19

Jennifer Egan, author of the Pulitzer Prize-winning A Visit from the Goon Squad, The Keep, and Look at Me, among several other novels and short stories, came to Emerson on Wednesday, October 24, to talk about her latest novel, Manhattan Beach, her writing process, and her fascination with absence.

The following is excerpted from a Q&A Egan did, moderated by Writing, Literature and Publishing Professor Rick Reiken and including audience questions.

I think [there are] two key things for me about finding a portal into fiction. One [is] finding a time and a place where I want to be, a kind of longing toward a certain atmosphere. The second thing is writing by hand, which I think sounds weirder and weirder with every book I publish.

My writing process is very blind and intuitive. [It’s] closer to improvisation than to expository writing. I’m looking to get into a groove … I truly don’t know what’s going to happen until it does… When I’m writing a first draft, I will often have a sense of where an action will take place before I know what will happen there.

In that blind phase of writing …. A lot of choices, good and bad, come along, just like with improv. You’ll have dead stretches, but then something really interesting happens.

I type it up, read it over, which is pretty painful … it’s immediately recognizable that a lot of it is terrible … but then there are a couple of things that are really interesting.

[Then] I get very analytical. I make a very detailed outline [and edit on hardcopies]. I basically repeat this process over years until the book starts to get better.

It’s a combination of instinct, analysis, and trial and error. And once an idea seems to be working, I work around that, but I get there very haltingly and mistakes happen all along.

On writing a historical novel vs. writing a novel from personal experience:

What I found with Manhattan Beach was that I had this kind of vague longing [to write about] New York during World War II … When it really came down to writing it, I really felt empty-handed, even though I had been researching it in this desultory way [for years], while I was writing Goon Squad.

I felt like I was the least equipped to write Manhattan Beach of any book I’ve written. What I’ve had to do is acquire a huge amount of knowledge.

There’s Google – we can find out what people smoked and drank and wore, and that takes 10 minutes. That is basically nothing. What it means to live in a particular moment is to bring to that moment your own past… Knowing what we’re wearing and what kinds of bags we’re carrying is nothing. And that was a shock … I felt very stiff as a writer. An analogy is not knowing a language well enough to function in that language.

I felt like what I could do was really limited for a while, but eventually a kind of synthesis began to emerge. But that took a while. 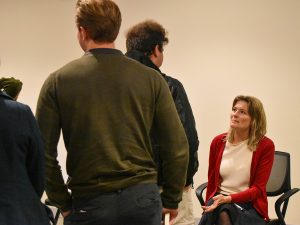 Fans line up to get books signed by Jennifer Egan. Photo/Chelsea Dickens, G’19

On writing as an escape from the mundane:

What drew me to writing more than anything else is this sense of transcendence I have … a sense of being pulled out of my life or having the option of living another life.

I also think that I’m not often especially drawn to writing about people who are like me for exactly the same reason I like the feeling of escape or delivery out of everyday life.

When I write about someone who is like me, a kind of dead feeling comes over me.

On absence as a theme in her work:

I’m really fascinated by absence and its power. … It feels more philosophical and it feels related to technology as well. I’m always struck, even in the most basic way, by the way someone or something that’s not present can exert as strong or a stronger pull than something actually there.

It explains so many things about image culture and why it works. Like advertising. It results in a kind of yearning that is very useful to people and institutions.

On making decisions about tense, point of view, structure, etc.

When all is said and done, I have usually weighed every decision down to the word. I should know exactly why every single move I make is made. In order to have a sound story structure, there should be a story told on every single level structurally, starting with the sentence.

At a certain point, with longer books, I’ll take every moment in which a character appears … and string all of that out as one single document and just read that. Because every single time that person appears or says a word, our knowledge of that person should be advanced in some way.

On self-criticism and reading the manuscript for The Keep for the first time:

As soon as I’m in problem-solving mode I feel much happier. … The worst phase of all is the typing, and then the reading of what I’ve typed.

I went away for two nights to read [The Keep]. … I was so appalled by its poor quality, I basically had a panic attack and came home. … I didn’t want to be alone with this manuscript. I mean, it was frightening.

I know it does get better once I’m fixing, rather than discovering what needs to be fixed.

In the case of PowerPoint, I was interested in working in PowerPoint before I knew wat PowerPoint was, to be honest. I had tried things that didn’t work, like epic poetry… I kept thinking PowerPoint, PowerPoint. I wrote to a few friends I have in the corporate world and said, ‘Can you send me a few PowerPoints?’ When I discovered what they were, I felt excited because I liked the names of some of these charts… and I thought ‘Wow, this is storytelling! I can do something with this.’

With Twitter, I was very excited about the kind of inadvertent poetry of it, especially when it was still [140] characters.

The 2018 World Series and its potential impact on campus