This is an edited version of a conversation with Leonie Bradbury, Henry and Lois Foster Chair of Contemporary Art Theory and Practice; and Distinguished Curator-in-Residence, Emerson Contemporary.

Q: How does one lead an art gallery during a pandemic?

I think the biggest thing is to be adaptive. As things are changing, it’s trying to respond as best as possible. And being very flexible in scheduling. We’ve gone from having things on the schedule to having them shut down, then having nothing on the schedule, and then suddenly being allowed to be open. There’s a certain level of adaptability and flexibility to respond to the movement, and when opportunities arise to jump on them to showcase art.

We shut down March 15, and we had an exhibit just closing, so the timing was good. Two weeks later, our next exhibit could not open. That was created by students in the Curating Contemporary Art class. The gallery went dark. [The class is] a crash course in curating, and then we make an exhibit together, and they are the curators and execute all tasks of curating an exhibit.

The Center for the Holographic Arts reached out to us [to ask] if we wanted to participate in the Sending Light exhibition. We thought, what an amazing opportunity… we have a lot of projection equipment. We put screens in our windows [at the Avery Street gallery] and did a call for work from Emerson College alumni and faculty to submit art to us.

Then, at that point everything was uncertain. When that exhibit was over, and there was no way to open soon, we started thinking about curating for that space if the gallery can only be on its [facade] to continue to amplify artists’ work.

In Between Palms from Emerson Contemporary on Vimeo.

The next student art exhibit was an incredible photo series, In Between Palms, by Baolong Song, which started as a studio portrait series. He took it out to the street instead of inside and started taking photos of people he didn’t know in the city. The emphasis was really on a shared humanity, which was something the world was in short supply of. This exhibit exemplifies [the shared humanity experience]. That exhibit was for a month.

In August, was Allison Maria Rodriguez’s Dreamy exhibit. It’s surrealist art of people’s dreams when they were children.

The gallery was supposed to be used as a classroom in the fall because of de-densification, but it is not. A week before classes started the gallery was okayed to be open. We showcased the student show Art for Tomorrow that couldn’t be exhibited in the spring. That exhibit in itself is a perfect metaphor for the whole COVID experience. It was cancelled. Then they decided to do a virtual exhibit. During the summer, the gallery went dormant, then when we could be opened, it was opened. It’s good to still create a physical exhibit that the students designed.

Q: Since being hired June 2019, how have you adapted teaching?

Bradbury: All of our classes went online. This is challenging in itself. We were just switching to the practicum part of the class. Hands-on had to become virtual as well. But by creating virtual gallery space, students could still have as much experience as possible in creating a show and know the relationships [of creating a show]. We also made a website for that show. It had a really positive outcome, and we created something everyone was really proud of.

We were one of the first spaces in the greater Boston area who put up a virtual exhibition, and then others started doing them. That speaks to the talent of our students to be make something like that as part of our class.

This fall I’m teaching the same class. The current show, Digital Dreams, is student curated. They had to design it. We had a call for work from emerging Boston artists. We did an initial review and then went into the gallery with various themes and tried to hash it out with nine students for one conception, and what would support that concept the best. It opened November 11 and runs through December 11.

Q: Why was the name of the gallery changed to Emerson Contemporary?

Bradbury: It became official in January. [It was changed for] a couple of reasons. We wanted to create an umbrella term for all these different parts of the job.

As a new person [at Emerson College] it took me a while to understand all the things [Emerson Contemporary leads]. I wanted to create a name for the venues. The previous name had the word arts in it twice, so we changed it to be simpler and have a URL to be put on business cards. The primary motivation was just to be practical. At Emerson we have different types of art organizations. We wanted to focus on the contemporary art of this program, and create something easily identifiable to people.

There are four parts to it. The Media Art Gallery, Huret & Spector Gallery, public programs, and art on campus.

Q: There were two webinars this fall titled Art and Healing. Why that title?

Bradbury: These are two artist spotlights. This is something I’ve been thinking about, not just because of COVID, in the socio-political environment we’re in — What is the role of art? How can art help make it more bearable? I thought it was a good series to bring to Emerson.

The Nyugen Smith exhibit is at different locations throughout campus. It’s meeting students where they are. We designed an exhibit even if the gallery is closed. We’re having art in 2 Boylston Place, Little Building, in windows of the gallery, and Tufte building. This exhibit runs through November 24.

Also, it’s on TV monitors at the Ansin Building in TV elevator bays and at the Walker Building, instead of an ad, it’s one minute of artwork. It’s being seen where the EmChannel is on monitors, it’s part of the programming [on those television screens].

Nyugen Smith’s exhibit Bundlehouse: Rising into Something Else, comes from The Water Dancer, a story of a slave trying to save the slave master’s son from drowning. It’s about water, as a history, a culture, and how water has played a role, and specifically a role to Black Americans. It’s the feeling of going under water, but feeling an inner strength to reemerge. That feeling is something a lot of people can feel right now. Feeling desperation, and in a cultural significant moment.

Q: Please talk about the new Emerson Contemporary blog. Who’s writing and what are they writing about?

Bradbury: It was the idea of our digital marketing coordinator [Bina Ruchi Perino]. It’s cool to have an artist featured to generate content and amplify artists’ work we’re showcasing. The first four entries are in the Art For Tomorrow exhibit. Because of Zoom, we did a virtual studio visit with artists and recorded them, and we were able to use them in a virtual exhibit. Now we can use them and transcribe them into blog posts. It was out of necessity originally, and then we embraced it.

Q: Living or dead, name an artist you’d most want to talk with?

I’ve been a fan of Sze’s work because she makes intricate installations combining video with paper and paintings and everyday objects. I did research on her work, but never met her in person.

I saw Cauleen’s work at MassMOCA. It really moved me. There was a piece there that brought me to tears. One of those things when art really moves you, and I feel like I need to do something. It’s a call to action as a curator, not just something for me to learn there, but something I can share with others.

Q: What else should someone know about Emerson Contemporary?

Bradbury: With Emerson Contemporary, one of the things we’ve come to understand is that students have told me they didn’t know the gallery was for them, or that they couldn’t just go in. The Media Art Gallery on Avery Street is free and open to the public. It’s a very unassuming place, you don’t need to check in or buy a ticket. You can just walk in [when there isn’t a pandemic]. Our mission is as a teaching gallery, and at the same time you can explore and learn something new about yourself or art that’s on display.

This summer I curated Area Code, an exhibit that was a video and digital art drive-in project. We used a pop-up movie drive thru theater. We [featured] digital art with a projection on a screen. It was a huge showcase of all types of artists, with some students [as well as] more recognizable names. It was one of the first events people could get together and be able to socially distance and have a shared art experience that was really incredible.

In this time of our spacing not being close, we need to create opportunities for artists to be seen and sell their work. We wanted to create a digital platform. And the digital drive-in was really incredible… to be able to have a community event and showcasing people’s artwork…We’ll probably do it again next year — even with COVID restrictions we were able to make something life-affirming and positive. 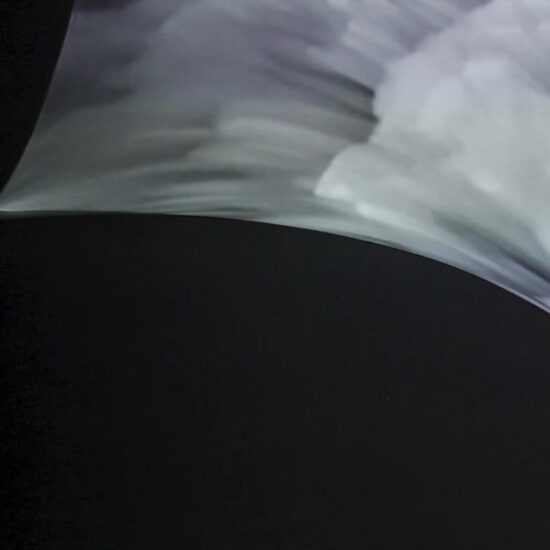