Associate Professor Jabari Asim was honored this week to learn that his essay, Getting It Twisted, is included in The Best American Essays 2019 anthology.

The essay originally appeared in the Yale Review, and was subsequently included as one of the eight essays in Asim’s book We Can’t Breathe: On Black Lives, White Lies and the Art of Survival. Asim said the Yale Review submitted the essay, and Robert Atwan, one of the editors of the yearly anthology, personally let Asim know his essay had been selected. 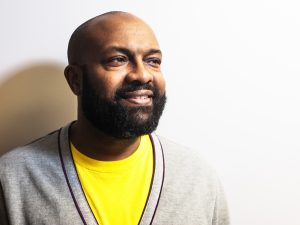 “I think that much of what defines race relations, in particular in the U.S., is conflicting stories,” said Asim. “I was kind of picking up on the idea that Toni Morrison had discussed, talking about the ‘master narrative.’ The master narrative doesn’t depend upon race. It depends upon power, imposing a story on those not in power, or taking stories and distorting them.”

Asim said he states in the essay that in America, white people often take black people’s stories and distort them, make them unavailable or simply challenge them.

“Getting It Twisted explores the relationship between the state – the U.S. government – and the often-malicious narratives about black people in the U.S. that are inaccurate,” said Asim.

Asim said he is drawn to writing essays about the experience of living in a black body and inhabiting a black space where black bodies are seldom seen. He said within the essay he was very lively with his language while also speaking intimately about his personal experiences.

Watch Jabari Asim talk about We Can’t Breathe on WGBH

When asked about Emerson College as it relates to the topic, Asim offered analysis.

“Emerson College is a very white space. People are always commenting on how diverse it is. It might be diverse if you’re white. But I wouldn’t say many people of color find Emerson as that kind of space,” said Asim, MFA Program Director for Writing, Literature and Publishing. “In my classroom – I’ve been here for 10 years – I’ve never taught an African-American male undergrad. I’ve never had one in my class. I’ve had three on the graduate level. That alone argues against the notion it’s a diverse space.”

Asim said he’s taught African-American women at both undergrad and graduate levels, but males of the African diaspora are rarities.

“It’s an experience one is compelled to comment on, if one is a writer,” added Asim.

“Poetry is my first love for sure. I always have a loyalty to poetry. But I grew to really like the other genres,” said Asim. “I was drawn to fiction, but not nonfiction, but once I started doing it, I found how great it could be.”

Asim said he is usually working on multiple writing projects at the same time, and that he’s very systematic when it comes to writing nonfiction, fiction, and children’s books, but not poetry. He writes far less of it compared to the other genres.

“For other forms I sit down and do it in a diligent fashion,” said Asim. “I say I didn’t choose writing, writing chose me. It is not easy work, but it’s joyful work and I’m very happy I’m doing it. I wouldn’t want to be doing anything else.”

Faculty, School of the Arts, Writing Literature and Publishing