New WLP Chair on the Power of the Written Word 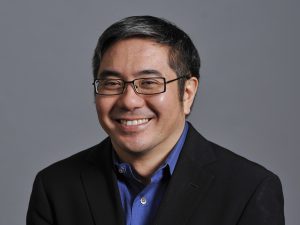 Associate Professor Roy Kamada began his academic career in 1993 as a graduate student at the University of Virginia, teaching poetry in a room on the lawn, which UVA’s founder Thomas Jefferson designed.

The rooms really looked the part of a hallowed academic hall, with dark wood and old chalkboards, Kamada said.

“What struck me so much was the great seriousness with which the institution regarded the exercise of learning to write poems,” he said. “That feeling of really taking what we do with great sincerity and earnestness and trying to communicate and translate that to our students is something I’ve carried with me since those days long, long ago.”

This year, Kamada carries those feelings of “sincerity and earnestness” to the chairmanship of the Writing, Literature and Publishing (WLP) Department, a role he began over the summer, taking over from Professor Maria Koundoura, who is on leave.

Kamada, a specialist in British and multiethnic American literatures, is the author of Postcolonial Romanticisms: Landscape and the Possibilities of Inheritance. A native of Honolulu, Kamada came to Emerson in 2006, after completing his postdoctoral studies at the University of California, Davis.

In an interview with Emerson Today at the start of the semester, Kamada said he thinks the greatest strength of the WLP department is the “energy and enthusiasm” that the students bring to their courses.

“They come to Emerson, and they come to WLP, not … by any accident,” he said. “They come with great direction and great intentionality, and I think our department is a unique configuration of the various ways of engaging with what all the faculty, all the staff, all the students really love, which is … the written word.”

There is a “tremendous hunger” today for ways of communicating that capture the human experience in all its complexity and nuance, Kamada said.

“I think that if we, as an institution, if we, as faculty, if we, as students of the capacity of art to express the human experience know anything, it’s that this is the great growth area and the great need.”

On Move-In Day this year, Kamada said he saw a student with what appeared to be a parent sitting in a car parked along Boylston Street. The incoming student and the parent were holding hands, looking straight ahead.

“It was such a beautiful moment, being with one another and saying goodbye, but looking forward into what they’re both going to be experiencing – having to say goodbye to a part of their life that was now becoming something new,” he said.

“It was such a sweet moment to just witness in passing,” Kamada said before the start of the classes. “I’m just looking forward to … getting to work.”

FacultySchool of the ArtsWriting Literature and Publishing

Struck on Evolution of Local News for The Christian Science Monitor