Connect with:
Subscribe
HomeNews & StoriesAsk The Archivist: What Were the Southwick Recitals?
News & Stories
1382 seen

Ask The Archivist: What Were the Southwick Recitals? 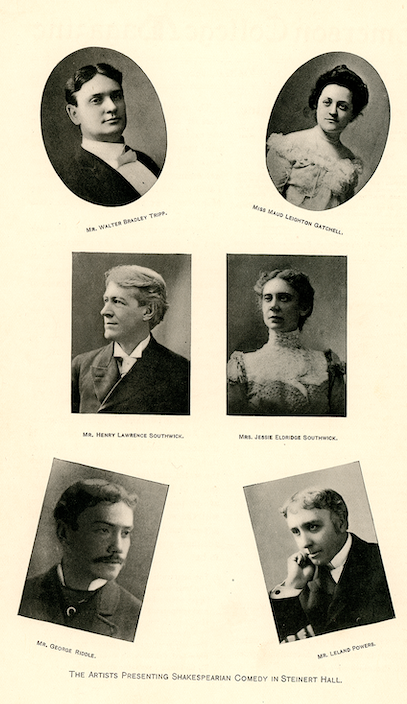 In 1900, one of the most popular forms of public entertainment was the recital, in which an individual would single-handedly perform a play, musical, novel, or poem. At this time, Henry Lawrence Southwick, a widely regarded performer, was dean of Emerson College.

After seeing the success of previous recitals at and around Emerson College, he decided to create an annual series of such events. Bringing in performers of the highest caliber would provide the College’s oratory students with excellent models to emulate, and would also add to the literary entertainment provided to the Boston public. Furthermore, charging for entrance would provide the College with funds for important projects.

The first season of recitals took place weekly in October and November of 1900, and was titled the “Shakespeare Course” due to its focus on Shakespearean works. Emerson faculty members — including Southwick himself — comprised the majority of individuals selected to perform such plays as The Taming of the Shrew and As You Like It.

The performances were widely attended by both students and the general public, and received excellent reviews in the Boston press. According to the Boston Evening Transcript, for example, the season was “a literary and artistic success.”[1] The proceeds from the performances went toward purchasing new books for the library, allowing the College to expand its holdings significantly.

The success of the first season prompted another season to be scheduled in 1901, with proceeds going to a scholarship fund. Over the next 30 years, the annual series of recitals continued, with faculty, students, and outside performers presenting plays, novels, and poetry. The name of the series changed several times, and the audience grew continually larger, prompting the need for an auditorium that would hold up to 700 people.

Southwick died in 1932, and the name of the series was changed to the Southwick Artists’ Recital Course in his honor. The College stopped charging for admission in the 1940s, and by the 1960s, the recitals were so popular that additional viewings were needed to accommodate everyone interested in attending them.

The College continued to present the Southwick Recitals on a yearly basis until 2002, after which they were produced more sporadically by faculty member John D. Anderson. The last performance took place in 2015.

This made it one of the oldest and longest running series in the Greater Boston area. Such renowned performers as Solomon H. Clark, Charles Townsend Copeland, June Hamblin Mitchell, and Emerson’s Kenneth Crannell performed many different types of works, from My Fair Lady to the novels of Charles Dickens.

The Emerson College Archives and Special Collections has digitized many of the recitals that took place between 1969 and 2001.View these recitals on YouTube.

Jenn Williams is head of archives and special collections at Emerson.