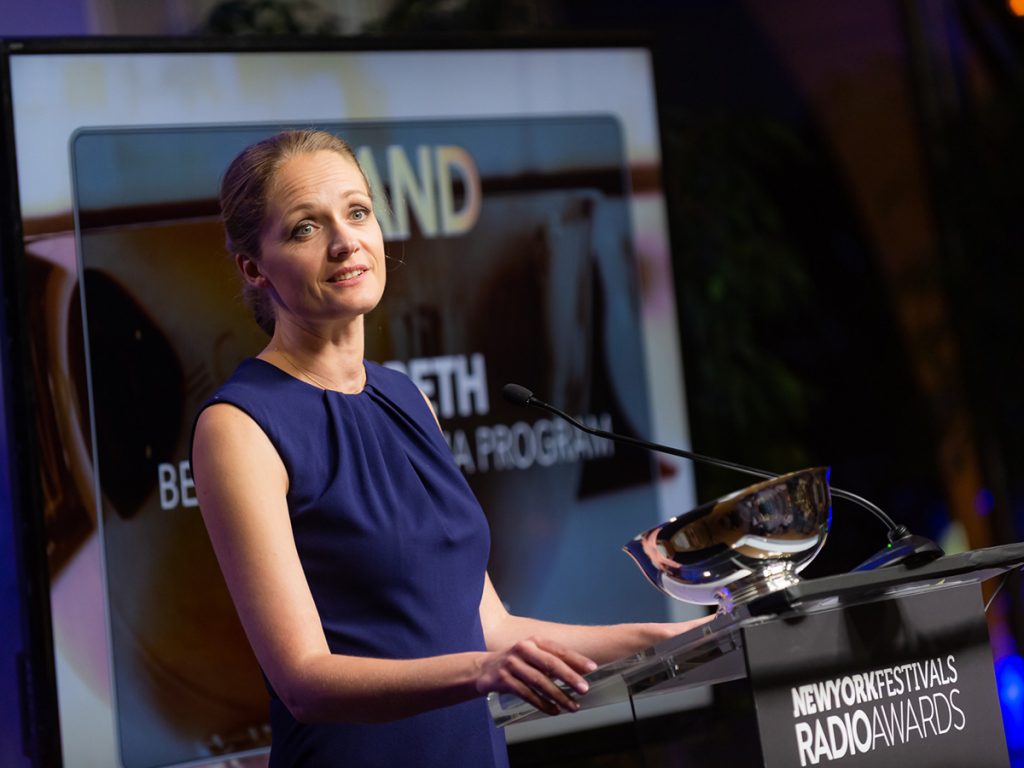 The Scottish Play also took home Best Drama Podcast, Best Sound Design, Best Director, and Best Digital Drama, and Almost Tangible won Production Company of the Year, from the NYF, which honors audio content from around the world, across all platforms.

Emerson Today talked to Melén about producing dramatic podcasts, how she got into audio, and her time at Emerson.

Congratulations on your New York Festivals Radio Awards! What was your reaction when you learned Almost Tangible won?

Huge excitement and pride in the team behind Macbeth. The awards are a testimony to the talent and hard work of everyone involved, I am so grateful to the NYF Grand Jury members who voted for us!

How did you make your way to audio production?

A huge part of my actor training was voice work, it has always played a big part in how I think about performance, and so the leap to audio wasn’t that big. I became fascinated by the visceral experience audio can be, the intimacy of connection with the listener and their imagination, the unique impact it has on the individual. I founded Almost Tangible to follow this fascination to the end-point really, an artistic quest to make audio the absolute best it can be, to make “audio you feel.”

Why did you select Macbeth for your first production? Is there something about this play that especially lends itself to the podcast format?

Macbeth is such a powerful and iconic story — what happens when a person lets ambition prevail over all else — it can seem larger than life and unreal (even though it’s frighteningly real in its relevance!).  We wanted to make it more relatable by putting our listeners at the heart of the story, immerse them “up close and personal” so that they would really feel and experience Macbeth’s journey from war hero to tyrant — the ambition, the power, the passion, the betrayal – and the price it costs in human lives and suffering.

Most plays and stories will lend themselves to the podcast format I think – if you let them.  For Macbeth, we had to free ourselves from the five-act structure and really look at where the best start/end points for each episode were. There were long discussions with strong opinions, but in the end the four-part structure emerged and just seemed like it couldn’t be any other way.

Did the cast and crew come from radio or were they primarily stage/screen actors prior to this production?

The crew was mainly from a radio background, whilst the cast all had stage/screen backgrounds with varying levels of experience in audio work. We very much work as an ensemble, so our key criteria is a collaboratively generous spirit, a willingness to experiment, and a passion for seeing where audio can go. We had the most amazing time recording Macbeth – it was hard work but so much creative fun.

You used binaural sound recording for the podcast. What is that and what does it mean for the listening experience?

Binaural sound recording replicates the way our ears work. The end result is very naturalistic and makes the listener feel like they are at the heart of the action, next to the characters and immersed in the story. It’s part of the reason we record on location — we get these amazing multi-layered 3D soundscapes which translates into extraordinary surround sound for the listener.

Macbeth was recorded at Glamis Castle, where the story is set. What did that lend to the performance?

On location recording is key for us in all our projects – the authenticity and freedom of the experience and the effect this has on the breath and the body absolutely translates through the voice and so we always aim to immerse ourselves in order to immerse our listeners.  Saying that, being at Glamis Castle was especially significant, we all felt so fortunate to be there and so inspired – we were touching history with every step we took and in every room we went.

When we think of podcasts (at least in the U.S.) we often think of true crime series, talk shows, or programs that cover niche interests. How do you see dramatic narratives of the type Almost Tangible produces fitting into and growing in that landscape?

Artists will always have stories to tell and podcasting provides an accessible way to get the stories out there in the ether, it’s no surprise audio fiction podcasts are on the rise!  The Achilles heel is that audio fiction is more expensive to produce, it’s harder to cover costs through donations from individuals or sponsors, never mind pay people a living wage…and so overall I think audio fiction podcasts will become similar to fringe theatre – a really important space for artists to hone their craft and try out/develop ideas, a calling-card and a potential launch-pad into commercially produced projects.

By extension, I think audio fiction podcasts will play an important part in the journey towards paid-for quality audio experiences — much like Netflix raised the perceived value of television – by building dedicated, loyal fan-bases that will be prepared to spend money to hear what they want to hear.

How did your time at Emerson shape your career as an actor and/or an entrepreneur? Are there any memories, courses, professors that stand out?

I was incredibly fortunate to have Kristin Linklater as my voice teacher for four years – her voice method is the foundation for how I approach performance and the genesis of my quest for authenticity and transparency of voices in communicating thoughts and emotions. I’m still in touch with Kristin and regularly participate in workshops at her voice centre in Orkney, Scotland, where I’ve also reconnected with Paula Langton and Ken Cheeseman!

Another Emerson teacher I particularly remember and am grateful to is Davis Robinson, whom I had as my physical theatre and scene study teacher – a wonderful, genuinely inspiring mentor and hugely talented performer who taught me so much about devising, timing, and physical comedy.

What’s next for Almost Tangible?

We will continue to build our passionate community of listeners and artist/creators, we are going to Crowdfund to allow us to incubate a number of projects championing new voices and new writing, and we are putting relationships in place with immersive audio brands who want to collaborate with us to create the next generation of audio experiences.