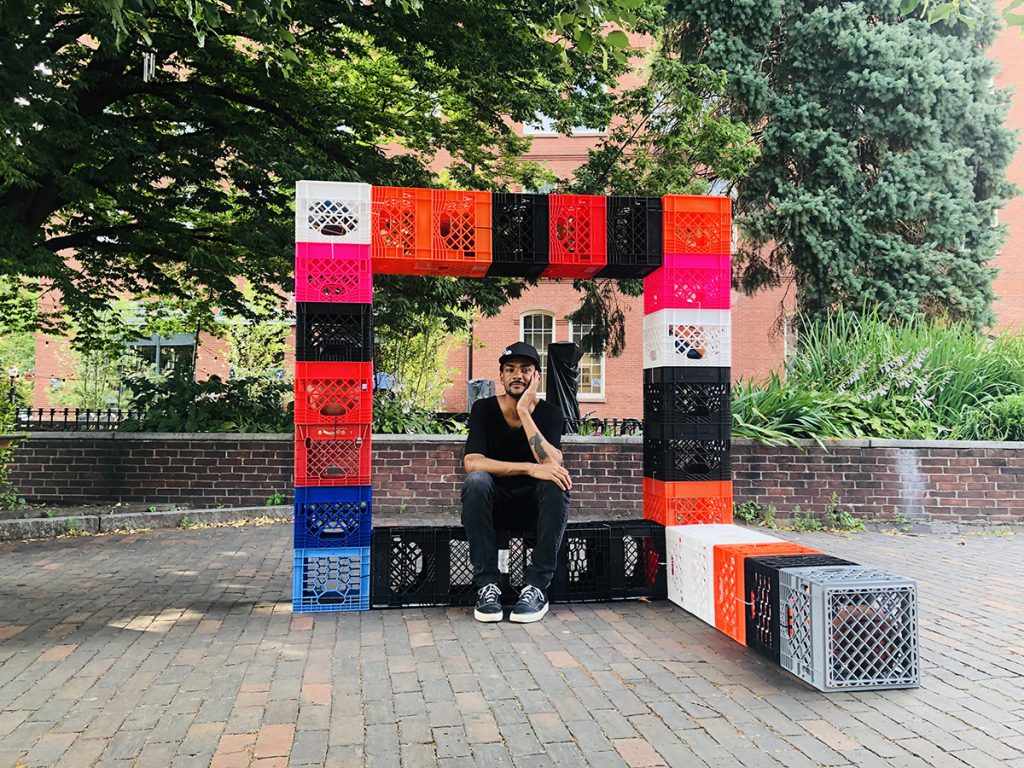 Shaka Dendy MFA ’18 is a public artist in residence at the Boston Centre for the Arts through August 23, 2019. His public art project, Gestures of Incompleteness, combines milk crates and old basketballs.

Do you have an old basketball and want a new one? Then Emerson College alumnus Shaka Dendy’s public art project Gestures of Incompleteness is for you.

Currently, a public artist resident at the Boston Center for the Arts (BCA), Dendy, MFA ’18, is organizing a series of public  drives to collect old basketballs for use in a large-scale sculpture built with milk crates. The sculpture will be located on BCA’s public plaza August 8 to November 10. 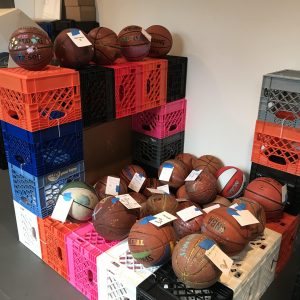 Old basketballs decorated by youth that will be part of the public art sculpture Gestures of Incompleteness.

“The start of it was thinking about people who don’t have access to hoops and use milk crates as stand-in hoops,” said Dendy. “I wanted to bring this history to people who don’t typically have access to art and are pushed to sports and entertainment to achieve something. I’m trying to cross-pollinate these two worlds, and use art as something that is tangible and include the community in this project.”

Dendy is in the community participation part of the project, and has been setting up stations at places including the Roxbury Boys & Girls Club and the Black Market in Dudley Square. His BCE budget provided about 30 new basketballs to distribute, and once word of his project spread, people donated new basketballs. At the public drives he has been giving new basketballs to kids in exchange for their old ones. With parental permission, he is taking the kids’ names and ages so they can be included in the project.

For kids who don’t own a basketball, Dendy is giving them a new basketball, and asking them to decorate one of the old basketballs so they have a personal connection to the project. When the kids come to see the project, they’ll be excited to see their balls and names as part of the sculpture, said Dendy.

“I’m going to put the old basketballs inside the sculpture. It’s made out of milk crates that are kind of attached to each other in big rows and columns that resemble conceptual artist Sol DeWitt’s Incomplete Open Cubes sculpture series,” said Dendy. 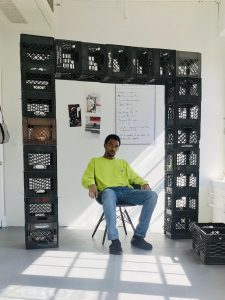 Shaka Dendy wants children to know that they don’t need to be a great painter or sculptor to be a viable artist.

For Dendy, basketballs are part of his childhood and Emerson education.

“I remember my aunt, who lived in Dorchester in the Grove Hall area – there was a milk crate hoop in the alley between two apartment buildings I’d play with my cousins as a kid,” said Dendy, who played basketball up to middle school.

Dendy’s MFA thesis project was also centered around basketball, and he says his public art sculpture is a continuation of his graduate work. His Emerson project was a multimedia piece that included performance, installation, and sculpture pieces.

“The performance piece was that I shot 1,000 consecutive free throws over three hours using different angles, and you could see me getting progressively more and more tired,” said Dendy. That video was played in Emerson Urban Arts: Media Art Gallery on two big screens. “I used my old childhood ball in the performance, and then I used in the sculpture. That’s how I got the idea to use old basketballs.”

While creating his project, Dendy was surprised about one reaction from people – some people thought he hated basketball because he was doing this work focusing on some of the negative aspects sports can have on developing identity.

“I’m trying to be an example of what an artist can do in the community besides painting or taking pictures, and how art can have a direct impact on people’s lives. There are options for success and fulfillment that are more viable and statistically more possible than being a pro athlete,” said Dendy.

And as Dendy wants to foster educating youth about art, his knowledge is also evolving.

“For me, on some level I’ve always been attracted to art,” said Dendy. “But I didn’t know about contemporary art and all the possibilities within it, and then I found out about it and educated myself. I never studied art formally. It came later in life.”

An opening reception and unveiling of Gestures of Incompleteness will be at the BCA Public Plaza, in front of 551 Tremont Street, Boston,  on Thursday, August 8, from 6:00 to 9:00 pm. This event is free and open to the public.

AlumniGraduate and Professional StudiesSchool of the ArtsVisual and Media Arts